Damping material is useful only in sealed subs? Or will it work in ported subs also?

Someone said the Damping material works only in sealed subs but not in ported subs. How far is this correct?

In my specific case, ported sub simulation shows a 3db peak near rolloff.
I can not increase the size of the box. So if I include damping in simulation, the peak is getting eliminated.

So which is correct? Damping material works in ported subs also ? Or only in sealed?
•••

audfrknaveen said:
In my specific case, ported sub simulation shows a 3db peak near rolloff.
I can not increase the size of the box. So if I include damping in simulation, the peak is getting eliminated.
Click to expand...

In your case, the damping is "throwing away" output, converting it to heat to eliminate a peak. The peak could be eliminated by tuning lower.
•••
P

what if it just sounds better with damping? despite some loss of volume maybe?
•••
T

Only reason is because you are taking peaks in response due to a combination of tuning frequency and position in room and room gain. You could probably get the same result with EQ.
•••
B

Damping has to be good for sound quality. I suspect it routinely removes more unwanted sound than wanted sound.

But for a tuned box that is designed to inflate some of the bass sound, should you care to have such a thing in your system, you'll lose some volume in that band. But that can be readily EQ'ed.

Damping has many uses in ported subs. By applying damping, whether stuffing or lining, you will lose efficiency, but gain by -
- Reducing panel vibrations
- Reduce ringing of the box due to reflected sound waves. This leads to higher quality bass, since less reflections will bleed back through the drivers and out of the port
- Reduce the peaks and nulls around the port resonance frequency which allows a smoother response in the upper bass, allowing easier integration with your full range speakers.
- Generally smooths out response, although harder to achieve the lower the frequency.

By stuffing with a breathable type of material, the drivers believe the enclosure is bigger than it is, so in your case might have the effect of lowering the tuning frequency and knocking out the peak you've modelled. Although you might be able to reduce the peak, you'll lose efficiency in general too. I'd suggest doing some research on the types of material. Dont go putting closed cell type foam in there or bitumin lining as this will reduce the effective volume.
•••
A

Thanks for the Interesting points people...
Actually this happened in a whatsapp audio group...

1. Foam or damping material doesn't help below 200Hz since those materials are transparent to those wavelengths.

2. Foam making the box appear bigger may happen in TL boxes, but not in ported boxes.

3. In cases of ported subs, foam doesnt help to absorb standing waves or resonance. Because of low frequencies and large wavelengths.

4. Port is added for exact phaseshift from rear of the driver. Damping messes with this and defeats the very purpose of ported box.

5. Ported subs my loose it's thump with damping.

So these are some points that came up ... Any further explanation on these will be much appreciated !!!!
•••

I think the key here is to remember that you're building a ported SUBWOOFER, not a ported speaker that's intended to operate over a wider range of frequencies.

So, going one by one:

"1. Foam or damping material doesn't help below 200Hz since those materials are transparent to those wavelengths."


*2. Foam making the box appear bigger may happen in TL boxes, but not in ported boxes.*

Nonsense. Does the air in the box somehow know that the box is vented, or a TL? . In any case, Tom Nousaine did a study years ago that showed the stuffing a vented box did reduce Fb. It will however reduce output as well - but this will also happen if you take any vented box, stuffed or not, and reduce Fb. In any case, stuffing a vented box, then trimming the vent to bring Fb back to its original value will still result in reduced output from the system, so I would not recommend using this approach for subwoofers.


*3. In cases of ported subs, foam doesnt help to absorb standing waves or resonance. Because of low frequencies and large wavelengths.*

This is the same as point #1

*4. Port is added for exact phaseshift from rear of the driver. Damping messes with this and defeats the very purpose of ported box.*

See the response to point #2


*5. Ported subs my loose it's thump with damping.*

See the response to point #2

In summary, lining a subwoofer box with foam can achieve positive measurable results, but whether or not that would be audible to you is another matter.
•••
A

Thank you so much for detailed explanation Brain...
Infact, the only reason looking for damping material is because my simulation graph shows 3db peak near rolloff.

Simulation shows that the peak is eliminated with proper damping. I can not make the box bigger due to size limitations. Otherwise, the peak can be eliminated with bigger box even without damping.
•••

audfrknaveen said:
Infact, the only reason looking for damping material is because my simulation graph shows 3db peak near rolloff.
Click to expand...

The room dominates the sub's response. Dips of ~15 db are common. 3dB will get lost, in fact Earl has often said that free field response of sub has very little meaning in room.
•••
S

Again, Data-bass has the data. As I said in post #5, adding fluff reduces the bad sound although trivially lowering the loudness. Might confuse your sim; who cares? Seems a no-brainer.

I am just now starting a new project using 10" full range field coil drivers and posted a question about Plywood vs MDF. I got a LOT of great responses but the one thing someone posted was this video about damping cabinets. It is an engineering approach and it the end he tested Decidamp to deaden cabs. I'll be using it on this build as test results show it kills vibration really well in a CLD configuration.

The damping discussion starts around 27 minutes into the video

Ooops, maybe I misunderstood the OPs intent. I thought he was asking about damping the cabinets vs. the signal.
•••
B

djn said:
Ooops, maybe I misunderstood the OPs intent. I thought he was asking about damping the cabinets vs. the signal.
Click to expand...

Volume damping not walls, at least as per post #1.

But the viscoelastic link you posted in your signature deserves to be more widely known on this forum. Great stuff, although generally used on thin metal sheets, not speaker walls. Variants available from automobile specialty stores made from latex paint stuffed with cork bits.

I like the decidamp because it is also a glue that does not need a ton of pressure to set and is MORE effective with a thinner layer. On my project I am building the speaker cabs with plywood and then gluing on plywood panels to the inside walls so I don't have to cut glued up plywood with the sticky stuff already applied......that messes with the table saw blade.
•••

Some tests and measurements dB v2 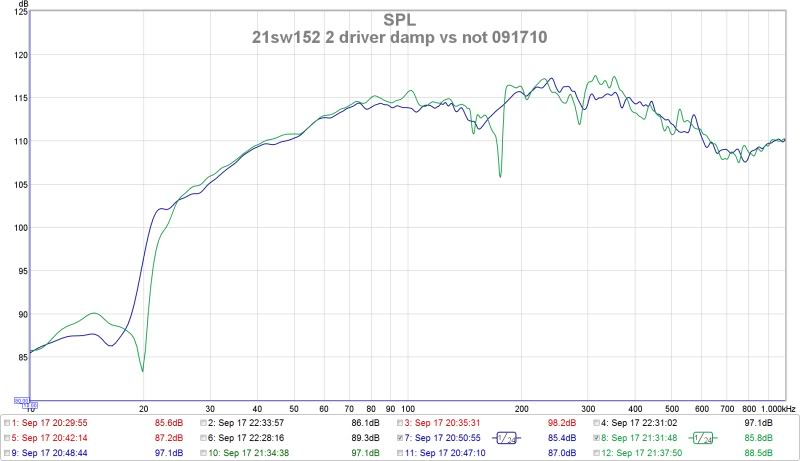 What are those two curves (AKA the good one and the bad one)? I can't make sense of your text.

Clik the link, it comes from there (the pale blue text "dB v2")
That page was linked to earlier by snappyturtle in post #12 Dark purple line is with lining/stuffing, the green one without.