Joined 2004
For a long time I have heard that an ideal sound system should have a flat response across the audible frequency range.
But one day I talked to a friend, a hearing specialist doctor, and he told me that each person has its own characteristic hearing curve, which may vary depending on several factors such as age, exposure to noises, food, lifestyle, etc. And, in addition to these factors, our hearing still differs by nature, because our ears are not like precise instruments and are subject to variations because its individual biological make-up.

After knowing about this, I asked to that friend for some audiometric tests samples performed in his clinic. He gave me a file containing thousands of examinations without identification from several patients, including their ages and genders.

I was impressed with the variety of hearing curves found in those samples showing that each person had his own "hearing fingerprint". It is amazing to see how young people in good health and even children had distinct hearing curves between them too.

In figure 1 below we can see an example of the complexity of a curve based on a hearing of a person aged 23 with healthy habits and a common way of life in a big city. Notice the significant loss that begins to occur at high frequencies. 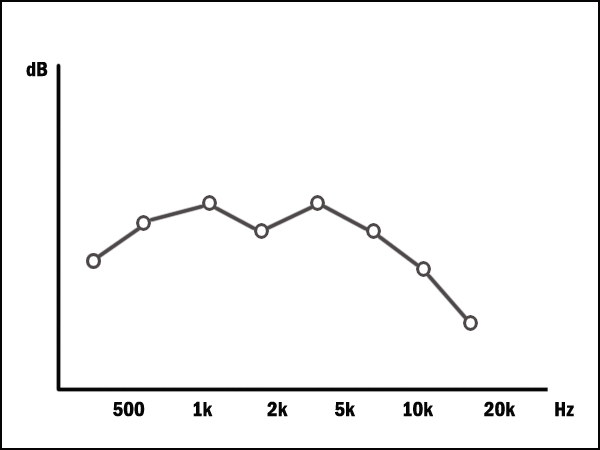 
It made me reflect on the concept of live sound, and think about the validity of bringing to our room the closest reproduction of the live sound listened by our ears , or how much the flat adjustment of a sound system is the correct way to go.

Today I believe that if someone has one or several hearing deviations then he will suffer a similar deviation when hearing a live musical performance, and he will believe that this result is the right reference to adjust his audio system.

However, if we imagine that we can correct this deficiency in our listening, for example, expanding the perception of the lost high frequency in the case of the person here mentioned, then we could recover this loss and make him listen to the sound as it really should be, i.e., the "real sound" and not the "live sound", leading me to conclude that these two concepts are different.

I decided to apply this technique on my own sound system, and after 2 years of experiments I have obtained excellent results in terms of musical listening. Several readers of my blog website and many other friends of our audiophile community have also reported interesting results with these experiments, which have greatly pleased everybody.

Initially, I started my experiences performing a wide range audiometric test, where I got to know my hearing deviations. Then I measured the acoustic reproduction curve of my sound system and its interaction with the room, and with these two results I could identify a “correction curve" to be applied to my system and then adapt it to my hearing characteristics.

After this correction I realized that the sound that I started to listen was no longer the same one that I used to hear in a live performance. It sounded more complete, with more information (details) and less fatiguing.

Initially I started to adjust this curve by modifying the crossover of my speakers, which is not a simple task or even accessible for everyone.
So I decided to try an old 10-band parametric EQ that I had kept at home, but because its old design of the 1980s it introduced some background noise and other problems in my system.

Later I got a DSP device for room correction, which luckily incorporated a parametric digital equalizer with great precision and high quality, and a helpful loudness function to compensate the low sensibility of our ears in the low and high frequencies at low volume. This device expanded my tests and gave me more accurate results to conclude the efficiency of this experiment.
I can now say that I have a customized sound system, suited to my special needs, delivering a unique and vibrant experience that I was not experimenting before.

Today I believe that even the live sounds of a presentation could not be used as an absolute reference for setting my sound system, because it is not really true to my ears.

I am still working on these tests, making adjustments in the systems of friends, and getting some testimonials of experiences made from other users that read the several articles that I posted in my blog website about this subject, with the intention of having a broader understanding of these results.

Let us take a very simple example to better illustrate this point.
Imagine that someone who has a hearing loss starting from the frequency of 5 kHz (and believe me, deviations are usually more complex and more intense than this) as shown in figure 2 below: 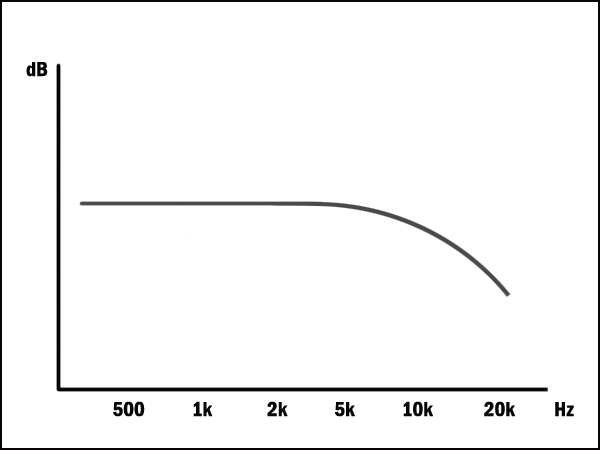 In a live presentation, the listener here imagined will suffer this same deviation to hear the sounds.
Let us suppose, however, that this person had a totally flat sound system at his home (only for easier understanding), as shown in figure 3 below: 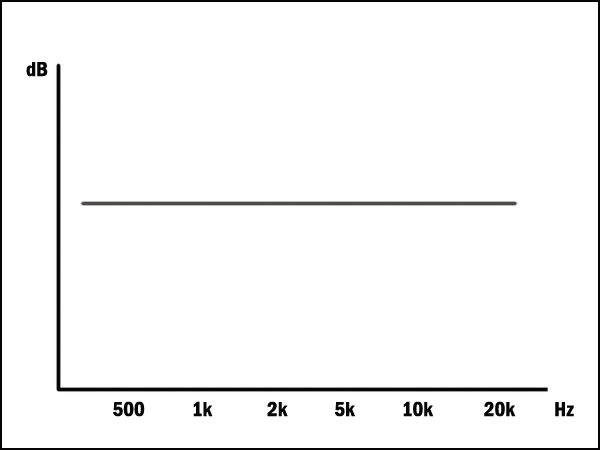 If this listener applies a correction on your system inversely proportional to his loss, he will perceive a sound that could be considered the "true sound”, without the losses that he would perceive even in a live presentation. Under these circumstances, his system should have a frequency response as shown in figure 4 below, but he would perceive a response like that one shown in figure 5. 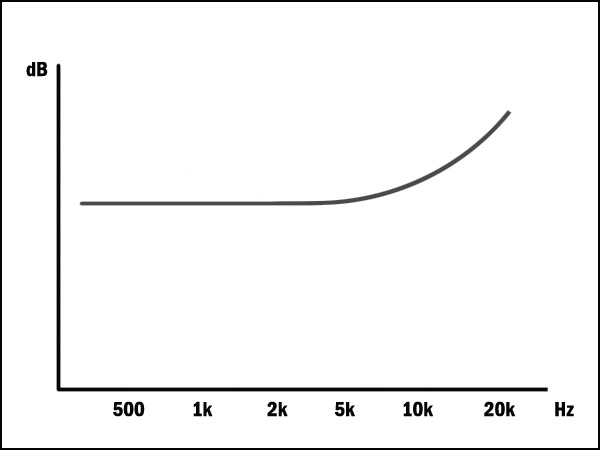 This way to adjust the sound could be closest compared to the use of glasses for vision correction. The real world is also seen as an altered picture for those who have vision problems, and the use of a pair of glasses performs the necessary correction in order to provide a more accurate picture. In other words, in this case, if you wear a pair of glasses to see a picture through a TV set, probably will see a more precise picture than the same picture seen live without glasses.

The examples presented here are merely illustrative for simple understanding. The audiometric tests samples that I looked showed that curves can be much more complex and the hearing sensitivity may vary between the left and the right ears, further complicating the adjustments.

If we had a device to wear in our ears that could precisely correct our hearing curve, we could have a more accurate perception of the live sound, and then have a flat sound system (which obviously includes the room), but for now, we can fix it in our system.

Here´s a suggestion: how about customizing your sound system according to your ears?

For further details about this subject you can visit the website of the author at: www.hifiplanet.com.br (in Portuguese).
•••
E

If you decide to listen to some settings of controls that result in some mathematical scenario then maybe, But if listener X hears live sound, then goes home and adjusts his system so it sounds good to his ear, then math be damned, he has it adjusted right.

I listen to music to please my ears, not my professor.
•••

Joined 2007
The same could be said about people having problems with sight- being it unfocusing or color changing.
It's not that their experience in vision e.g. watching a picture is minor in value than to a personal with a perfect sight; just a difference experience


Edit: oh, you already told that !

Joined 2002
When you listen to a live orchestra, each person's hearing response curve modifies what they hear. Same thing happens when you listen to a recording. So you want the play-back system to be accurate to the live orchestra sound. That way your hearing response curve modifies the play-back the same way it modifies the live sound.
•••

Taking the HF losses above 5kHz on fig.2, everything they hear will have that frequency response curve imposed. Live cymbals will have virtually no content >10kHz according to this listener, and their stereo ought to reflect this.

They might decide to alter the frequency response of their stereo to get back to what they think cymbals ought to sound like, but that way lies insanity.

Speedskater said:
When you listen to a live orchestra, each person's hearing response curve modifies what they hear. Same thing happens when you listen to a recording. So you want the play-back system to be accurate to the live orchestra sound. That way your hearing response curve modifies the play-back the same way it modifies the live sound.
Click to expand...

Joined 2009
I run live sound at our church every sunday, and constantly EQ adjust based on my reference, which is my home system, and vice versa.

Based off REW mic measurments at both locations, MY bias is towards a 3db gain in the highs, and the same in the bass, with a dip in male vocal mid bass region and a dip around 2khz.

IMO, I find that is pleasing to most people as well. But I have to keep my bias in check, too much and people complain. There is a bass hole right where the sound board is, so I have to walk the room to ensure it's not over compensated. But thats another issue.

"Flat" can be considered lifeless or too midrangy. "Flat" is what other sound guys on the volunteer team go for, but it's always less engaging.

Joined 2007
myweb.tiscali.co.uk/g8hqp/
What has PA in an auditorium got to do with music reproduction in the home? The aims are completely different.
•••
E

Joined 2004
If he likes the way it sounds in his home, he can use that as a target for how it ought to sound in the auditorium. Why should he prefer it to be bassier or edgier or whatever-ier live than in the home? I may or may not agree with the philosophy, but it isn't unreasonable.
•••
D

Joined 2007
myweb.tiscali.co.uk/g8hqp/
As I said, the aims are different. In an auditorium intelligibility of speech is the first priority, not pleasure of listening. Of course, it helps if it is also not too offensive to the ears; some PAs have far too much tone control applied so they are horrible to listen to. I always ran my church PA flat, as the room had good acoustics so just needed a little assistance for those sitting near the back.
•••
Show hidden low quality content