I've recently repaired some old woofers (nice quality sound from them) and I have a set of tweeters to match. Now I need to build a box for them (the old box was garbage). Here are the T/S parameters that I measured with REW (I'm mostly confident in my measurement capabilities):
Code:
And here is the impedance curve (if that's needed) 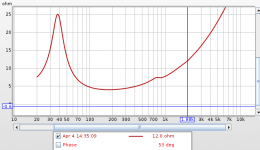 I've always sort of wanted to build a rear-loaded horn enclosure. Although praise for open baffle systems have also piqued my interest. Got any suggestions?
•••

Nobody? Does anyone think this woofer would work in the Frugel Horn MkII?
•••
J

I'd rather get into some interesting box designs rather than simple sealed. Sealed would only be interesting to me if I could make this a nice desktop monitor but 60L is a bit big for a desktop.
•••
J

Given the sealed box requirement, you're going to need about 100L for a ported box tuned in the 30hz range.

I dont deal with horns, sorry I cant help with that.
•••

Any thoughts on aperiodic? Would that help with the size issue?
•••
J

Aperiodic would allow for a smaller sealed box, you're going to have to experiment and measure to figure out what works with that.
•••

stochastic said:
Nobody? Does anyone think this woofer would work in the Frugel Horn MkII?
Click to expand...

No, it requires a much bigger horn since it will be starting with a much larger filter chamber, throat.

GM said:
No, it requires a much bigger horn since it will be starting with a much larger filter chamber, throat.

Okay, would a rear-loaded horn in general be a good design choice?
•••

Sure, for a ‘50s era corner horn or prosound type scoop bin, though a 'BIB' pipe horn can work also depending on how much bass gain you want and/or how high you want to XO it.

Otherwise, some type of TL would be preferred with the mass loaded [vented] MLTL being the most common.

BTW, what is the brand/model?

Hmm, went through the calculations for a BIB and it looks like a folded BIB will be too tall to stand up in my basement suite with 7 foot ceilings. Is there a better rear-horn design that isn't quite as big? Should I fold it multiple times - might be worse performance and be a huge box as well? Really, with a box 18" wide and 25" deep already, folding it again, would be over 4 feet deep, makes me think it's a little unpractical for this speaker.

Open baffle instead? Any thoughts on what makes a good open baffle woofer?

Would aperiodic be my best bet for a small box?

What other options should I look into?
•••

Jay1111 said:
Aperiodic would allow for a smaller sealed box, you're going to have to experiment and measure to figure out what works with that.
Click to expand...

Hmm, a basic small, well stuffed, sealed alignment can't be made aperiodic since it can't damp down the driver's Fs impedance nearly enough, only a heavily stuffed [open or closed] TL or 'ideal' BLH can, which by today’s standards will range from relatively large to ridiculously so.

Of these, the max flat impedance [~aperiodic] open TL [driver at extreme top] is the best performance Vs bulk/build complexity compromise:

34.24” path-length, 196.1”^2 WxD uniformly stuffed along its length with however much stuffing density is required to damp its impedance peak flat, though most just damp them to ‘taste’, which is usually nowhere near aperiodic.

With a ~89.5 Hz base tuning, the trade-off of course is that once stuffed it will have a near I.B. [Vb = at least 10*Vas] response with only a minor amount of extra mid-bass extension, so without significant room gain it will have a progressively rolled off bass below ~70 Hz.

If a 69” path-length closed TL of the same net Vb is used, it will more closely match its I.B. response with a Qt approaching a transient perfect 0.5; a worthy goal for a ~matching impedance system, but not so much with today’s typically highly damped ones.