My name's Mark, I'm from Columbus Ohio and I'm new to the hobby but am quite eager to learn. I guess i'll give a quick bit of background before going into the project. I was introduced to the hobby by a friend and former roommate who had relatives who worked for Parts Express. He had a set of speakers which he had built himself and they were quite impressive. I've always been into DIY as a hobby. I've built furniture including bookshelves, tables, tesks, etc. and have long been into working on and playing with cars (my first love). I had considered building a set of speakers off of some plans on PE a few years ago and even cut the MDF. However, the project never moved beyond that stage. Recently I was bit though.

This project was largely a result of way too much time at work. I was looking online one day and was browsing the website of an electronics company and came across internet radios. I thought to myself, that's kind of a cool idea, but I think I can do it better. I decided to build a sort of "internet" jukebox based around an old Android phone that I had. This would give me the ability to stream music from online sources (Pandora, etc.) as well as play music from the phones internal memory and off of my home network. I decided to keep the project footprint small, to that end I started looking at small speaker designs. I settled on using a modified version of Zaph's HiVi B3N, all of the specs are the same minus enclosure shape. I powered the design using the ubiquitous Lepai 2020.

On to the pictures. 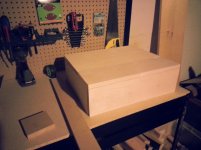 This is showing the basic box layout and base, the bottom, sides, tops, and backs of the speakers are .75 MDF. Internal dimensions are 4x4x9 (I think... it was a while ago that I put this together). Total volume is .13 cft. space in the middle is for the amplifier to reside as well as to allow space for the android device and wiring. 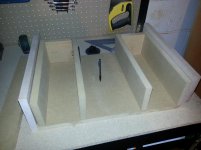 This is with the outside mocked up (sort of). The outside of the box is solid maple, the maple is only glued directly to the MDF on the bottom edge of the bottom piece of the MDF, as well as the front of the enclosures (the front baffle is Maple) 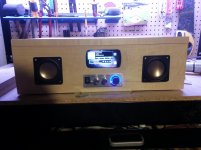 I unfortunately didn't get any pictures of the building phase of the front baffle. However it was created by tracing a the outline of the cell phone, cutting it out and then routing the pattern into the MDF using a pattern bit. On the back side there's a recess for the phone to rest in, allow wiring to pass, and allow access to the power button should it need to be reset. On the front the baffle was opened up enough to allow one to see the screen and hit the soft keys of the phone. I used the fact that Android phones wake from sleep when power is supplied or cut off from the phone to wake it from rest, I attached a normally on momentary switch in line in the USB cable that powers the device. The button is mounted on the back of the box. 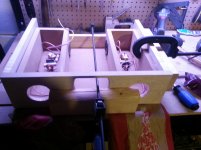 Ubiquitous gluing stuff up shot. Crappily built crossovers included... they work though and are solid. 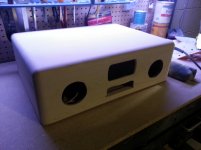 Assembled and sanded box prior to finishing, I decided to give it a big .75 inch roundover on all edges to give it a real vintagey type look, I think it turned out awesome.

This was finished with oil based poly brushed on. 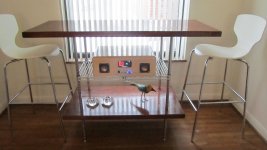 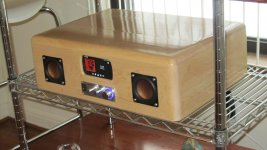 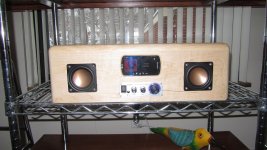 I'm really happy at the way this turned out, it sounds great, although not exactly true hifi. It absolutely shames any commercially available internet radio and ipod dock type system (well at least the ones under $500). Furthermore it was a super fun project and something that I had never seen done before. I think that i'm going to try my hand in the future at another project similar to this, I'd like to try one using a cheap android based tablet pc instead of the cell phone and use larger speakers (something like an overnight sensation built in). I'm also currently building some far more conventional speakers but they're a work in progress.
•••

Why do you need crossovers for a single driver full range?
•••

If you get an android tablet, I highly suggest the samsung galaxy 7.7 OLED.

Its not so much a crossover as a filter. It provides a bit of baffle step compensation and tones down the mids a bit as they can be a bit shoutey
•••
S