I have been working on designing a small active speaker. It's intended for a 3 hour workshop where the participants (mostly kids from 13 and up) can build it themself and bring it home. I'm aiming for a budget of 9$ pr. unit.

The main parts are the Analog Devices SSM2305 class D chip and a Visaton FR7 4 ohm speaker. The circuit includes stereo summing and a volume control.

The PCB has a 2.5 mm jack and a Micro USB connector for power input. I will add a on/off toogle switch but have not decided if is going to disconnect the 5v supply or set the shutdown pin on the chip low. 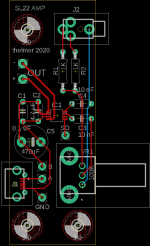 The cabinet will be a 4 liter box made from MDF or plywood. A small metal box with the amplifier made from 2 pieces of aluminum sheet will be attached on top of the box. Here's the raw cabinet. 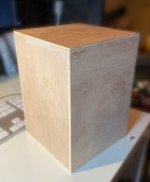 The plan so far is to have all wood cut out and drilled, aluminum sheets bent and the two SMD components mounted beforehand. The workshop participants then have to build the box, solder the 9 THT components and put it all together.

Do you have any comments to the circuit, ideas to cut price or comments in general I would like to hear them.
•••
F

Hi thelmer,
I am very happy to see that such is still being done. I started with electronics at the age of 11 because some engineering students took time to show us kids how to make a 15W (probably best case) mono amplifier with 4 or 5 transistors. Today it would be nothing but for us it was magic. We put it together our self, took it home and it played!!!

I do not know the SSM2305. I have tried the PAM8403 and it is amazingly good and damn cheap (I paid something like 1.30Kr per board). If you like, I can send you a couple of small PAM8403 boards for test. I will happily donate those to such a good purpose.

Good luck with the project. The kids will love it.
•••
D

Nice! Give kids a start in electronics and give them something useful too...

A lot of kids have grown up with no concept of what happens inside the magic boxes they take for granted. We've gone from "This amp is 50 per class A/B" to "You push this button and music comes out" in a very short span of time. I'm all for anything that reverses that trend.
•••

I'm amazed you can do it so cheaply! Great work

You are breeding some budding Frugal-Philes™.

I had a SWTP 20W SS amp I built when I was a kid. I used it for a subwoofer amp - with whatever I could find. I made a label placed by the volume knob "Dig the Bass".

What is the primary driver for keeping the cost so low?

I hate to be the one amping up the cost, but with the expected musical content of 13yr old+ they would likely benefit from something with a little more extension below 200Hz.

It would probably double (gulp) the $9, but an amp with a 12v rail (boost circuit, with small bulk cap) would give +6dB. which could importantly go into a less sensitive / larger driver with more <200Hz extension, maybe with a reflex port to give additional efficiency down below (or a driver with a tighter Q to allow porting). Could still easily run from a 5V/2A input.

That could outperform many cheap bluetooth speakers that they are typically exposed to ! It would be a shame for the units to end up gathering dust?

I would suggest that you ask Analog Devices to donate the SSM2305 parts for your project.
•••

You live in a lucky country.
Here in Germany, the first question would be "how do think you will insure this event?". Children are exposed to electricity. OMG! You will not even come that far to talk about soldering iron or glue. (As any bureaucrat knows: Kids use glue as a drug, sniff it and get addicted.)
If you tell them "it is only 5 Volt, you can lick at it, it only tickles" they will tell you that maybe 25 years ago this was true, but today we know better, electricity is harmful, even in very low doses.
Your word "it is the same voltage as in their smart phones" will be answered "that was supplied by the parents, this is something else. We will not enforce the use of harmful electricity."
Yes, these people have studied at the university, that is why they decide what you are supposed to do, but they are stupid as sh**t. If you are so stupid and insist to explain the truth to them, they will not only cancel your event, but hate and block you in the future live.

Facts do not matter any more, the one in charge decides how things are, the reality has to adjust to her/ his knowledge and ideological view of the world.
Not D. Trump has invented "alternative fact´s", the green-left has used them for centuries.
It is not only the Near East that want´s peoples minds back to middle ages.

My two daughter´s, in 13 years of school, have only touched one tool, except from pen´s and pencils, these where rounded of pairs of scissors at "Art" classes. No hammer, saw, pliers, Nails, screws, drill´s, screwdrivers or knives.

So, congratulations to you and the kid´s, if you can run such an event.
Maybe, and this is no joke, think what happens when a child burns her/his finger. Maybe let the parents sign a "normal risk of live" contract. Not any one knows the hot side of a soldering iron... have a bottle of ICE spray handy. I don´t want you to get lynched.

Even if I dislike Visaton because they overprice most stuff, the FR7 is a very good speaker. It misses the ugly sound of usual small drivers. I used one as a center speaker and it did surprisingly well. If you limit the extend of bass energy (sub 120Hz) it can not use, it play´s surprisingly loud.
•••
T

@all thanks for the kind feedback.

@FauxFrench I have looked at the PAMXXXX chips and they seem to require at least 5 additional supporting components as they emit more EMI that the SSM2305. I have seen some cheap boards without EMI filters, but they are more concerned about cost that meeting regulations. I might take you up on the offer at some point just to compare the two chips.

@jjasniew I will experiment with adding a port and try different materials for the cabinet.

@zerokelvin99 I Try to keep the cost down mainly because the organisers have some budget demands on how much you can spend pr. participant (no user fee). It's also quite fun to have this constraint. I will experiment with a larger driver (FR10HM - 4 ohm) and see if the additional cost of 1.5$ makes a big difference. A more powerfull chip will require more supporting components. My guess is that the driver is the most important upgrade.

@Turbowatch2 I hear you, kids today are overprotected.
•••

Can you beat such an offer? Maybe they will give you a good price for more than one?

thelmer said:
@all thanks for the kind feedback.

Hi thelmer,
Send me a “PM” if you like me to send you a couple of these small PAM8403 boards.

If you defy all shame and admit that you cannot make up anything for $9 with parts that are “Made in Denmark” or even the EU, and you still have a (naive) hope that PostNord can bring the stuff there is another way:
My idea was to actually use the complete PAM8403 board with all the components you need mounted to make a functional amplifier, except for the 470uF or 1000uF power rail decoupling capacitor. The small PAM8403 board you mount directly on a piece of Vero-board (don't use brown Pertinax!) using small pieces of solid wire. For the two power wires you can eventually use the leads of the power decoupling capacitor. This way it is mounted in an efficient place.
On the Vero-board, you mount all the connectors you need and enlarge some mounting holes. If you like a particular output filter, you mount some small filter cokes ( 10 pieces Inducteur de Puissance DIP 6*8mm 6X8mm 2.2UH 4.7UH 10uH 22uH 100uH 330uH 470uH 1MH 2.2MH 4.7MH 10MH D'inductance 2 Broches on AliExpress ) and small 470nF-1uF ceramic capacitors on the Vero-board as well. The PAM8403 board you connect to the other components using solid wire on the rear side of the Vero-board, as it has been done for decades.
Doing it this way, you avoid having to pay for PCB's and mounting of SMD components. Bought out where “fakes” are born, you can do this for around 10DKR.
For the speakers, clearly no DynAudio or the like. Something like this:
2 pouces 6Ohm 3 W gamme complete Mini haut parleur Portable Audio 52mm corne laterale en caoutchouc stereo Woofer haut parleur boite bricolage accessoires 2 pieces-in Portable Haut-parleurs from Electronique on AliExpress
OOTDTY 2 pieces 2 "pouces 53mm 4Ohm 3W gamme complete haut parleur haut parleur de graves stereo nouveau-in Set de haut-parleurs from Electronique on AliExpress
You are still below $9. For the wood, sometimes large wood plates are handed in at the recycle-centres. If you tell them about 100 kids that will be so happy if they can have such plates, their harts will melt and you get the plates.
With free wood you are still below $9 and the remains you can see as salary at an hourly rate that is sadly common in more remote parts of the world.
NB: The PAM8403 boards are pretty small but complete, please see below. No shaky hands.

Out of curiosity, I bought such PAM8403 boards and ended up testing them with my Jamo 707 speakers. At a good sound level but not loud evidently, they just sounded amazing for what it was.

I never can stick anything to budget, so good for you!

At 100pc, you should be able to buy them wholesale or from a distributor (especially if you mention the final goal, sometimes a little promise of mentioning their name as a 'supporter' goes a little way too!)

This should hopefully be able to get you a 'model up' for the same price. Higher Sd, lower FS or lower Qts will all be highly beneficial!
•••

Did you think of printing the layout on both sides of card board?
You punch holes in it for the components and hard wire it, most with the components wires and just a few bridges.
So you do not need a PCB. This way kids see they can build something any time, without complicated etching and drilling. A printer or pencil and some paper is hardly every where.
•••
Show hidden low quality content
You must log in or register to reply here.
Share:
Facebook Twitter Reddit Pinterest Tumblr WhatsApp Email Share Link
Top Bottom