But, i've a noise on my test speakers (Around 50Hz) amplitude of the noise depend of the volume control.

Some test on the amplifier ... 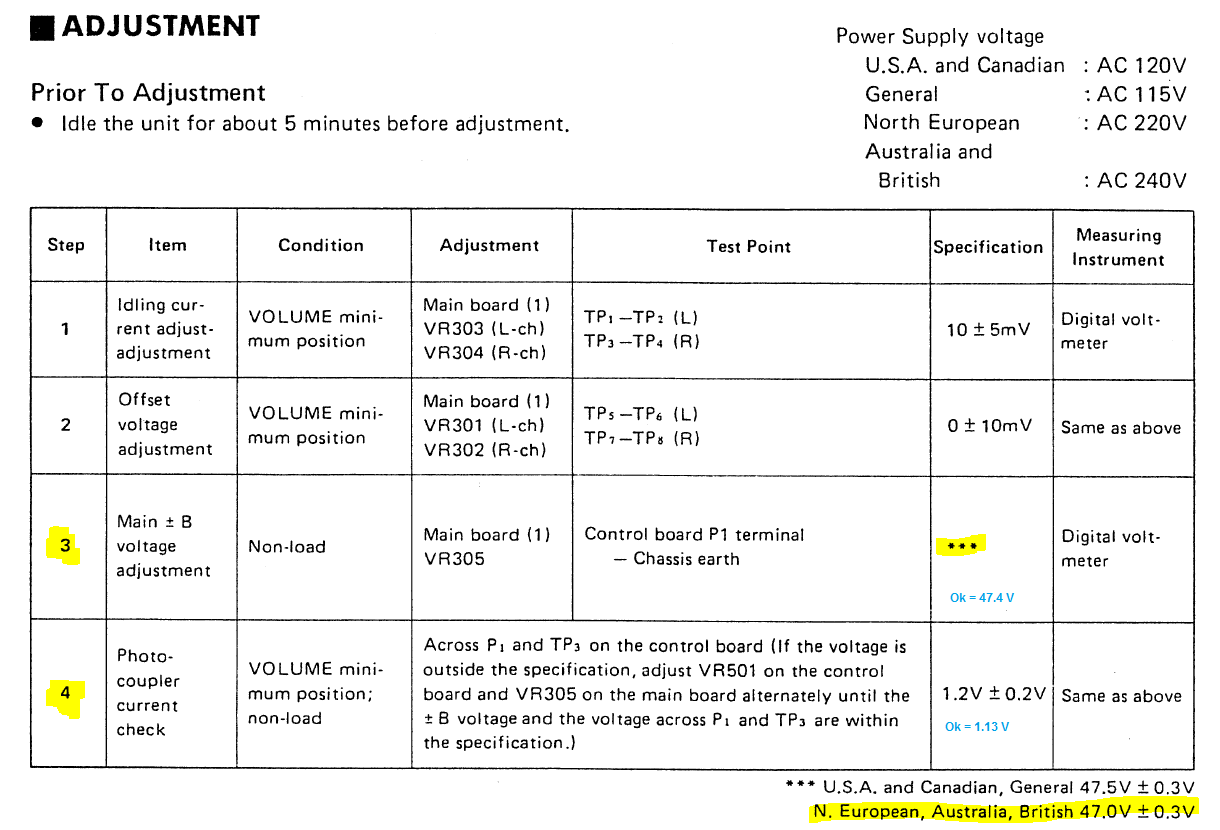 I've the same issue before change filter caps & X2 Caps ... are you any idea ?

Add a power cord with earth ?..

What did you replace the X capacitor with?


This is a nominally double-insulated amplifier that probably doesn't comply with modern regulations, I certainly don't see clear separation in the pictures I've found between mains and low-voltage circuitry.
Adding a mains earth would be an entirely sensible action I think.
•••

I've replace the X2 capacitor with this one HERE

The service manual PDF here if you want : HERE

No risk for the small signals with adding earth point on the chassis ?
Many link between circuit board and chassis ... :\
•••

I think your main culprit for the AC on chassis may be C506 (Control Circuit 2). This is similar to modern switch-mode power supplies.

While I do consider the addition of a 3-wire mains cord a good idea in principle, I would not just blindly slap PE onto chassis - this is just inviting ground loops. Instead, connect PE to the midpoint of C504, 505 and 506 on Control Circuit 2. (There is an inviting jumper wire next to C506.)
This will not only eliminate previous mains leakage via C504||505 - C506 but also give transformer leakage currents a path to earth (the xfmr does not appear to feature a dedicated shield winding so would be likely to have several hundred pF worth of pri-sec coupling, hardly ideal when you've also got this triac voltage regulator thingy generating who knows how much RF noise; it also is where the difference in mains plug polarity comes from, as coupling from each end of the primary coil tends to be different).

I beg to differ re: no clear pri/sec separation - literally the only connection between primary and secondary is via C504||505 - C506, all 6n8 safety caps (I imagine 504 und 505 would be X and 506 Y rated, at least these days). Two of these would have to fail short for chassis to go live (very unlikely), which satisfies the requirements for a Class II device. Everything else appears clearly separated, on different boards even. I've seen dodgier setups. As long as power switch wiring is up to the same standard you should be good. The good folks at Yamaha weren't stupid.

Do inspect the stock strain relief (usually some sort of grommet to be squeezed with pliers) for permissible cable size. You may have to obtain a matching grommet (which hopefully will still fit the hole) and tie a knot into the new cable for strain relief. And before you do all of this, verify that the proposed connection will actually do the trick via a single extra wire to carry PE.
Last edited: 2020-01-24 9:01 pm
•••

Now that's not exactly a major surprise, but it's still nice to hear that it worked.

I assume that having a ground / earth connection (exactly one) anywhere in the system would work just about as well. Back in the day this could have been provided by an external antenna on the tuner, for example. Only leaving the unit to float revealed the issue.

I just noticed that the topology with three 6n8 MP (safety) capacitors is only present on 220/240 V models, while the NA model (115 V) appears to have just two 3n3 high-voltage ceramics, replacing C506 by a plain wire bridge. That would make this mod a bit harder, as C506 would have to be equipped with a typical safety capacitor first (e.g. 4n7-22n Y2). Strictly speaking it wouldn't even have to be a safety cap but with one you'd definitely be protected from badly miswired outlets as well.