Will a cooling fan extend the life of old caps? Or reduce risk of blowing?

I just got an old tube amp going. Frankly all I did was replace the power cord, replace a little electrical tape and install some tubes.
The chasis is not mounted.
I'm going to mount it on a board with some 3/4" rubber feet and am considering installing a cooling fan or possibly two. Through a couple holes in the board.

Will this extend the life of the caps and or transformers?
Or will it just make the inside dusty, thus increasing the likelyhood of a short?
•••

NEVER use cooling fan.
Even if they are "silent" they will ruin everything.
Case may fill up with dust and dust means more heat and cooling fan will turn into noisy useless piece.
•••
B

OK. So the case will fill up with dust, that's what I was thinking.

For the most part I'm not going to be pushing this, but who knows in a year I may bring it to a jam and blow it up after a few hours heavy use. Binge jamming.

BUT... would a cooler case = longer life to old as hell caps? Or do the caps actually need to heat up to work properly? I know the filter on my synth will not run properly unless warmed up.
Would cooler transformers last longer, produce more output or again do they need to be warm? I could put a heatsink on the transformer.

not that I'm going to rush out and put heatsinks all over this, but am I missing something.
•••
R

You should really recap it as you risk the transformers and even tubes.

That said cooling parts does extend their life, including the tubes. If you look at the hot running Sansui 1000A Rec. , many have found it helps to blow the heat out the back with 2 fans and to put reflective foil on the transformers near the output tubes. Also biasing as low as you can go where it still sounds good helps also besides making the tubes last.

12V computer fans run on 6-9v wallwarts are nice and quiet also. Depending how you do it the dust may not be that big a problem. One may have to clean it a bit more, but for sure greater reliability will be had.

Another option is a regular fan blowing over the amp using a light dimmer to slow it down for quietness.

You can buy wisper fans for cooling electronics also.

Just the caps near the tubes get too hot and the same with the output transformer which usually don't get hot.

You could always get fancy and put a filter on the intake where the air comes in on the grill say if you have fans blowiing out back etc. The material used on the more expensive furnace filters that look like paper filters for engine intakes works. I use it on the air intake of my electric grinder to make it last.

I have seen pics where some have put fancy heatsinks on their PS Trans. Some even have cooling tubes and fans.

These are simple and cheap mounted filters with replaceable elements that can keep the dust out if you use a fan.

Frankly all I did was replace the power cord, replace a little electrical tape and install some tubes.
Click to expand...

Why on Earth would there be "a little electrical tape" anywhere near an amplifier? "Black Tape" IMHO is nothing more than a quick and dirty fix for a shoddy "unsafe" cord.

Yes. Everyone says I need to recap. I will recap.

For now I just mounted the amp to a nice piece of cherry that was once the lid to an old console record player.
I drilled about 30 5/8" holes in the deck for ventilation, and used a stack of washers to raise the amp about 1/4 inch off the deck. And yes those are super cheap chinese tubes. 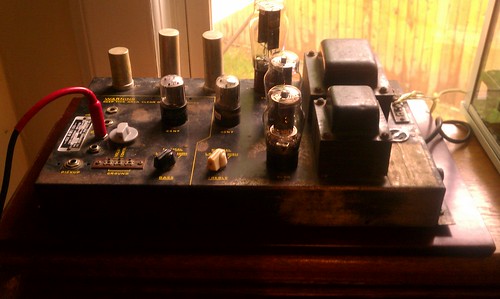 Yeah, the tall cans might boil out the water past cracked rubber seals and short out. Especially if the amp heats up. The rubber might not crack until the pressure builds up.
Having replaced tall cans 3 times in 42 years in my 1961 tube amp, I prefer caps with a long life rating. The longest rated ones I find are 10000 hours, but in tube voltages ratings above 3000 hours are hard to find. These ratings are mostly radial lead caps from Panasonic, Rubicon, Nichicon. I put these under the deck on solder terminal strips, then fill the can holes with metal mesh. See this thread for more details http://www.diyaudio.com/forums/tubes-valves/201265-vintage-magnavox-tube-amp-3.html especially post 23 & 25.
I'm not so proactive about replacing the paper caps, just the electrolytic ones. Dynakit equipment had paper caps pretty well sealed with wax. Mine have held up pretty well. You results may vary. Measure paper caps before replacing, if you have a meter.
When I use fans, I put sticky polyester bats behind them, sold in rolls from mcmaster.com. Can be cut with scissors, $11 a 12' roll. I don't think my tube amp needs them, but it did bake 3 b+ caps dry in 42 years. My ST120 transistor amp does need them, they didn't control gain and leakage current very well for heat.
•••

I've been working with Cornell Dubilier "DCM" series latety. A little pricey, but well worth it.
•••
B

Well, so far it doesn't seem to run hot at all. It warms up though.
Can I guage this just by touching the cans?

Also, the output doesn't seem to me to be more than 5 watts. I don't have an internal watt-o-meter, but comparing to my Valve junior.
The volume pot has no affect above a quarter turn.
So, I'm thinkning I need to clean that pot and possibly replace.

If this thing was ripping I would definately recap right away, but I don't really feel any urgency because of the low output.

The CDE SLPX caps I bought in 2010 came in made in the country of fake baby formula, fake concrete in school ceilings, this week fake chicken meat. So far the SLPX's are fine in my Hammond organ at about 100 hours a year use.
And I have a large collection of dead motor drive enclosures known for dumping the cap slime in the bottom at about the third year and blowing the fuse. They were built with CDE MLPE1192 caps (270 uf 420 VDC) that were the origin of the slime and the short. That manufacturer of motor drives (Semi) is out of business now. Nichicon caps installed in AllenBradley and TB Woods motor drives were known for going at least 10 years, even in hot oven drive compartments.
•••

We cross posts. The way to measure power output of an amp is Vac into a known impedance. P=V^2/R. So measure the resistance of the speaker, then the Vac out of the amp.
Voltage on the plates of the output tubes should be about 85% of what is shown in the tables of the tube datasheet, IMHO. Or 85% of the voltage rating of the capacitors. Each time I replaced my can caps, I first measured the B+ voltage at what should have been maximum wattage. I use a (very compressed) rock & roll station as an input usually when I am measuring power.
IMHO if the can is hot, you are waay too late. The water content can be measured by weight compared to what the cap was when it was new, but of course you have no idea what it was when it was new. When I have an amp not putting out the wattage it is supposed to, first I measure the B+, then if that is okay (usually after the can is changed) then I usually change either the rectifier tube (if it is the limiting part) or the output tubes (if the B+ is totally fine). More rarely, input to the output tube grids can be low due to deteriorated grid coupler caps, but I have never seen that on my dynakit or Hammond clock tube amps. I suppose the driver tubes could be bad, but I've never seen that either. My dynakit ST70 driver tubes were built in 1961, the driver tubes in the H100 organs were built in 1967 and 68.
Last edited: 2013-05-13 11:31 pm
•••
Show hidden low quality content
You must log in or register to reply here.
Share:
Facebook Twitter Reddit Pinterest Tumblr WhatsApp Email Share Link
Top Bottom