Joined 2013
As perhaps a few of you will notice I'm the guy that's asking about Akido preamps. I have a few questions about a preamp I already have.

Can some tell me if the preamp shown in this picture should sound and perform better than the second photo. The preamp section is the PCB to the left of course. 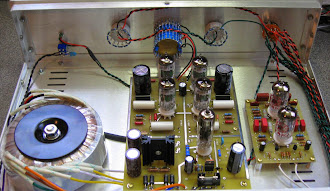 Here is the preamp I received. I was told the only differences between the two was supposed to be cost of the chassis and labor but you can obviously see it has a difference power supply and the caps on the board are different. I'm talking about the orange caps on both sides of the tubes as opposed to the black and white ones in the first photo. 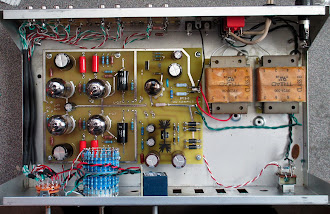 I understand that from the photos you really perhaps can't tell their specs but I was hoping someone could tell just from maybe their appearance.

Again ...I'm curious if the components in the second photo would affect the sonic performance or quality of the preamp.

As soon as I get another job I do plan on buying and building an Akido preamp to use with the tube amp I already have that performs flawlessly.

Joined 2009
AFAIK tubesforhifi used to source their toroid transformers from Antek. Antek had a fire last January or so, and only now has restocked. I suspect the redesign is to use different transformers during the time Anteks were unavailable that will not affect the sound IMHO.

Out of curiousity, which one costs more?
•••
S

Joined 2013
Not sure about the transformers... I was actually more curios about the capacitors.

The preamp I bought was less than the normal price. He said before I saw the photo the price difference was due to using and old Dynaco PAT-4 chassis instead of a new chassis and the labor.

Then I saw the photo and obviously noticed the transformers and he said what you said. He said they are perfectly ok. I accepted his answer. It wasn't until after I got the preamp that I noticed the capacitor difference.

Joined 2013
Ok...but I'd like to know if the orange caps in mine are going to somehow change the sound quality in some way over the ones he shows in the preamp in the second photo? Or perhaps be caps that don't last as long or in some way is of different quality than ones in the other photo?
•••
M

Joined 2008
kaizerpowerelectronics.dk
The white capacitors and orange drop capacitors are likely to be the same thing, both are polypropylene and metallized film capacitors, as far as I can tell from your small pictures.

I use the orange drops myself in my amp and would never ask for anything different, my approach to amps is the engineer, no gold plated super colouring sound stage sonic enhancement capacitors of audiofulness used here.
•••
S

Joined 2013
I didn't see how to add photos that enlarge when you select them. Sorry about that. Perhaps that because of the way I saved them on Google.

I was just concerned that the orange caps were not as good of a quality as the others shown. That and the sound quality.

I'm still going to build an Akido 12 Vac preamp based on the John Broskie PCB to help me learn more about electronics.