Joined 2008
murtonpikesystems.co.uk
For your faulty amplifier add a diode, that should rectify the problem.

She was only the electronic engineers daughter but no one could resistor.

Galu said:
Haven't you got an ohm to go to Nigel?
Click to expand...

You mean ohm, ohm on the range where the deer and the antelope play ?
•••

Joined 2010
Paid Member
What does as electronic engineer make for breakfast?

Galu said:
What you need Nigel, is a coilfriend!
Click to expand...

And inductor into my life.
•••

Galu said:
What you need Nigel, is a coilfriend!
Click to expand...

I once had a coilfriend who's name was Milli Amp. One day we went for a ride on my megacycle, crossed over the Wheatstone bridge by a flowing current and had a picnic in a magnet field. Afterwards we reversed polarity and blew each other's fuses.
•••

Joined 2008
murtonpikesystems.co.uk
You could say you transformed her ?
•••

Joined 2018
She was only an electronic engineer's daughter, but she had the capacity to conductor self positively in any social circuit.
•••

A helicopter was flying around above Seattle when an electrical malfunction disabled all of the aircraft's electronic navigation and communications equipment.
Due to the clouds and haze, the pilot could not determine the helicopter's position. The pilot saw a tall building, flew toward it, circled, and held up a handwritten sign that said "WHERE AM I?" in large letters. People in the tall building quickly responded to the aircraft, drew a large sign, and held it in a building window. Their sign said "YOU ARE IN A HELICOPTER."

The pilot smiled, waved, looked at his map, determined the course to steer to SEATAC airport, and landed safely. After they were on the ground, the copilot asked the pilot how he had done it.

"I knew it had to be the Microsoft Building because they gave me a technically correct but completely useless answer."
•••

Have the jokes been choked? 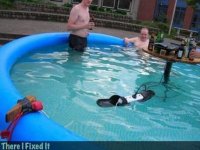 Mura Mura on the wall who makes the best LCD panel of all?
•••
H

Joined 2007
What did the man do when he paid for resistors he bought?

Joined 2018
Wattage was he when he bought his first resistor?
•••
L

No, but some of them are shockingly bad.
•••

lousymusician said:
No, but some of them are shockingly bad.
Click to expand...

What is an electrician’s favourite ice cream flavour?

What is another name for an electrical apprentice?

Why are the electricians always up to date?

Because they are “current specialists”.

Because he couldn’t resistor!

What kind of car does an electrician drive?

What do you call a bad electrician?

Two atoms were walking down the street.
Atom One: Oh no - I've lost an electron!
Atom two: Are you sure?
Atom one: Yes… I'm positive.

The guy who got arrested for eating batteries…. He is to be charged in the morning.

An electrician in Heaven

Two electricians, John and Dave, were working and John up on a scaffold accidently cut off his ear.
He yelled down to Dave…”Hey! look out for my ear I just cut off!”
In a little bit Dave calls up to John, ” is this your ear?”
John looks down and says “Nah! Mine had a pencil behind it!”

While electricians were working outside the old house I had just bought, I busied myself with indoor cleaning.
I had just finished washing the floor when one of the workmen asked to use the toilet.
With dismay I looked from his muddy boots to my newly scrubbed floors.
“Just a minute,” I said, thinking of a quick solution.
“I’ll put down newspapers.”
“That’s all right, lady,” he responded. “I’m already trained.”
Construction Workers Understand


Four surgeons are discussing who makes the best type of surgery patient.
The first surgeon says, “I like to see accountants on my operating table, because when you open them up, everything inside is numbered.”
The second responds, “Yeah, but you should try electricians! Everything inside them is colour coded.”
The third surgeon says, “No, I really think librarians are the best; everything inside them is in alphabetical order.”
The fourth surgeon chimes in: “You know, I like construction workers ~ they seem to understand when you have a few parts left over at the end and when the job takes longer than you said it would.”

Strong Man on the Job

The strong young man at the construction site was bragging that he could out do anyone in a feat of strength. He made a special case of making fun of one of the older workmen. After several minutes, the older worker had had enough. “Why don’t you put your money where your mouth is,” he said.
“I will bet a week’s wages that I can haul something in a wheelbarrow over to that outbuilding that you won’t be able to wheel back.”
“You’re on, old man,” the braggart replied. “Let’s see what you got.”
The old man reached out and grabbed the wheelbarrow by the handles.
Then, nodding to the young man, he said, “All right, Get in.”

An electrician walks onto a job site of a large company and hands the foreman his application.
The foreman begins to scan the sheet, and notices that the applicant has been fired from every job he has ever held. “I must say,” says the foreman, “your work history is terrible.
You’ve been fired from every job.” “Yes,” says the sparky. “Well,” continues the foreman,
“there’s not much positive in that.” “Hey!” says the guy as he pokes the application. “At least I’m not a quitter.”
•••
D