You want POWER..come and get it

This was a hard decision to do..but here it goes.

I'm getting a little old (tired and retired) and I have had a lot of fun with tubes. For more than thirty year's ago I created... A unique amplifier based on 'sweep tubes'. I have made a lot of amplifiers with standard audio-tubes, but despite they worked fine I wasn't satisfied.

Me and my friends wanted more 'juice' more current, insane drive to demanding loudspeakers. That resulted in totally new amplifier based on PL519. The big issue was to determine the plate to plate load. After a lot of thinking and calculating (it took least a year) I got the result...about 1900ohm. It produces about 80-90W and a hell lot of current. These tubes are able to short term deliver 2,5A cathode current (on the secondary of OPT..25A)...that's a lot more than any other tube amplifier...so beware of your loudspeaker.

One dude burned out his Quad ESL67 and I had warned him, but he said they had more than one protection system and could not be harmed. Well... they could...they caught fire. It cost a lot to fix that loud-speaker...he never asked me to pay. The amplifier wasn't harmed and is still in service 30years later.

Some values are missing but it should not be a problem for qualified persons who would build it.

The benefit of this amplifier

Many tube amplifiers become unstable when pushed hard and make bass unit swing uncontrollable at ultra low frequencies because of DC charging of the coupling capacitors (or changes in the DC charge and slow recovery). Combined with high feed back causes the tubes go into saturation and due to the capacitors the amplifier get slow recovery which is bad ... really bad.

My amp has only 2 coupling capacitors in symmetrical curcuit which means no DC blocking. Therefore my amplifier remain stable no matter how hard you push it. This is very important for providing high power...in fact it make the amplifiers performence better in any respect.

Low primary impedance OPT...you should know what this means to the OPT.

Low B+ 300V. That means a lot. Easy to get capacitors and they can be paralleled. I hate capacitors in serie. The tubes last loooong...10year's or more.

Ultralinear amps need less loop feedback in order to work, and in some cases don't need any at all. To much global feed back adds brightness to almost any amplifier, so if you can run it with low GNFB you can have a more relaxed presentation like The Final Amp.

Very low Z-out. Damping factor about 40 and current to keep it there.

I do not claim to have invented the curcuitry, but I claim to have developed a unique amplifier by combination of curcuit, tube choice, OPT impedance, AND the outcome.

The driver-stage has to swing near 200Vpp (which it can).

Some tendency to oscillate..depending on OPT. You should know to stop that. Its because the screen-grid is to sensitive. I can give some hint.
Edit; Have tried EL509JJ and no problem.

You need to use Oscilloscope, dummy-load, distortion analyzer...in order to check and adjust it. Cathode resistor in fase-splitter depend on what tube you use. You have found it when voltages on plates are set. It could also be replaced with a CCS.

Some people might tell you that PL519 is not suitable for Ultra Linear purpose because of the screen-grid voltage. I understand why..but in 3 decades I have never had one broken tube because of that...so..it works.

Most of tube amp's signal-circuitry carry no current and only thin unscreened silver-plated wire are used here...in order to keep capacitances down...and no hum...not the least.

Mine and others' experience:
Extremely dynamic...gives a feeling that it have unlimited power.
Dangerous...because its difficult to find out how hard you can push it.
Time-consuming; When you start listen to music it almost impossibly to stop again. 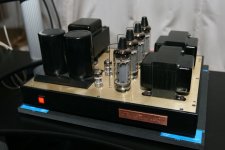 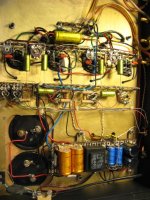 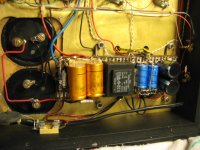 10KHz square. Not much left to whish. You have to fine-tune a 200-400pf over the feed back resistor in order to achieve this square. 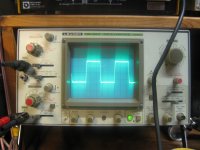 20KHz square. Now its slowing down I don't think I can do better. 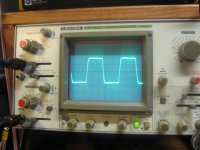 The amplifier under test. 26Vrms 0,5% distortion 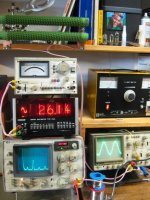 This is interesting.
What OT du you use ? Any sources in scandinavia ?
•••

I got some made..but the company doesn't exist any more. Hammond have some that might fit.
•••

Love the nixie tube voltmeter! It looks like a nice amp as well.

Really like the tube caps. Where did you got those?
•••

In terms of alternative output transformers maybe something off the shelf from Lundahl would suit.
•••
R

Very nice. What does the square wave response look like? It may be useful to include
output tube grid and/or screen resistors to increase stability.
•••

nice design, where did you get the OPT with 40% taps ? for the grids

Thank you for sharing this design with exceptional results.

Valve watts for some reason seem to be louder than SS watts.
I had a 100 watts Simm-Watts PA amplifier that blew away my 100 watt solid state amp.
•••

I really try to avoid drinking the kool-aid on such subjects, but I definitely agree. I think it's due to the distortion spectra/harmonics, but it definitely appears that most competent tube designs will have more usable power output before sound quality begins to suffer.
•••
P

djmiddelkoop said:
Thank you for sharing this design with exceptional results.

Is there a reason why you didn't use any grid stoppers at the PL509 ?
Click to expand...

Theres no need for them. I realyzed that the more simple schematic the better it worked.
•••
G

Did you ever experiment with g2 drive as others have?
•••
P

nice and simple amp, but in this configuration you can not get the power you claim.