Show us you COMPACT tube amps !

I like to realize tube amp projects which are compact-sized...

I am indeed not the only one to like compact tube amps, and some of you have probably built several ones - Please show us your releases, and comment it...

As an example, I start the first : 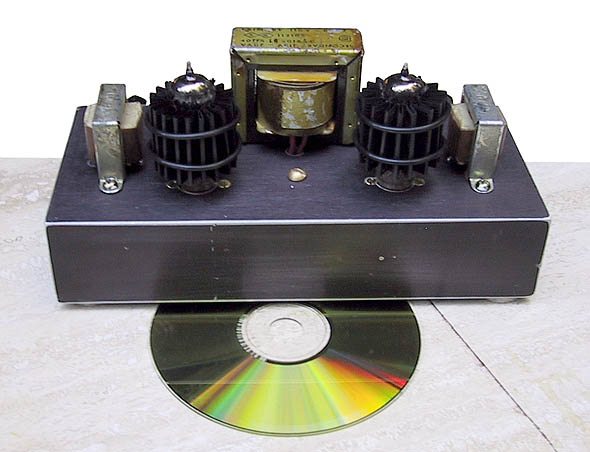 Here's a mock-up of the 6BM8 spud I'm hoping to get around to building any day now... guess that doesn't really count, does it?

The same amp, in the darkness:

Now THAT's an amp I'd be proud to own.

taj said:
Now THAT's an amp I'd be proud to own.
Click to expand...

Sorry; it already belongs to my brother in law...

But I can build for you something like this one:

However, it does not looks compact from outside, but inside it is pretty tight: it contains SS stabilizers for preamp, for screen grids, for bias, and preamp filaments.
http://wavebourn.com/forum/download.php?id=124&f=7
Last edited: 2010-09-18 2:43 am
•••
S

This is my preamps and headphone amps too.

Here's a bitty spud - my "Mighty Mite" amp. It uses the 6LR8 vertical deflection tube, Hammond 125CSE output iron, and a SMPS inside the box. Right now, the thing is set up with the output pentodes in triode mode, but I may change it around to "Schade style" partial feedback to coax some more power out.

This is the rear view...

This is the "Shrine" amp, based on a standard Hammond case that happens to be a 6" cube. This was the first tube amp that I completed (though not the first that I started...). The case was the inspiration for the amp, as I imagined something with all the guts inside and tubes on top, then labored to make the conception a reality. Input is a pair of PN4393 jfets, each cascoded with a 6C4 triode. Outputs are the venerable 1625 beam power tetrode (12V version of 807 - cheap, cheap, cheap) operated in UL mode. Output iron is Edcor GXSE-15-8-5k (old open frame stuff rather than the new product w/end bells). There's an SMPS inside to make everything go. The picture shows the first version with blue LED and plate wires, with Edcor XSE output iron. The current incarnation sports yellow LED and wires (easier on the eye) with the GXSE iron inside, and a new, quieter SMPS.

Wrenchone, any chance to see your SMPS schematics ?
•••

Arnulf said:
Wrenchone, any chance to see your SMPS schematics ?
Click to expand...

I've built switchers but not optimized for tube amp B+

Some nice ones were posted here -

The SMPS schematics wouldn't do much good if you don't have access to the materials and the facilities to make the transformer.
•••

wrenchone said:
The SMPS schematics wouldn't do much good if you don't have access to the materials and the facilities to make the transformer.
Click to expand...


Yes, however we could drool over them! LOL
•••

That is seriously cute Michael.