let me start by saying that I am sure I have called this by the wrong name. Maybe a multi chambered bass reflex design but the first chamber is not ported to outside only the last chamber in line. Something like used by REL in their sub bass systems. I think they call it ARM.
Anyway I am looking for information on this type design and or any possible formulas or programs to help model it.
•••

Hi mrbubbles,
Treat any chambers as bandpass filters. I built some multi-chambered boxes 20 years ago, each vented to the outside. They worked very well. They loaded the woofer over a broader range of frequencies. The one thing you might run into is Doppler distortion. These designs normally can have very low system F3 frequencies.

Thank you for your reply. I am not sure from your wording if you are describing what I am looking for, or if I'm just not understanding what you are telling me. I am not wanting each chamber to be vented to outside, only the last one.
Also Its been about 14 years since I worked with any box design. Back then software was just coming into play and I did most by reading books and a good old trusty TI calculator. So I dont really know how to treat each chamber as a Bandpass filter, right off. Can you point me to some good reading to help me understand better?
•••
D

mrbubbles said:
Anyway I am looking for information on this type design and or any possible formulas or programs to help model it.
Click to expand...

Hornresp can simulate the systems shown below.

Thank you again for your response. I apologize that I was not very clear on exactly what I am looking for. Also I apologize for my photo below showing what I am trying to get. I have a new computer and haven't figured it all out yet so I drew it out and snapped a photo. This is what I am trying to model. Not necessarily the exact number of chambers but would like to be able to model any number of chambers. 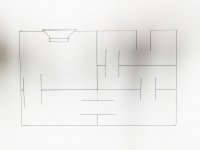 That's too many chambers for Hornresp to sim but Leonard Audio's Transmission Line simulator can simulate every layout in this thread except the 8th order. Akabak can sim them all and much more.

I think you will find that there's a point of diminishing returns when it comes to number of chambers no matter what your goal with using them is. That complex thing you drew isn't going to perform significantly better than a ported box in any way.
•••

Don't recall seeing a design routine for this many chambers, but AkAbak can sim these: Download - Akabak

Thanks very much. I don't know that I would even want to use that many chambers. I just wanted to be sure I made the point that I am thinking of definitely using more than 2.
Im thinking 3 + with the exact number being determined by modeling and seeing where it goes. I want to model it a few ways and mock some cabinets up and see what happens. I guess in my mind I'm seeing this type design somewhat progressively load the speaker, varying with frequency. So in effect it mat keep the speaker somewhat tight but still allow much of a transmission line response at the lower end of the spectrum. I could be way off on this. Like I said I haven't done this sort of thing in many years. But its always fun to play with it and see what happens. Thanks again.
•••
M

One quick question again; Does Akabak work with Windows 10? I am not extremely computer fluent. Only moderately capable. I can work through things but it generally takes me a bit of learning. My new computer is W10 and Im still in the process of learning it as well.
•••
J

Akabak will probably work on Windows 10 just fine, but it needs an emulator. If you are not good with computers this isn't going to be easy for you. You have to install the emulator and then install a 32 bit operating system in the emulator. Some versions of 64 bit windows have a built in emulator but not many.

This is required because Akabak is 20 years old and it's a 16 bit program. It's like trying to run an old Atari game on a new Xbox.

The best option for you would be to pick an old 32 bit windows xp computer out of the garbage or buy one used for $20. Akabak will run very well on that with no need for an emulator.

Akabak has a very steep learning curve, so again, if you aren't good with computers this is going to be a problem. TL.app is super simple to use and very intuitive but there's a few layouts it can't sim, it isn't quite as flexible as Akabak. It will have no problem with the thing you drew though.
•••
M

Ok thanks very much again. maybe I should start with the simpler programs and go from there. I do have a friend who is a "computer nerd" but he is not an audio fanatic. He likes audio but is perfectly happy with off the shelf gear. I can get him to help me with the emulator and such but will have to figure the other out on my own. You've given me three choices so I will try them and see how it goes. Of the three; Leonard Audio's Transmission Line simulator , TL.app, and the Akabak. I assume the Akabak is the most comprehensive and would pay me to learn it, which is going to be the easiest to start with to get me going so I can learn some basics and then progress to the others?
Thank you guys so much for your patience and consideration.
•••
J

Leonard Audio's Transmission Line simulator and TL.app are the same thing. It is by far the easiest program that will simulate what you drew.

Akabak is much harder to learn. And you really have to know what you are doing because it's a text script interface and it doesn't give you a schematic drawing so it's very easy to screw up and simulate something totally different than what you think you are simulating. I avoid Akabak except in situations where I absolutely need it because no other simulator can do what I need. It's a fantastic program but it's a pain to use. It's easy enough once you get the hang of it but it's not user friendly like other simulators.
•••
J

This is an Akabak tutorial and it just covers the absolute basics. Take a look at this and see if it's something you want to get into. This is an investment in time and education, it's not simple like other simulators. Using this tutorial I was up and running in about 2 hours but I'm pretty good with stuff like this and already had a firm background with a variety of other simulators.