when sending the layer Gerber files to the fabricators do they require a file for each layer?

Hi,
Yes. For example a 2 layer board has 7 files

thanks for the reply,

so are 4 layer boards treated as two 2 layer?

problem with the free Eagle software is that it only supports 2 layers so when sending the Gerber files it will only name then top and bottom and not layer 2 and 3 as well.

i have had a look and i'm sure that i can create two 2 layer boards but make it all one board in the end.
•••
R

Bibio said:
i'm sure that i can create two 2 layer boards but make it all one board in the end.
Click to expand...

For a 4 layer board, simply add 2 middle copper layers for a total of 9 files instead of 7. Hope it works out. Sounds tricky.. Ive not used eagle cad.
•••

its a bit of a loooong winded drawn out process but its working. checking the gerber files with a viewer and it looking good

now the big question... will the fab house accept them.
•••
M

PCB houses are pretty flexible. They'll ask you a number of questions if there are problems with the files. If you want, post the gerbers and people/me here can take a quick look at them for you.
•••

thanks Mike, i will do but the basic upshot is components like resistors and such pads are kept on the bottom layer then the second layer they are removed and replaced by drill holes, this goes on till the top layer when the components are then put back in place

bottom layer will be v+ plain and associated components such as power. all pads left on for all components.

middle bottom will be V- plain with all associated components and any traces/pads not able to fit on top two. the other components/pads are then replaced with drill holes.

middle top, will be traces and associated pads of components.

top will be ground plain with all component pads but no traces and silk screen.

in reality i could leave all the pads on all layers but whats the point if not needed.

doing this i can also increase the isolation of pads on each layer. so far without disconnection of such things like by-pass capacitors i'm getting 25mil isolation.
•••

Multi layer boards are just that.

Bibio said:
now the big question... will the fab house accept them.
Click to expand...

thanks rayma, i'll upload it and use them to check it as well.
•••

Bibio said:
. . . if so i think i have found a sneaky way of multi layer boards in the free edition of Eagle
Click to expand...

In concept, you can lay out each layer independently of all the other layers, generate the Gerber file for that layer, then package all the Gerber files in an archive and use it to order boards. The conceptual key, of course, is getting the layer-to-layer registration correct - and that should be easy if you don't move things around in the layout program's coordinate system. On a practical level you are giving up some of the layout program's error checking capability since it will never see all the layers at once.

But it seems like the time and effort required to do this is more than the time required to learn a layout program like KiCAD ( KiCad EDA ) that already has the capability to do multi-layer boards.

Your main problem is not the fabricator but free Eagle which will not accept more than 2 copper layers.

How you intend to use it for 4 functional copper layers is beyond me.

In any case, it looks like an experiment in frustration, even if you could, even small registration errors will make your boards very unreliable ... if they work at all.

i'll give Kicad a try but i have tried others and i just dont gel with them, Eagle is very easy to use due to its tool icons.
•••

just had a play with Kicad... well unless there is a way to import Eagle library's into Kicad then its a no go at the moment. the library is very poor. i can see me using it in the future but right now i dont really want to spend the next 2 months creating components so i can use them.

yes i had a look at importing from Eagle files but its a drawn out process that i dont care to learn right now.
•••

drillegend-stack.ulp give you all the drill sizes of all the holes on components. when its run it will give a legend box on the board sheet. this now lets me put the correct drill hole on the boards. 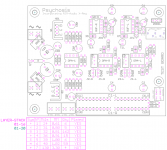 If you're tied to Eagle, it looks like $315 will get you the Standard Layout. That'll handle up to six layers. $575 will get you Schematic + Layout Standard. I do understand that $575 is a fair chunk of change, but is actually pretty low for a schematic + layout package. Have a look at the pricing for Altium or OrCAD for a realistic comparison.

There is a free OrCAD Lite available. OrCAD/Cadence's website says it's "limited" but not what those limitations might be. I'm sure Cadence would let you know if you asked them. Then you'd have to redraw your board in OrCAD, but at least that's an industry standard.

Even if you do end up hacking Eagle to generate the top/bottom and two inner layers as two boards and the PCB manufacturer accepts your files, you're running a lot of risk that you'll end up with useless boards. Fundamental necessities such as a netlist won't work with your approach.

In your situation, I'd bite the bullet and learn KiCad.

Diptrace is a nice option too.
•••