Hello guys, my first time posting here, but have been reading for a while.
I'm working on a boombox build for myself, first one was an anniversary gift for my wife

the build I am starting now will be bigger, louder and more powerful
I just received the amp board today the Tinysine 7500 2.1 ch
I'd like to use 2 DC 160 6.5in and probably 2 5in mid range and 2 1in tweeters.
each sub will have its own ported compartment with tuned tubes.
It will also have a mechanical led projector contraption built into the center isolated from the speakers, similar to the fiberoptics on the first build.
the battery will be a large bank of 18650 cells wired 6s 10p (they're only 1600mAh each so 16Ah in parallel)
I still need to source the balancing board for 6s as well as a charger.

It will be fairly heavy, but it should perform well and make any gathering into a party

what do you guys think of my choice for drivers, I know they're inexpensive, but should they perform okay with a solidly built box?

still working on the steel bezels and internal mechanical parts.

Nice project!
IMO The mini planars are great but need to be crossed at 5k or higher.
I use them with 2x and 4x Visaton frs 8m (€[email protected], heavy for their size), with the planar mounted in the middle just in front of the drivers on the baffle. 2pcs 2-Way Speaker Crossover Filters Hi-Fi Audio Frequency Divider 5000HZ 150W | eBay makes them work together.
You can also find the mini planars without the Dayton brand on aliexpress (cheapest) and ebay for a little less and shipping included but quality control seems to be an issue. (mine are Dayton's)
The mini planars need something to protect them from attracting metal screws etc as they will damage.
If you want something more powerfull, lower to cross and/or better protected have a look at the sounderlink Planars, 2 for €24 2 PCS lot Professional Planar Speaker A transducer HiFi AMT ribbon tweeter 8 Ohm on AliExpress 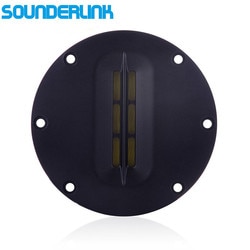