Is there anybody with a schematic of the Audio innovations - The first audio amplifier? Or service manual?

Psychobiker,
There certainly can be full Class A Push Pull.

It simply means that neither tube ever runs into cutoff. As soon as one tube cuts off then thats Class AB.

When one tube cuts off then the effective load seen by the other tube changes from Raa/2 to Raa/4 and it is handling this transistion from class A into Class B that is the one of the major "bug-bears" of Class AB design. Ultralinear Outputs seem to handle this transistion a little better than pentode mode.

There are actually a lot of pure Class A Push Pull Amps out there, particularly with Triode Output.

Then there are also quite a few that claim to be pure Class A but aren't.
In the Guitar Amp world the classic example is the VOX AC30 which was claimed to be full Class A but is'nt.

One of the measures of a good Class AB Amp is actually how much Class A power it can deliver before the transistion into Class B occurs - generally the more the better. This will depend upon the idle current in the output tubes. With higher idle current you can swinf more signal current before a tube runs into cut off, that is more Class A power.

Take that to its obvious conclusion and you see that pure Class A push pull should be much better than Class AB.

I don't know if this is the amp you were looking for. Its a parallel 2A3 Push Pull Class A

thanks for response. But thats not the orginal schematic. The orginal audio innovation use only two 2a3's per channel.

Somebody else maybe with schematic?

I am curious as how the amplifier extracts 12W from two 2A3 valves...


ErikdeBest said:
I am curious as how the amplifier extracts 12W from two 2A3 valves...

It is possible to squeeze out 12W in class-AB. But not in Class-A if you want to stay below Pamax.

But I must say the Straub concept looks nice!
•••
R

Not anyone with a schematic?

Here is a picture of the amplifier

I think the link that gingertube provided is very close to your amp. Scroll down for a picture of the amp and the original hand drawn schematic. 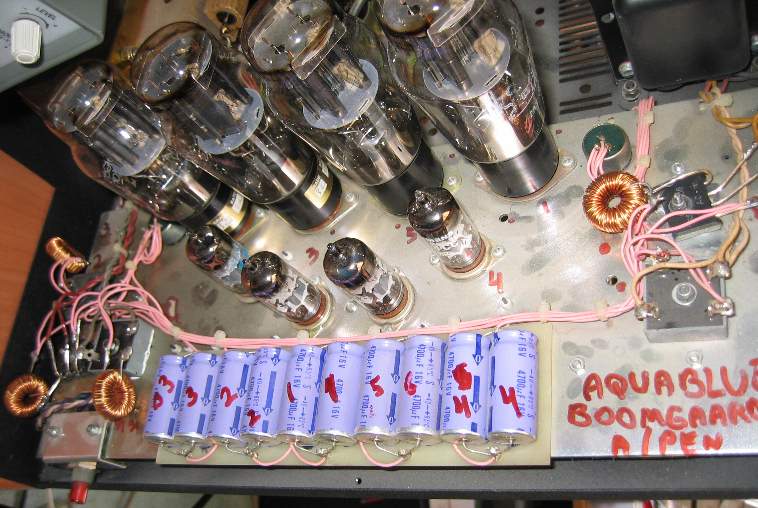 
I came across this thread just now and thought I'd post it - see one poster has schematics for them:

I intend emailing him to get one for my own amp.

the schematic above was for the Second Audio which was slightly different in a number of ways besides being parallel push pull.

The First Audio was just a push/pull design giving 7.5 Watts per channel in Class A

It was available in 3 forms. Initially it was supplied with 6B4G's with an ECC88 input & driver stage. decent NOS 6B4G's became harder to find but the Chinese had started making 2A3's and were able to supply Octal based versions. (New production UX4 bases were also hard to find then, this was the late 1980's! No-one else was using 300B's or 2A3's in any quantities back then.) Finally, the input stage was re-designed using ECC82's and the input sensitivity was slightly reduced.

Here are the schematics for the ECC88/2A3 which is I think the amp pictured above although the LT supplies appear to have been modified.

Not meaning to drag up a dead old post, but after reading this months ago I got very curious about 2a3's in guitar amplifiers.
I contacted Straub since they were the only company I could find that is using them in production. He would not send me the schematic, but he did indicate that he is indeed using the JJ 2a3s to get the power up to 12 watts in class A. He was nice, but vague on the details of the circuit. I think he is onto something with the tones he is getting(his clips are on YouTube: YOUTUBE LINK ) and want to learn more. I like the overdrive tones and how it cleans up with just the guitar volume.
Has anyone gotten a chance to try one of these amps yet, or taken one apart? I would like to know what voltages he is running, and the circuit for the driver tube(6sn7).
•••
R

You do not need JJ to get 12W out. Maybe Straub does not know enough about DHT? The talk about Class-A is usually b-s in the guitaramp-business. What they mean is Class AB, cathode bias.

A pair of std 6B4G will gladly deliver15W in class AB fixed bias.

You ought to have a capable driver though. I would suggest an OS Gibson GA-40 paraphase inverter with at least 400V B+. For guitar use the 12AX7 will work and has high gain.

You also need to add ca 14dB preamp gain compared to a typical Gibson/Fender to compensate for the low sensitivity of the 2A3/6B4G.

Thanks! I really appreciate the input and help.

As you can probably tell from my moniker, I like 2a3's. As much as the 6B4G would be easier to work with, I already have over 40 2a3's in my collection that I want to build with. Plus, is anyone making a 6B4G anymore? Last I heard the russians (sovtek?) stopped manufacturing them and they were the last that I know of?
Straub said that their amp is not cathode biased, which is what intrigued me about his class A claim. I tend to agree with them that fixed bias amps sound better, at least on triodes.
I might just build one up my test setup and see how close I can get using a variable bench supply for experimenting.
•••
R

No problem if you got the 2A3 and sockets. 2A3 might even have a more durable cathode due to the lower heatervoltage. The 6B4Gs(and 6S4S) are cheaper than 2A3 due to that they are not hyped. I have a lot of 6B4Gs so for me it is the other way around. But it does not matter soundwise, same same.

How do you know triode guitaramps sound better with fixed bias when you haven´t tried it yet????? Got a crystal ball?

Just remember the PI needs to be able to swing. So a typical Fenderstyle won´t do.

Let me know when you have tried it out.