Here is the schematic

Does anyone think anymore in the circuit are worth replacing?

Thanks for any help

What cap values have you used there?

Left the values the same.Still love these amps.
•••
I

Yeah, those amps are great! As a matter of fact they are even better than later designs. The Stereophile magazine had been testing RB-991 that has almost the same design as 981 and its replacement RB-1080. I've compared the test results and RB-991 comes as a clear winner. Look at the distortion spectrums and corresponding power levels: 268W for RB-991 and 153W for RB-1080. 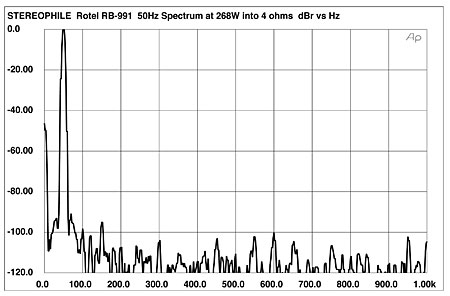 I am planning to get some N/NX caps for my RB-981, 971 and other Rotel gear in the nearest future while I still can. But I got stuck on choosing values. I've already bought some BG N 4,7uF/50V, but I think it might be better to replace those 4,7uF and 10uF with film caps. Besides BG N of those values aren't longer available. But for 100uF there is no choice but only BG N or NX. Type N 100uF/50V I have found only in one store and its price went up from $12 to $18. But there are NX 680uF/35V still available for $14. It should be even better as it's more compact than 100uF/50V, has even higher voltage rating than the original cap and finally it's NX. See, that cap sometime might get the whole power supply voltage on it: 56V. So to be on the safe side it should be rated above that. But Rotel put there 25V cap so I guess they consider it acceptable risk. But I don't feel comfortable to place there cap with lesser voltage rating. What do you think?

BTW regarding emitter resistors: I've seen on the eBay regular sales of MPC-74 that are the same low distortion resistors as MPC-78 but just slightly taller and have 5W rating. However 5W in this application might be even better than 2W used in RB-991.
Last edited: 2009-09-20 11:32 am
•••
S

Still got these amps and now two more.Still like them

Anyone who has them try them with the bottom removable plate off.Def better

I presume the ceramic caps across the rectifier briges are to remove switching noise?

Just gonna rip tops off and check.Think they were Ns and not NXs
Smiffy
•••
S

I just got a second one of these amps after using one for the last 10 years or so. Can't wait to get it hooked up. |Just wondered if you guys had done any more mods and also if you had seen this Speakers (it's about 3/4 of the way down and is about the c601 and 2 caps).

Hi
I replaced nearly all the resistors with Caddock MK132s.I have sinced with other mods picked up a noticeably flabbier bottom end but I put that down to either changing the input caps from 4.7uf to 47uf or the bypass caps I put on the main power caps.I will remove the bypass caps first then change the input caps to see if that helps.Thats my fault for doing all the changes at once but time was an issue.Or maybe the caddocks are just more revealing of the rotels slightly uncontrolled bottom end.I will see soon how the RB981s fare with a pair of Pro Ac Studio 140s MkII
•••
S

Smiffy, what caps have you been using for bypassing main power supply caps?
•••
S