Repurposing a Classic Cassette Deck as a Digital Audio Streamer

I thought that I might share my progress on my repurposed 70's HiFi as a digital Music Streamer project as it is now beginning to gain some momentum.

I have chosen to use my existing RPi3 which I had along with an Allo Digi One hat and a recently acquired 7" touch screen.
After a bit of a tussle I have it running Picoreplayer allowing access to Qobuz and locally stored music files in the Micro SD card. So, all good so far.

Here is a picture of the donor chassis I have a choice of a 1978 JVC or a 1975 Sony Cassette deck, both ebay 'not working' purchases, (Well actually i have since fixed the JVC, loose flywheel issue) so it looks like the Sony is going to be the selected donor. It is also the best made, very solid indeed. 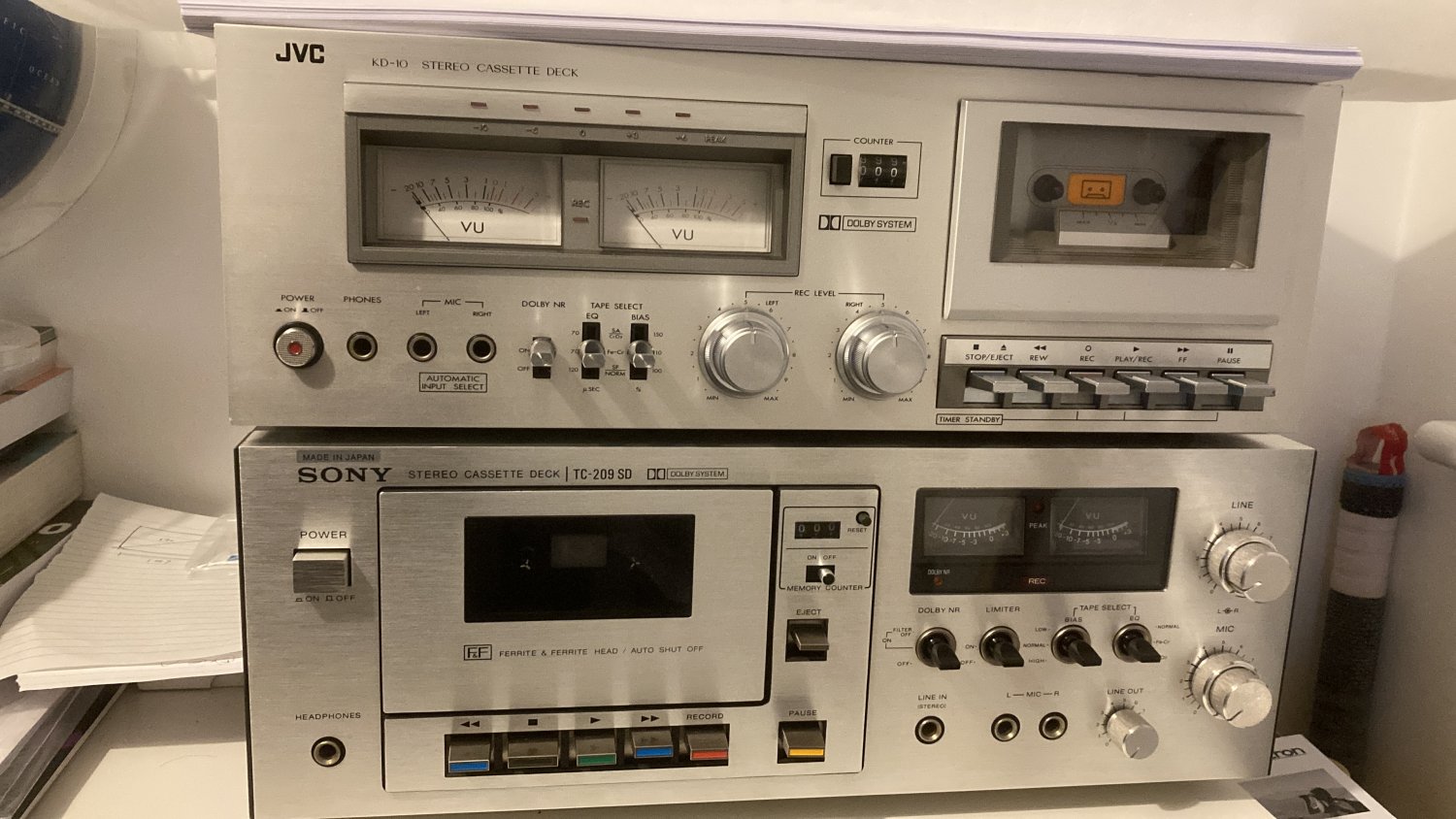 The plan is to remove the cassette mech and put the RPi 7" display behind the front facia in its place. I can see that I am going to need a bigger hole than just that left by the cassette door opening. Careful metal working may be required here! 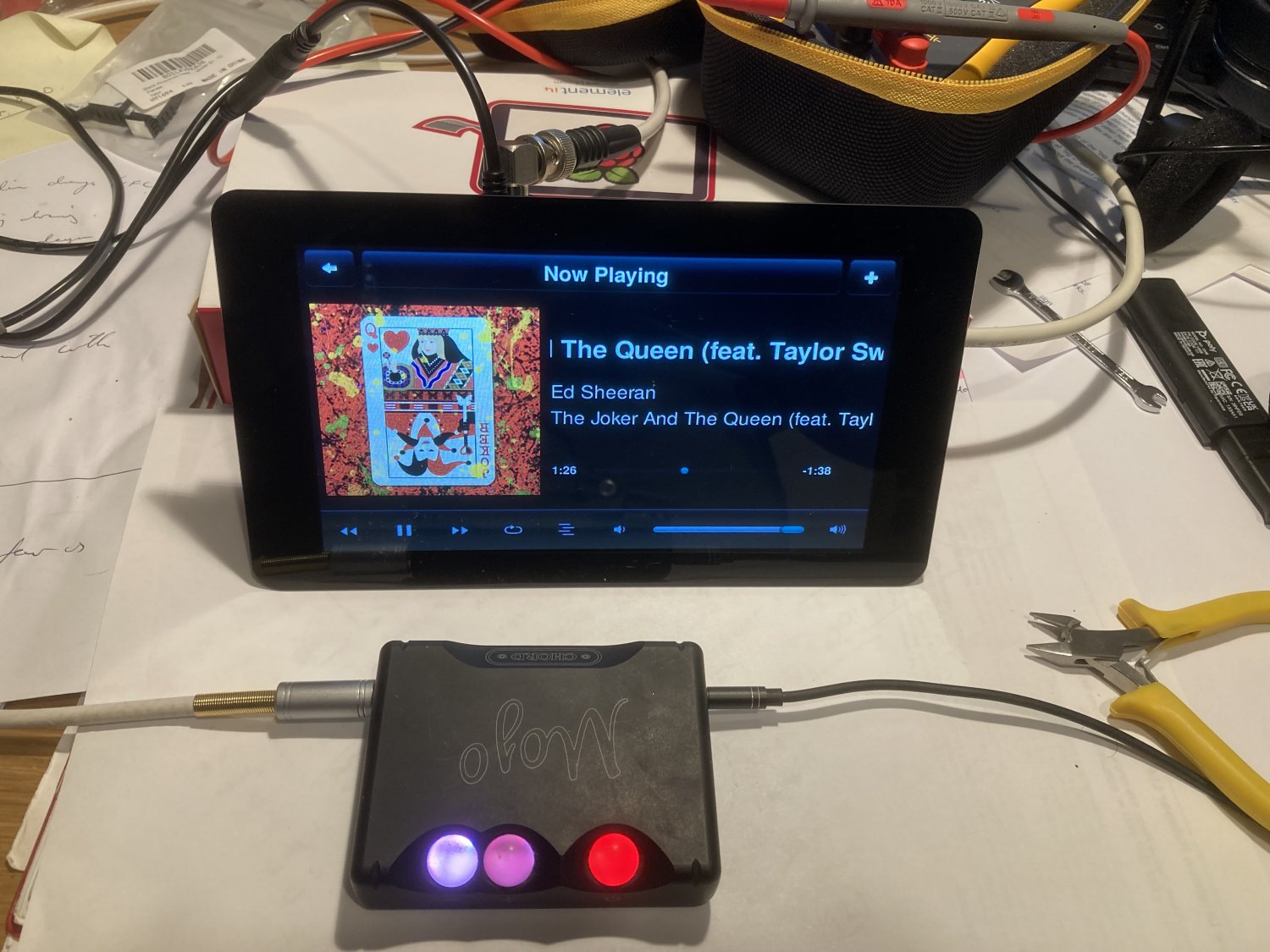 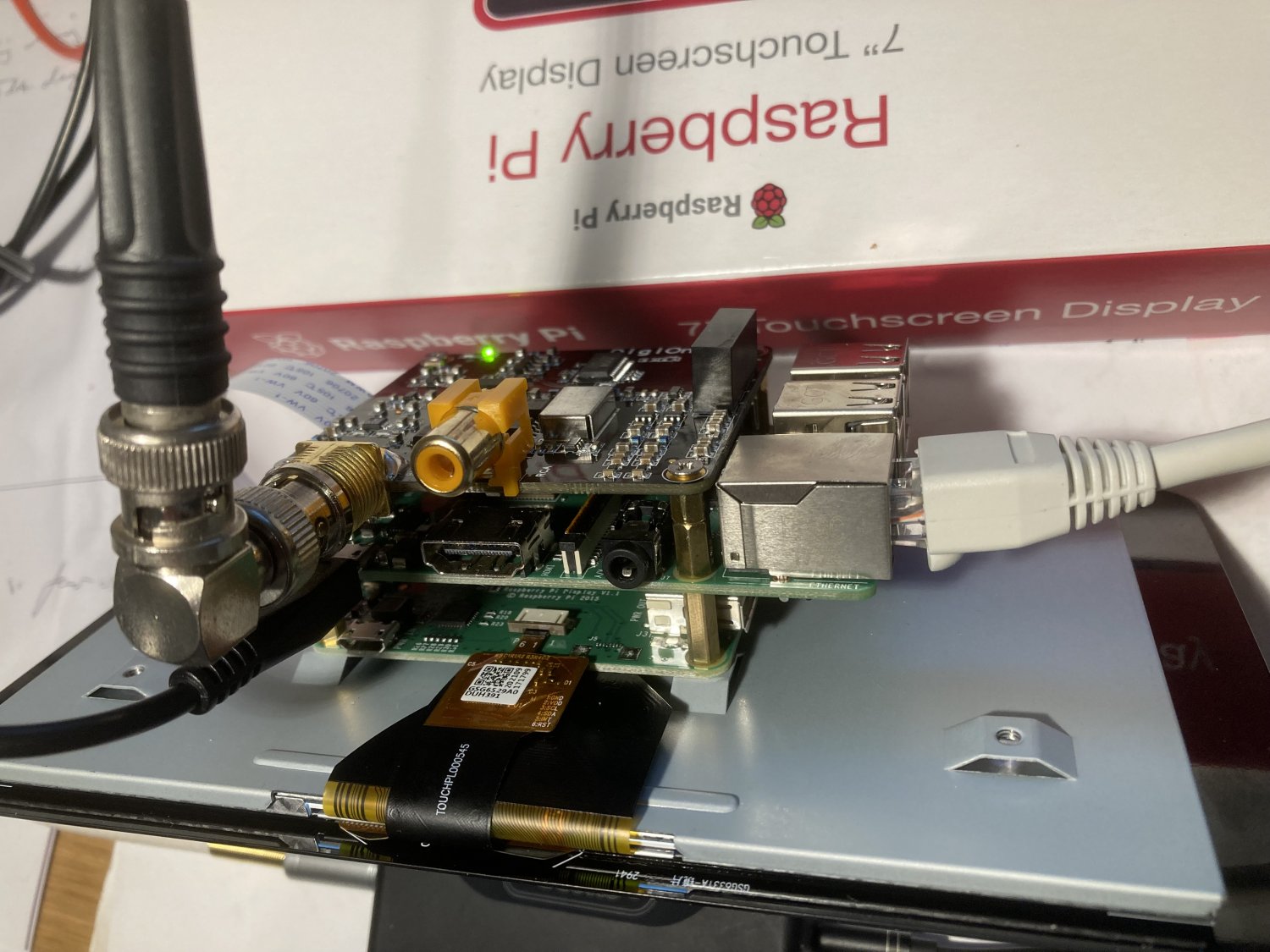 The usual RPi/Allo Digi guts behind the display.

The plan is to use this as a SPDIF digital out only device with the bnc output going to the back panel and the RCA digital out feeding the VU meters. I have ordered a cheap DAC to provide a line level signal to drive the VU meters and a mini QWERTY keyboard to hack to provide momentary push button inputs to the RPi for functions like, FF/Play/Stop/RW/Pause etc. The plan is to fit new microswitches to the cassette piano keys so that they can operate the Picoreplayer functions of the same description via the hacked USB keyboard.

However I am a 'bit at a loss' to know what to do with the 'Record Level' and 'Line level' Knobs and the 4 No. 'toggle switches' Any ideas?

I can use the keyboard hack to access up/down/left/right in the picore player, but the knobs have potentiometers attached, as you would expect for 70's electronics, I could modify them to operate a couple of micro switches for left/right/up/down 'etch-a-sketch' style, but its going to be quite a task and I really not sure what to do with them that might be worth while even then?

I have tried a USB mouse, but I am not able to get a reaction from Picore to this device. Do you know of any cheap USB devices that might allow me to tap into the rotary action of the knobs that i can use via the Picore player?

The touch screen and phone/tablet interface can do everything but, it would be nice to give most of the front controls a use, don't you think?

Build from new, less constraints.
Salvage what you can from the deck.
It will hamper your freedom.
•••

NareshBrd said:
Build from new, less constraints.
Salvage what you can from the deck.
It will hamper your freedom.
Click to expand...

I understand your logic and I agree, however this project stems from my wish to make something that looks and feels like 1970's HiFi.
Reactions: 1 user
•••
M

Adafruit has 5" display if the 7 is too tight. It is easier to add some plastic to fill the gap than to machine an aluminum front panel. You might be able to change the knobs into optical encoders to do something.
•••
N

It is easy to make in acrylic sheet, use pearl pigment paint for that shiny Aluminum look.

Thanks for the ideas, I may have to consider an alternative a
smaller screen and I like the ideas for trim, cheers
•••

You are not "re-purposing" the cassette deck by any means, just using its case/chassis.
•••

Agreed, but certainly not intended, if I could figure out how to edit the title I could change it to read, “Reusing a cassette deck chassis to house a digital audio streamer” although I will be using the power supply, VU meters, and VU amp circuitry, pianokeys and any controls I can link up.

if it had separate rec and play heads I might have been tempted to run the streamer output through the tape for the full experience, it would automatically make a recording of your listening session and it would auto stop at the end of the tape too!
Last edited: 2022-04-08 8:24 am
Reactions: 1 user
•••
F

Well HELLLOOOOO beautiful!
I'm way way way into this and the progress.
•••
F

Brilliant about using the digital out and then using the analog outs and a small amp to drive to the meters!
I too have struggled with wondering what to do with the idle controls and honestly have an idea you might like, but I have to think about it further to design a way to get it to work.
??? Use the knobs as some form of infrared control to control lighting in a room????
Reactions: 1 user
•••
F

I also want to clarify I mean lighting control for your room! Not for the device!

I’d honestly love to ask you questions about this if you would hit me up!
•••
M

I suppose you could make it a "tape recorder" by adding an ADC so you can record as well as playback. Then the input adjust controls could be used as designed. You could get super creative and make all the buttons do what they did on tape with the probable exception of the noise redux controls. You could use the screen for setting the file name to record to, although a blu-tooth keyboard would make it much easier to type in a file name. Way way way more work though.
•••

FreakinScreamer said:
I also want to clarify I mean lighting control for your room! Not for the device!

I’d honestly love to ask you questions about this if you would hit me up!
Click to expand...

I had a few suggestions, which included using the line level and Mic knobs to adjust the VU meter brightness, but in practice I run them at full brightness with new lamps!
•••

mikeAtx said:
I suppose you could make it a "tape recorder" by adding an ADC so you can record as well as playback. Then the input adjust controls could be used as designed. You could get super creative and make all the buttons do what they did on tape with the probable exception of the noise redux controls. You could use the screen for setting the file name to record to, although a blu-tooth keyboard would make it much easier to type in a file name. Way way way more work though.
Click to expand...

Yes I love this idea, run the audio through the tape mech for that true tape experience, plus you would get a recording of your listening sessions. And you would have to flip the tape every 30 to 45 mins. :0)
•••

I have just realized that I haven't posted what it looks like now.

Here it is for better or for worse, 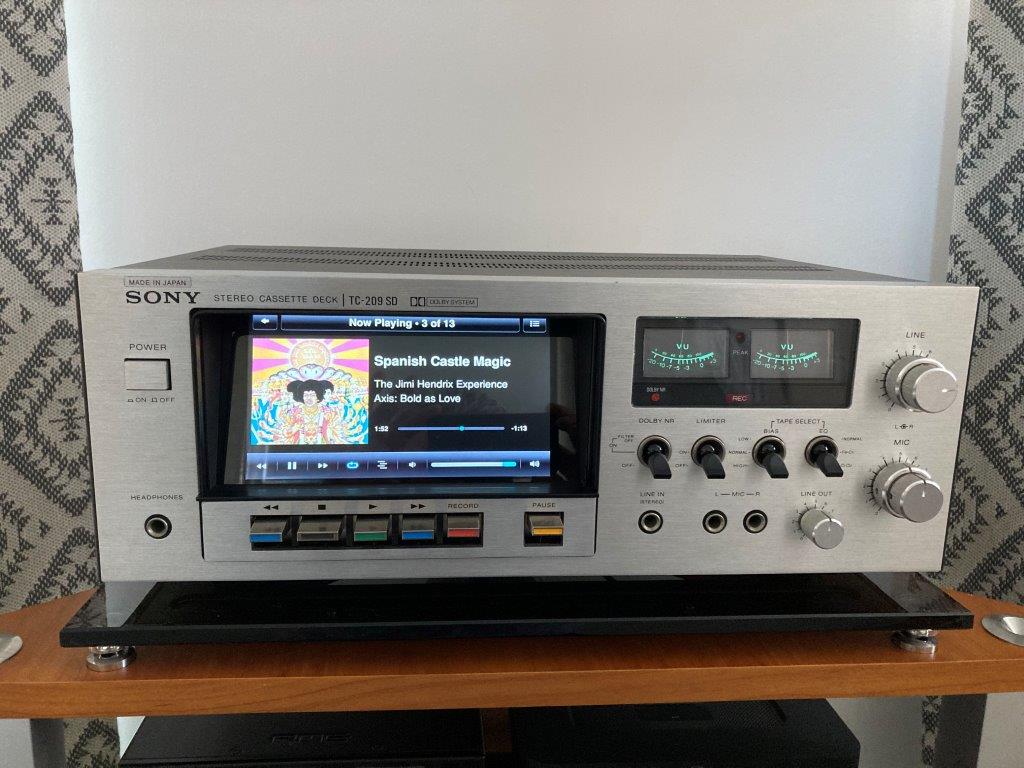 There are a few things I am still considering, including altering the screen placement, but at the moment the unit has pride of place on the top of my stereo rack and gets regular use by the family and I, so that is a first, an endorsement of something I made/put together!

After a few months of using the original VU meter driver section I decided to upgrade it to a modern driver circuit and the VU meters now operate with more consistently and it even allows for calibration. I have also chopped out the switching matrix linked to the cassette 'piano keys', which allowed me to define what the switches do in terms of instructing the Picoreplayer running on the RPi. These are now direct hard wired to the salvaged USB keyboard controller PCB with 'REW/Stop/Play/FF/Rec/& Pause' all more or less doing what they would have done when it was a cassette player, except for 'Rec' which initiates, 'skip to the next track'.

Roog said:
'skip to the next track'.
Click to expand...

Clever! This is a very cool project, thanks for posting it.
Reactions: 1 user
•••
M

Rotary encoders could be used for scrolling and selecting. Recent(ish) OEM car radios can be donors for controls like that.
Reactions: 1 user
•••
S

Solenoid control and flourescent VU meters would be easier to implement.
Looks good
•••

dangus said:
Rotary encoders could be used for scrolling and selecting. Recent(ish) OEM car radios can be donors for controls like that.
Click to expand...