Joined 2010
I'm thinking of getting a R2R but not sure what to do with it but they do look interesting in a system. I like those one with the big console. But there are no new pre-recorded tapes available or if available, they cost a fortune. Old tapes are a mess. Recording from FM tuner or LP doesn't make sense at all. I prefer to listen it first hand on the LP. What's give ???
•••
B

Joined 2010
The best use for a reel to reel machine is making live recording. But today's stuff is so much better that it's come down to using them for their retro cachet rather than performance.

Wow and flutter as well as noise have been the major annoyances, so a studio quality unit is preferred. They are big and kind of dominate the system but if you use it enough, that justifies it.

I have two reel machines now. The old mono Ampex studio unit that I only keep to play those old tapes. If I get off my butt and transfer them, there will be no further use for the machine. The Revox I grabbed for a bargain price and only want to sell it.
•••
C

Joined 2007
conradhoffman.com
I remember back when a big Crown deck was unobtainium, and a nice Revox, Tandberg or high end Sony was the thing to have. I even remember the very low priced Docorder or Dorkorder or whatever it was, that seemed to offer every feature of the high end stuff, but almost had to be junk. It seemed like most of the major manufacturers had a deck of one sort or another. Today I can't imagine why anyone would want one, other than nostalgia.

Joined 2007
nostalgia. Like vinyl only better looking (ducks for cover...) 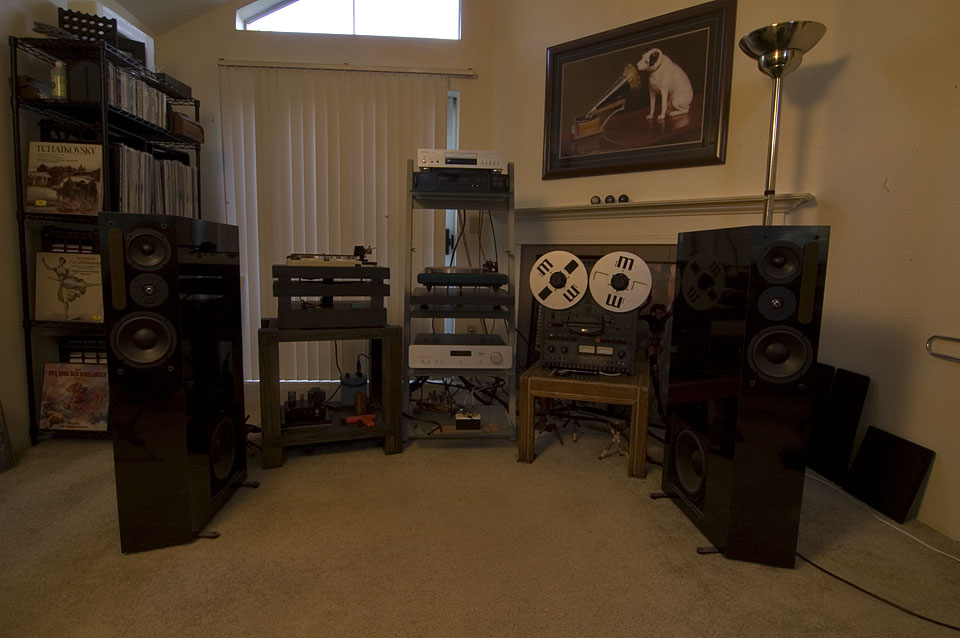 Depending on the unit, R2R decks that cost in the multiples of thousands back in their day can be picked up for substantially less now. Some brands and models demand higher prices than others. There isn't necessarily any logic behind the pricing. Figure prices from 2 figure on up into 5 figure pricing for a good used R2R deck.

I use my Otari MX-5050 B2-II deck seen in the photo above to play commercially recorded classical music. The deck will play back both 4-track and 2-track recordings. It will record, however, in 2-track. Call it a 1/2 track machine with the capability to play back 4 track. No auto-reverse, however.

I picked it up for around $450 a couple of years ago. A one owner machine that was pampered all its life and in excellent physical and cosmetic condition. You might be able to find a similar example for a lower price. When new this model would have sold for around $3k or thereabouts. It is a professional deck, not really intended for domestic consumer use. Just my cup of tea.

It's weakness is the on board electronics that is from the late seventies. A modern phono stage will outclass it. However, there are methods to remedy this by bypassing the internal electronics of the deck and running a lead from the playback head straight out to a new tube 'tape head preamp'. One such example is available from Bottlehead.
Seduction

So, how does this Otari playback compare to Lp playback of similar recordings within my listening room? Quite good. I can enjoy either Lp or tape with equal pleasure. I won't state which is superior, although many others have commented on this very issue.

Some links that discuss R2R:
http://www.tapeproject.com/smf/index.php?PHPSESSID=0elr4b2oap27vd2a7uokq3nvi4&

Tapeheads.Net: Where Analog Is Real

Joined 2010
Does the deck you want to get rid of play at 15 inches per second?

I love 1/4 inch reel to reel players. I guess for nostalgia but mainly because they sound great. If you have a good one and run the tape at 7 and 1/2 inches per second you will never notice the wow and flutter much. They are a pain in the butt but worth it for the sound quality.

Most aren't really 4 track or even two track machines though and 8 track tape players are not really 8 track. You could call one a 4 track because there is a left and a right and on the other side of the tape a left and a right but a real 4 track machine would allow you to do 3 overdubs after the main track. There are some actual 4 track machines but they call all of them 4 track that can play in either direction. Some reel to reels have a sound on sound feature and technically that could be called a 2 track if they actually worked but they don't. None of them do (that I have tried) and none of them ever have (that I have tried). You can do an overdub if you want to but when you play it back it will be out of sinc with the original track.

You can get new 1/4 inch (and all other size too) tape here...reel deal pro audio .::. keeping the analog alive
•••
Show hidden low quality content