Looking to try an open baffle design (preferably) with a full range driver. I was contemplating for some time about full ranges, as I've played with some old vintage non-expensive ones and I enjoyed the realism of the sound.

So, I was strongly considering the Visaton B200 but also Supravox 215 RTF 64 Bicone. Not sure why I got stuck with the idea that the speaker should be an 8 inch, but as a result I kind of ignored other smaller drivers.

So, what would be the best value per buck/your recommendation for a full range driver under 200 euro / piece? (any size) (as a side note, I don't want to invest in other drivers after that any time soon to help the lows and highs)

Based on history and reputation
SeasPrestige FA22RCZ H1597
It looks very promising at least. 6mm linear stroke and 14mm max could be usefull in open baffle where several other 8" fullrange drivers have a 0.5-1.0 mm linear stroke.
•••
M

DrBoar said:
Based on history and reputation
SeasPrestige FA22RCZ H1597
It looks very promising at least. 6mm linear stroke and 14mm max could be usefull in open baffle where several other 8" fullrange drivers have a 0.5-1.0 mm linear stroke.
Click to expand...

Looked at the Seas, looks interesting.. Doesn't the whizzer cone bring in more trouble than benefits, at least without equalization? The measurements look bumpy over 2kHz.

(That large foam surround looks a little strange as a choice for a full range for the Seas...but just my thought)

Go with a FAST (2 way with low 300Hz XO) OB and free yourself of beaming and distortion as full range is allowed to do what it does best: mids and highs.

Need a 15in woofer or two 12in for sufficient bass in OB. Bass drivers are not so picky - get cost effective higher sensitivity drivers with ample xmax. A favorite seems to be Eminence Alpha 15. I have had luck with dial 12in PA woofers as well for 100dB sensitivity.

Mid/tweet - the full range world of 3in to 5in drivers is your oyster. My suggestions are for two possible systems each with merits for certain application.

For high sensitivity and HF up to 15kHz go with PRV 5MR450-NDY (95dB). This driver has exceptionally low HD and sounds very clear. It has a breakup peak but that can be easily notched with EQ. I have used this in a 2 way OB and it is one of my favorite for its effortless headroom and vocal clarity.

My other recommendation is to immediately go with an active bi amp system. Get a miniDSP 2x4 and a pair of class D amps. If you have a class AB amp already great - use that for the woofer. Use a TPA3118 of 3116 or TDA7498 for the full range.

The cost of miniDSP and amps is less than passive XO components and is infintely adjustable and reusable. Plus it will allow you flexibility of EQ to dial in exactly the response you need.

It will have great probability of sounding great. Follow baffle dimensions of Manzanita OB if you don't have plans for your own OB design.
Last edited: 2016-04-05 1:54 pm
•••
N

12 Lta works. I paid £45 the pair via Pano who knew a DIY memeber who even measure my drivers free of charge ( will post if I can ). Dope the dust cap with PVA and make a phase plug. Mines a gloss paint roller 4 x 1 " held on a curtain track north south with black heat shrink to make it look OK. The roller 1/4 inch from the cone, close is no better. The tiny 3/16 wizzer edge pva painted. 3 damping foam 1/4 x 14 cubes to wizzer main cone interface looking like Mercades spokes. The speaker takes about a year to work. It always sounds 80% right from the word go with surprising dispersion. The has a 15 inch base to make piano music sound very real. I use what is like Alpha 15 also with 250 Hz choke to integrate them . It might be a 20 A 3.5 mH seeing 5R7, it's a mains choke in M6 metal that seemms OK . I use a DT74/8 in phase with 6 khz one pole filter. This helps give a broarder image without spoiling the holograraphic sound. +12 dB via Quad 33 @ 30 Hz and + 6 dB 10 kHz . Run flat they are OK. 4x2 half ply half MDF 1 " total. The 12 inch is centre and 15 inch in the space to the floor. Tweeter at 2 inches above the 12 inch, The prop is 2 x 2 fence post with hinge and gate hook ( 8 foot / 2 ). It's damped by a face flannel that was to see and not permenant. Post is 4 foot about 3/4 up the post. The baffle sits on two small rubber feet. 115 dB is seen on Apple app. The music very OK like that. I make sure I don't do that. Power handling is 300 W so it can go load. 40 Hz - 3 dB and 30 Hz I guess - 15 dB. They sound worth £3000. I have some Magnepans to say that, they are wonderful but do beam. The speakers will play any music and TV. I use very thin wire as I prefer it ( 0.6 mm OFC like DNM ). As a concert piano sounds real I do not want " better ". They do not boom or botom. I've even grown to like the look. No photo's as my bluetooth has failed. See if my son can do something when he gets out of bed.

All drivers in phase. DT 74 was choosen as it could work. Price was a bonus. 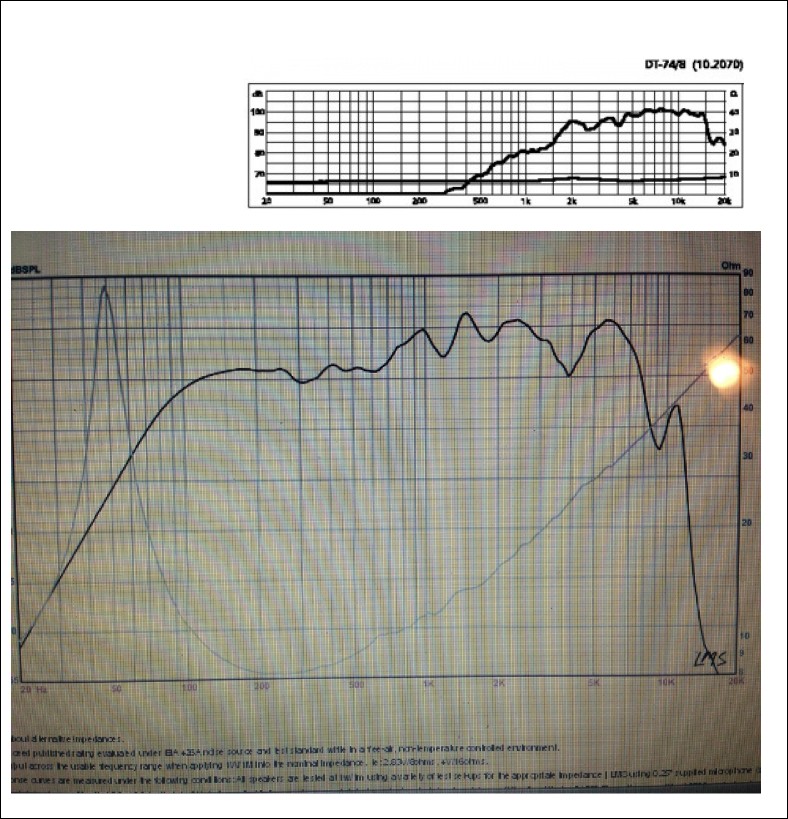 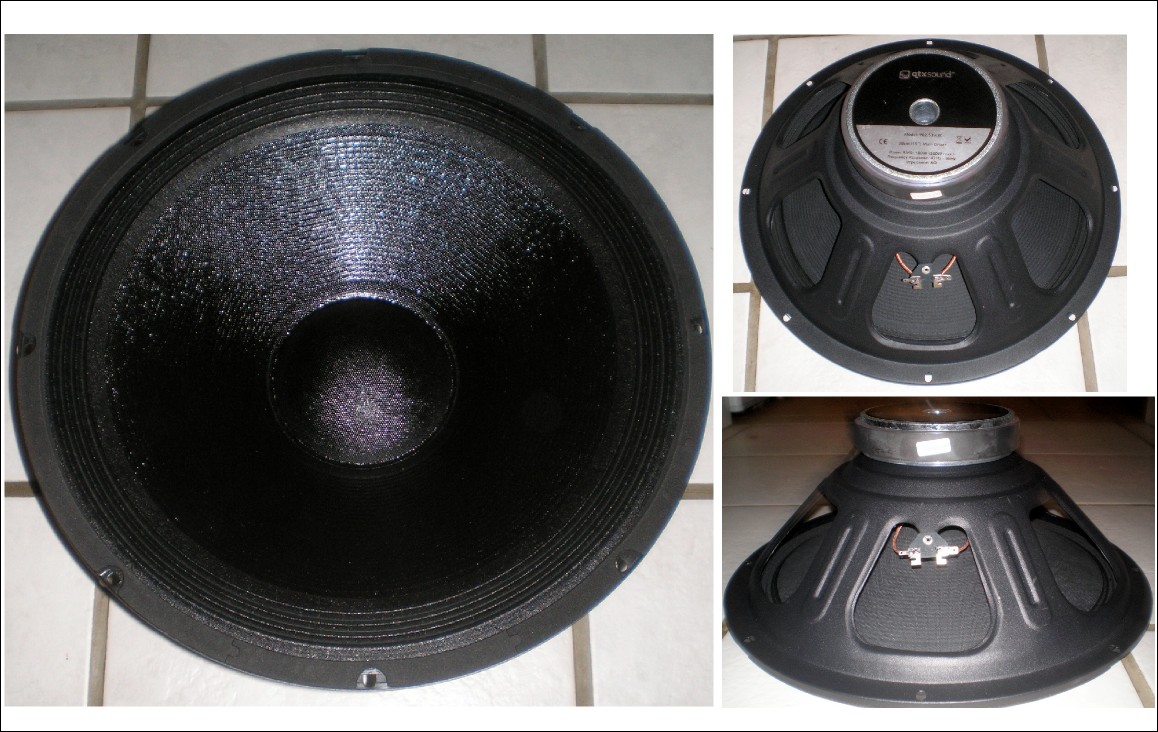 1.2 is perfect and like Allpha 15 of Parts Express. As these are 1950 style paper surrounds the don't mind EQ on OB. You will be hard pushed to see them move . ELP Nutrocker will do it and Dark side of the moon. Even so not much. 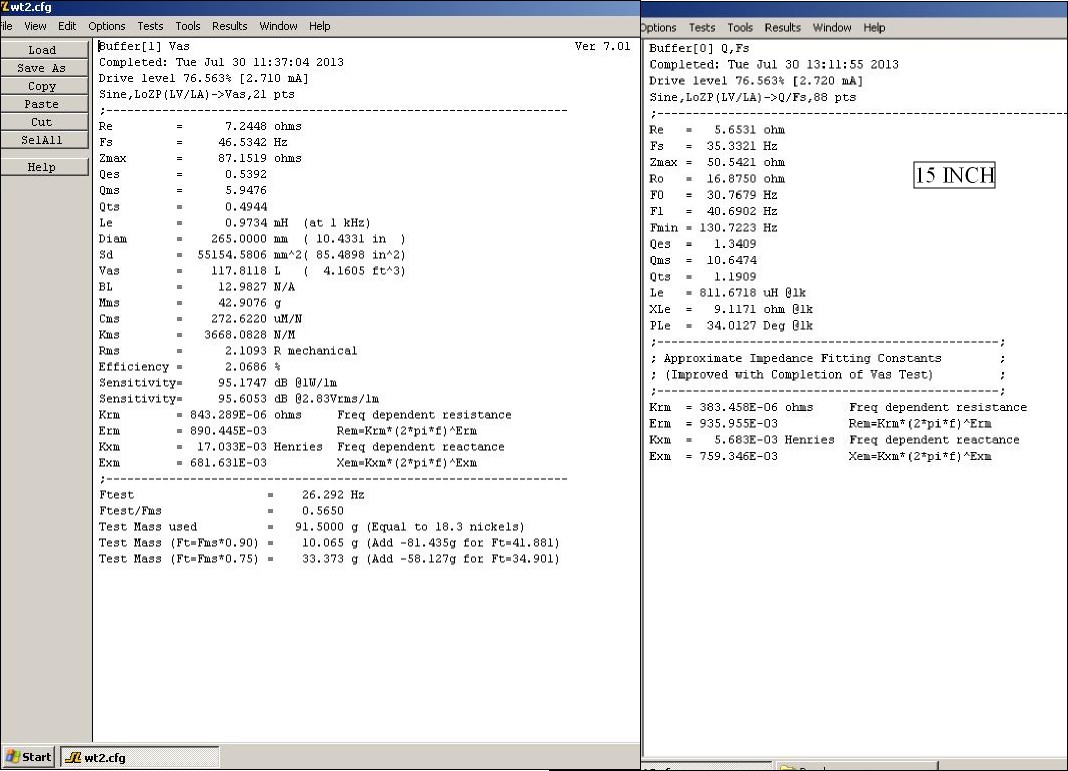 Will think on this... thanks guys! It's good to hear different opinions and experiences!
•••

Hi, the Seas Prestige FA22RCZ H1597 seems rather good, on chart.
If you fell the response is rather ugly in the upper octaves, since it's a fairly low sensitivity driver, you might add a cheap but good tweeter such the Dayton AMT mini-8 crossed at 7-10 kHz
•••

Meanwhile I continued reading a lot. As the listening room won't allow me to put large open baffles away from the walls I think I'm decided to go with a FAST. I'm thinking to go with Supravox 135 LB (and some 15" in the future)... good value for the money, high efficiency as I wanted and hard working nicely in the higher up frequencies. Need to think/find a working plan..
Until I get the 15"es I can also play with 135LB in an vented enclosure.

Still open to suggestions, though... Many thanks!
•••

The Fane seen on another thread seems good.
•••

Wow ! fane ! A famous hi-fi brand
That supravox has obscene response off axis
Seems to be rather good midrange indeed

When making a FAST the full range is fully supported by the baffle, while the helper woofer is not. So theoretically you need to subtract 6db from the efficiency of the woofer. In practice because of room gain 4db is about right.

Anyway, this is why you typically do need a 15" woofer to keep up with an efficient ~5" full range if using a passive crossover. You might be able to get away with a 12", but any smaller than that and you'd be better served with an active crossover IMO. Or use multiple smaller woofers.
•••
C

My specialty is not OBs (not that we haven't built a few). Few drivers will provide bass by themselves* on an OB so the typical solution is to use a midTweeter plus a big *** helper woofer, ie a FAST. The MJK passive baffle article is a must read for that. http://www.diyaudio.com/forums/full-range/108751-new-mjk-baffle-article.html

The Alpha 15 is a dirt cheap woofer that is suitable (at least here in North America) and the FF85wk a good choice (amoung many) for the midTweeter.

*(of the drivers we have tried the Visaton B200 (they really need phase plugs & the real world efficiency is 5-6dB less than the spec, also something like 2x your budget over here), the Betsy, and an unobtainium Korean 6.5" all worked -- amazing how much bass can be had if your baffle is 17' wide )

Well, exactly, I was thinking of a FAST (as xrk971 proposed). I could choose an enclosure that could provide interesting bass only with a single fullrange, but I don't want to feel later on that the lows are not as I wanted and buy a woofer and create another enclosure.

What I wanted for sure from the beginning were (at least) high sensitivity fullranges in an open baffle, for the airiness and the fast lively soundstage, especially in the midranges. If I had the space to position them freely, I would have chosen OB with my eyes closed. But because of the space and size restraint I want to find a compromise and try a FAST, with a single fullrange driver placed in the upper part open baffle and the lower part a woofer, placed sideway, vented or not, something 10-12" with similar sensitivity as the fullrange.
As you said, planet10, I was considering Visaton B200 but now, Supravox 135LB and some woofer... maybe Hi-Vi M12, Scanspeak 22W/4534G, Seas CA22RNX, Vifa PL26WR-09-08 or one of those good-priced high sensitivity paper cone Eminences. I've played with some BETAs and they were not bad at all.

Couldn't find an already made plan as most of the people try a 3way FAST or they have some small fullrange OBs with separate subwoofers, with no passive crossover.
•••
Show hidden low quality content