Joined 2004
A few months ago there was a thread about cheap Chinese 6P3 SE amps:

Another Newbie Who Bought a Cheap Chinese Tube Amp Kit

What I said in that thread:

So I ordered one last week. For about $115 shipped, it's not a bad deal. I'll be building it as a triode output with no global feedback and re-working most everything else as well. I'll document it in another thread, but for now, my initial impressions:
1. It's small. Real small. The length/width is about that of a sheet of paper.
2. The iron is close together. Like sharing the same mounting screws close together. I'm a bit worried about magnetic coupling, but we'll see.
3. The power transformer seems to be big enough, from initial mass estimates.
4. The sheetmetal is SHARP. I sliced open my thumb within the first minute of unboxing. Five minutes with a bastard file and some sandpaper and now it's only mildly dangerous.
5. The packaging was excellent for the price point. No bespoke foam liners (naturally), but lots of foam and thick cardboard around everything.
6. The components look to be quite value oriented. Most everything but the iron, chassis, hardware, sockets, tubes, and maybe the power switch will go into the "use, but not on something critical" spare parts bin. Most of the components I use will be from my massive parts stash.
7. The output transformers are small for SE. Maybe half the size of my Edcor 25w P-P transformers. So maybe 5w max in SE?

I’m planning on changing it from single ended pentode with gNFB to a single ended triode with no global feedback, among other changes.

Attached is a picture of the parts after unboxing: 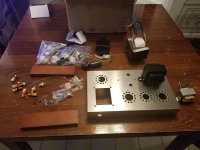 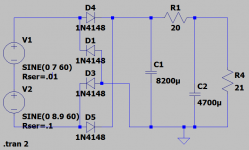 The first step was to insulate the screws that hold the transformer together with plastic washers and heat shrink tubing (thanks Wavebourne!) to pevent eddy currents and vibration.

Then mark out the wood sides with a sharpie and pre-drill the screw holes. Best to do this before there's no room to work inside the case. 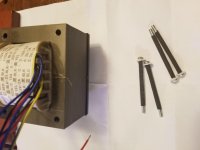 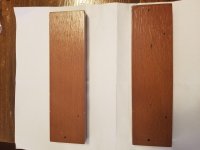 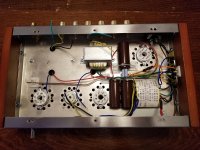 Here's the first test fit of components. The Ground connection is using a piece of 14ga ROMEX as a bus bar.

I also decided to use solid state rectification instead of the tube rectifier. Because the transformer is a 300-0-300 meant for half wave rectification, the rectifiers will see at least a 600v difference. My Schottky diodes are only good for 600v, so I doubled them in series to give some overhead. They're soldered to a piece of PCB for mechanical structure and mounted to the side by the transformer (the right side of the picture). 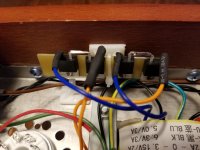 Joined 2006
wavebourn.com
If roughly stereo class A amp with 6L6 tubes would consume 120-140 mA of current, and 10% drop under the load would be around 40V, you get like 380V rectified, or about 375V on anodes, with voltage drops on a choke and output transformer primary. Minus cathode bias. If it is too much for 3K5 primary output transformers, then yes, the resistor for a power filter can be added and calculated. For 50V voltage drop and 140 mA current it should have 360 Ohm value. Power loss on it would be 7W, so 10-15W resistor would be fine.
•••
F

Joined 2004
The resistor in the CRCLC is primarily to reduce initial inrush and drop enough voltage to keep under 400v across the capacitors until the tubes warm up enough to conduct. The source follower in the driver stage at start up will have a load of about 16ma per channel until the tubes conduct, so hopefully this is enough load to keep the voltage down and the capacitors safe.
•••

Joined 2006
wavebourn.com
Such transformer with SS diodes and 470 uF first capacitor does not cause any inrush problems. "Keep under 400"? Calculate for yourself. Find online calculator for RC time constants. Voltage drop on 16 mA you can calculate using Ohm law.
"Hopefully" in electronics does not work, you can calculate everything.
•••

Joined 2003
Paid Member
Voltage at first filter cap goes to 421V, no-load (or light-load), and near that at full load.

I need 500r in the middle to get 350V output at an assumed load. Another assumption would give Anatoliy's 350r. Otherwise way up at 400V.