So I have a repair/refurbish of some original Quad II amplifiers.

One of them is in decent condition the other one is under transformer goo.....
A picture of the OPT 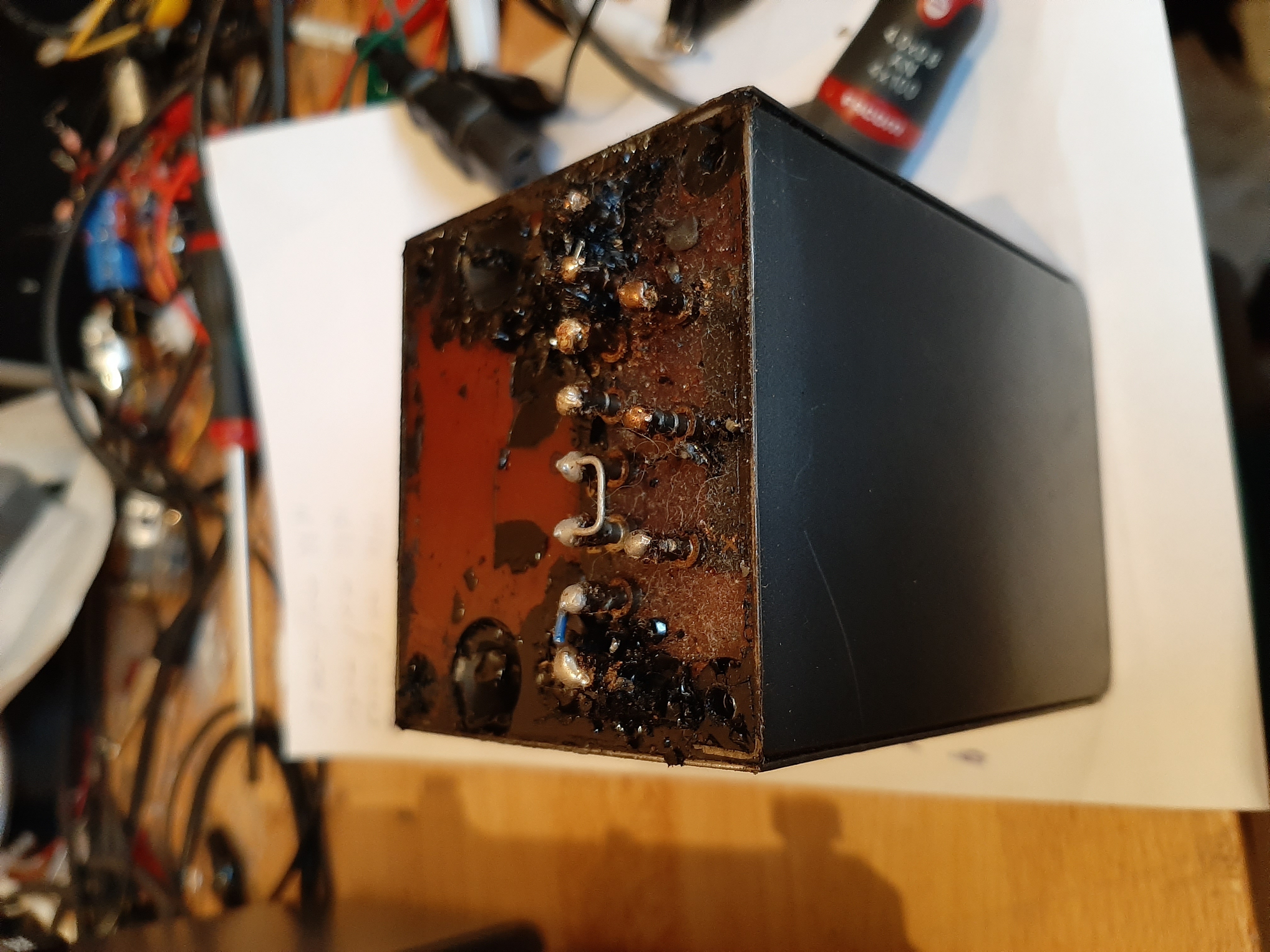 Power transformer is about the same. The inductor is better.
Measurement of DC resistance looks like they could still be good.
So I was thinking of getting alle the goo out (how would I do that? probably heating them...).
Or when I was reading it appears there is a company called majestic transformer who make complete replacements.
According to keith snook his website they should be better then the originals.
I also tought about using a lundahl that has CFB windings but then I also need to pot them etc.....

Anyone has experience with these replacements from majestic transformers?
When I would replace the opt's I would ofcourse replace them both.
Same goes for the power transformer.
The guy wants the amplifier in very good condition (= like new) so that is why I would take this route.
Al passive components will also be replaced.
For the tubes, they still hold the GZ32 rectifiers so these will go and a GZ34 wil fit in there.
As for the power capacitors, using the GZ34 I am replacing them with 47µF ones.
One of them still has the original GEC KT66 in them, the other one has 2 different kt66 brands in so was thinking about a new quad of them.
•••
A

I have a couple of QIIs that I've been taking my time refurbishing. Here's what I've learned:

GZ34 will run the B+ at a slightly higher level, meaning the KT66s will run hotter. The Quad IIs 'cheat' a bit on the spec sheets for the KT66s, which says that 1) the valves should be mounted at least 3.5" centre-to-centre apart, and 2) separate cathode bias resistors should be used. It should be OK, but this means you should definitely up the wattage rating on the cathode resistor, and make sure that the top of the amps are properly ventilated. A common mod that is made for reliability reasons is to install dedicated 220Ω resistors with parallel capacitors, replacing the common cathode resistor. The output valves are mounted in a recessed pocket, which should mean that they can draw air up through the chassis -- except that Quad didn't make any holes in the bottom to draw air in!

A common cause of 'goo' leakage in the transformers is that they get hot due to excessively leaky coupling capacitors, causing the output valves to draw more current through the OTs. AFAIK the potting material is tar, so you should be able to (carefully) use tar remover to clean them up. If they're not shorted you should definitely keep them around. People have also been able to get them rewound, which might be slightly cheaper than an outright new OT purchase. I haven't heard of anyone getting off-the-shelf transformers from another manufacturer -- not saying you can't, but it doesn't seem to be very common practice.

Pay attention to the voltage ratings on the resistors that you use to refurbish them, if you're going for new ones. I neglected to do this, but luckily it just so happened that the ones I used were OK in the positions that I used them in.
Last edited: 2020-01-24 4:53 pm
•••
V

Thanks for the info.

The cathode resistor is on the list as it is to low in wattage to begin with....
Seperate resistors for each tube crossed my mind but it's not like the original however I think it would get better specs.
Using the GZ34 the power goes up as well.

For the other resistors, when I build something with tubes I use at least 1W resistors that can handle around 500v just for a safety margin.... tubes get hot etc.... and there is place enough on the quad II board
For the coupling capacitors I have to see what to about the small capacitance that goes to earth on the original hunts capacitors.

The Russian K40Y-9 seem to be the best modern equivalent with a metal body. I got a couple from a guy at the Tonbridge Audiojumble (in the UK).

Measure the transformers carefully: they may still be good. I once had a Quad II that was in a fire: it looked terrible but it worked OK after some minor first aids. All that was required was a paint job.
•••
S

Let us know what new OPTs cost when you get the quote please.

I have old quad 11 that leaked goo due to being used in hot climates. The trafos were 'tropicalised' and it worked, but they have leaked just though general usage. Mine are 100% fine, no dodgy capacitors - all original still - just heat. If they measure OK then don't feel you can easily improve on them, at least within the original can's dimensions.

I wouldn't go down the GZ34 route for the reasons given above, the b+ rail behaviour was never a significant design flaw (that I heard of)? A couple of extra watts and stressed transformers doesn't sound too convincing as an exercise...
•••
E

Vintage Audio Projec said:
For the coupling capacitors I have to see what to about the small capacitance that goes to earth on the original hunts capacitors.
Click to expand...

Don't bother. They have a leakage capacitance to ground all right, but the claim that this is designed into the circuit is urban myth, even though Quad apparently subscribe to it themselves. Quad IIs that oscillate without it are unknown to science, and the 'solution' of shunting both EF86 plates to grids with 33pF doesn't begin to make sense.
•••

Let us know what new OPTs cost when you get the quote please.
Click to expand...

I had a quote from Majestic just before Xmas ...

I have one Quad II with an old style OPT (marked ABCDEFGHIJ) so I was considering new OPTs in order to have them matched. There are actually quite a few Quad IIs over here that were used by the Swedish Telephone company, that have line level OPTs. The ones I bought came from Sverige Radio, and they had been modded to have solid state rectification, and some other changes for working in racks.

Yes, if the potting is not too tricky, then for what is meant to be an improvement on the original, I think that is a very fair price.

It would be nice to take the potted ones, but I have noticed the Quads come in quite a few hues of grey anyway, so I'll try and repurpose my old ones.

Lots of good stuff about Quads on Patrick Turner's website, if you have not been there ...

I have gotten the prices from majestic transformers they are as follows:


I am gonna respray the chassis as wel. a search on the net gave the color as "rover gun metal".

Only thing I am still looking for is a replacement of some kind for the voltage selector terminal as it is cracked a little.
Anyone ideas for this?
The units are gonna be used with the original preamp so the connection to the preamp has to stay.
Altough mounting an IEC socket and add grounding would be nice I think
•••
S

This is intense MOD territory:

Turner Audio in OZ (now retired) has some intense mods for the Quad II and some other classic amps. (See link.) It's a lot to digest. I think Turner isn't all that impressed wit the original OPTs, or the Majestics for that matter. Interesting reading all the same.