A "Windows 10 friendly" PSUD 2.10 has been released today, the only significant change is the placement of the rectifiers.txt file. This has traditionally been installed in the Program Files area, however Windows 10 will raise a permissions error if you try and amend anything in those locations making edits impossible. Download link is Download

The file now sits in (typically!) C:\Users\my-login-name\AppData\Roaming\psud2\rectifiers.txt so it's possible to make edits as you wish.

Other changes incorporated were the changes in Beta builds 57-61 which were not on public release:

Other news #1: Work continues on PSUD3 but it's a ground up rewrite as the technology in PSUD2 is broken as designed. As a result, it's taking more time than I would have liked. On a positive note, all simulations are working and giving very accurate results so it's the user interface that now needs to be sorted out. More work will get done during the Christmas break and hopefully this will take it to a Beta early in the new year.

Other news #2: I'm also looking at the long overdue task of separating the rectifiers.txt file out into individual .rect files in XML format to make sharing and editing easier. This would be used with an analysis add-on to make it easier to add your own rectifiers. There's a possibility this would come out as a PSUD 2.11 as well as being in the new PSUD3.

That's it for now, please put any questions/feedback as a reply to the post, thanks!

Thank you! Works fine in the first few pokes. Slightly cleaner looking (on Win7) than the last release. PSUD is very much appreciated.
•••
V

Thank you very much for sharing your work!
•••

Duncan you are a trojan - top effort for progressing PSUD3 and keeping us updated.
•••

At the risk of seeming ungrateful (I'm not!), is there any chance you might release a version of PSUD for the Mac? I migrated and the loss of PSUD is one of the biggest detriments to that move.

That would be really nice, but he's probably got his hands full enough.
•••

and another one , for all years with TDSLP :

Hi Duncan ... downloaded it for the first time and took a quick look at it .. Looks interesting & helpful - thanks for making it available!

Just a follow up on this, I've looked at ways for providing a Mac development environment. I'm a big user of VirtualBox and I understand it's possible to simulate a Mac on this, however every piece of information I've seen says that this is against the Apple T's and C's unless VirtualBox is running on a Mac (i.e. you need the Mac hardware!)


So.... I have emptied out my life savings and splashed out on a new MacBook Pro. I'll have a fiddle around with this over the Christmas break and see if I can port some stuff over to it.


A word of warning - I am likely to be on the look out for some willing victims who can help me Beta test stuff before it goes out on the streets. Probably half a dozen people or so.

The MacBook is being delivered today, more news in around 7-10 days time when I've had a chance to take a tour of it and learn something totally new.

Thrilling news -- thanks for the investment of time and money! I'm an unsophisticated designer but would be happy to serve as a beta tester if you're interested.

Thanks for the support.

I did a test compile last night (after familiarising myself with the slightly different world of the Mac), and the news is positive. I got a simulation to run, but the screen looks ugly and there are loads of things in the background that don't work properly.

Hopefully have something fit for public consumption in a couple of weeks. 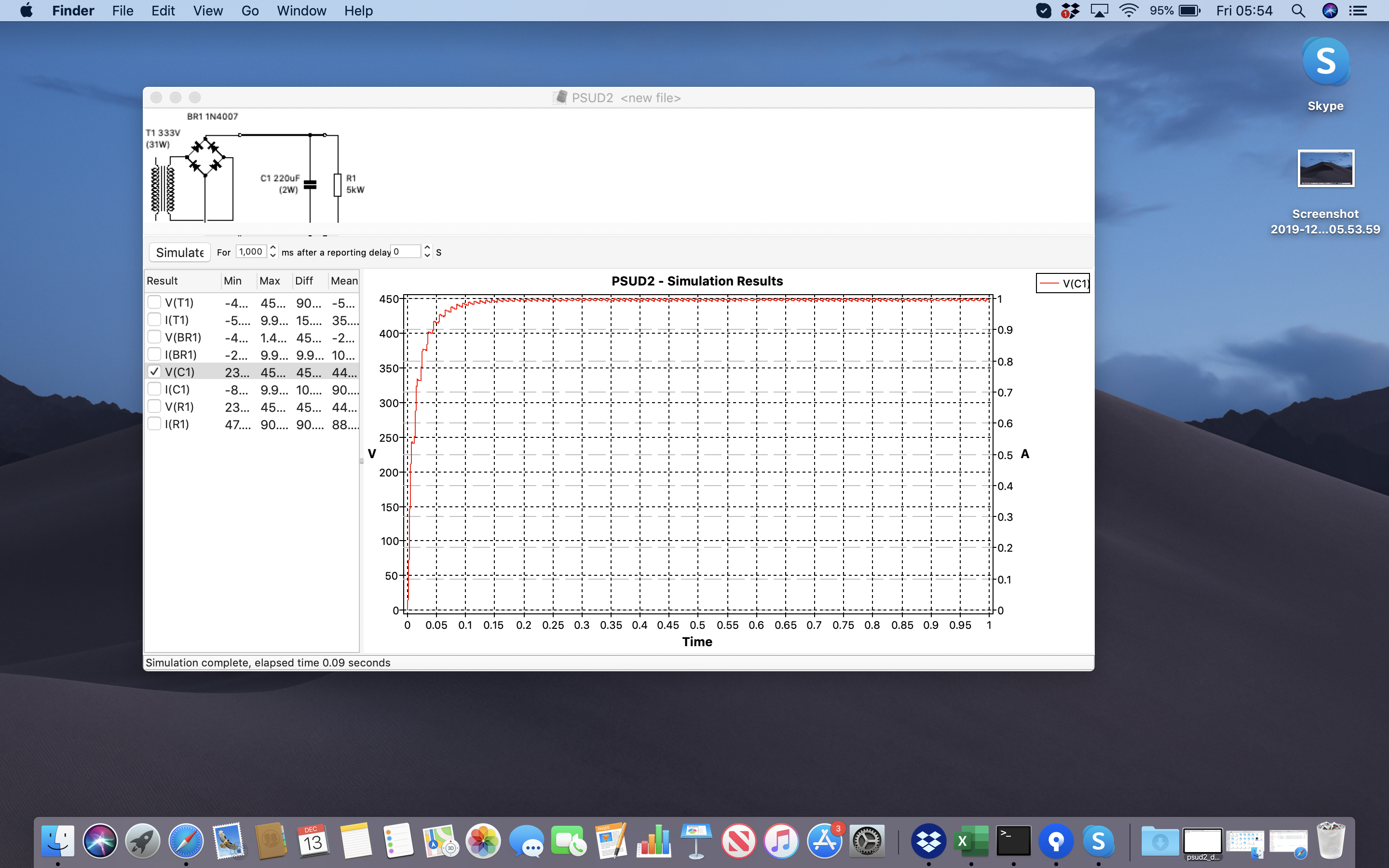 At the risk of seeming ungrateful (I'm not!), is there any chance you might release a version of PSUD for the Mac? I migrated and the loss of PSUD is one of the biggest detriments to that move.

Unfortunately, when I try to run the program, a psud2 error window pops up indicating "Invalid filename". There's an option to ignore the error and selecting that results in another psud2 error window saying "Access violation". Anyone else having this problem and know how to get around it?

Does anyone know where to find a copy of the previous version so I can use that while trying to fix the problem with the recent release?

Any updates on the Mac version of PSUD2?

What exact build of PSDU (if you can get to the Help box)?

Since it is causing filesystem complaints: What Operating System??

What folder is the EXE installed into? (example: C:\Program Files (x86)\PSU Designer II ) Are you running with administrator powers?
•••
Q

PRR, your questions were very helpful, thank you.