Been interested in building a pair of full range speakers. And the 10" full range driver by PRV. That Parts Express sells caught my eye.

Anyone used these drivers before? Or have suggestions for a first build using full range drivers?

Which model are you referring to? Only see 10in mid bass from PRV - not full range.

If you want a full range from PRV, I have used the 5MR450NDY. There is a good thread on that here:

For first build with full range drivers, I would suggest a 0.40x scale Karlsonator with either a 3FE25 or TC9FD. If you want more bass, try 0.53x with dual 3FE26-16 in parallel or dual TC9FD in parallel. Both are wonderful sounding. The little 0.40x scale with a single driver is very high bang for the buck, and easy to make. Make it out of foamcore board if this is your first full range project. No tools or sawdust. Cheap and sounds great.

Edit: just saw that you updated post with model number - 10FR300PR. This is a new one to me. Super high sensitivity but with a dramatic rising response and peak at 10kHz. This would lend itself well to a front loaded horn to balance that out. But without a horn, that 113dB (at 2.83v) peak will need a shelving filter or it will rip your ears off with shout when played loud. xrk971 said:
Edit: just saw that you updated post with model number - 10FR300PR. But without a horn, that 113dB (at 2.83v) peak will need a shelving filter or it will rip your ears off with shout when played loud.
Click to expand...

Guess one could listen ~50 deg off axis.

tomtt said:
These are quite interesting ......
Click to expand...

Same thing I was thinking.
•••

Did some cab sims awhile back and the recommended reflex is a ~39 Hz max flat alignment, though due to having a bit too weak a motor [high Qts] needs some stuffing to smooth it out plus needs to be at least up against a good/solid wall to reach 105 dB peaks/8 W down low [no BSC required], so converted it into a MLTL to get some added vent damping, driver up to ear height.

Doesn't really increase peak performance other than much less damping, shorter vent required, so less likely to sound 'muffled' IME. All in all, should be a pretty decent performer for most folks, music genres and the price is right too.

As for the top end, that's what EQ and/or whizzer tweaking is for and recommend doing at least the $0.98 Lowther tweak: Modifications

I'm very interested to learn more about what peoples' experiences are with this driver. A friend of mine is interested in 'big but low cost' sound for a big indoor equestrian riding arena, and I've been kicking around the idea in my mind of mounting one of these in the middle of a 4x8 sheet of plywood, oriented long side horizontal (aiming to get rid of baffle step), with a sonotube well-braced off the back to get to the 4.30 cu ft that Parts Express says will give a lower f3 of 38hz.
•••

Only know what the published specs tell me below its ~180 Hz upper mass corner and that a rectangular baffle's BSC point will be somewhere between its two sides, so will need [2] 4x8 shts. just to get it down to a ~90.5 Hz/F3, plenty good enough for PA.

FWIW had one stuffed into a little "K10" size scaled Karlson for a couple of years but not done much - -maybe I'll measure it with port open then blocked. although "throaty" from the small K, I don't remember it sounding as shrill as my AN10 in a reflex.

This PRV and assume the MISCO 6x9 should be fun.

Here's a bit more on 10FR300 in a 42 liter sealed box with 450uF series cap, I don't know how a real
world electolytic cap with some film bypass would perform vs this sim. Its a nice size box and DC should not fry things. 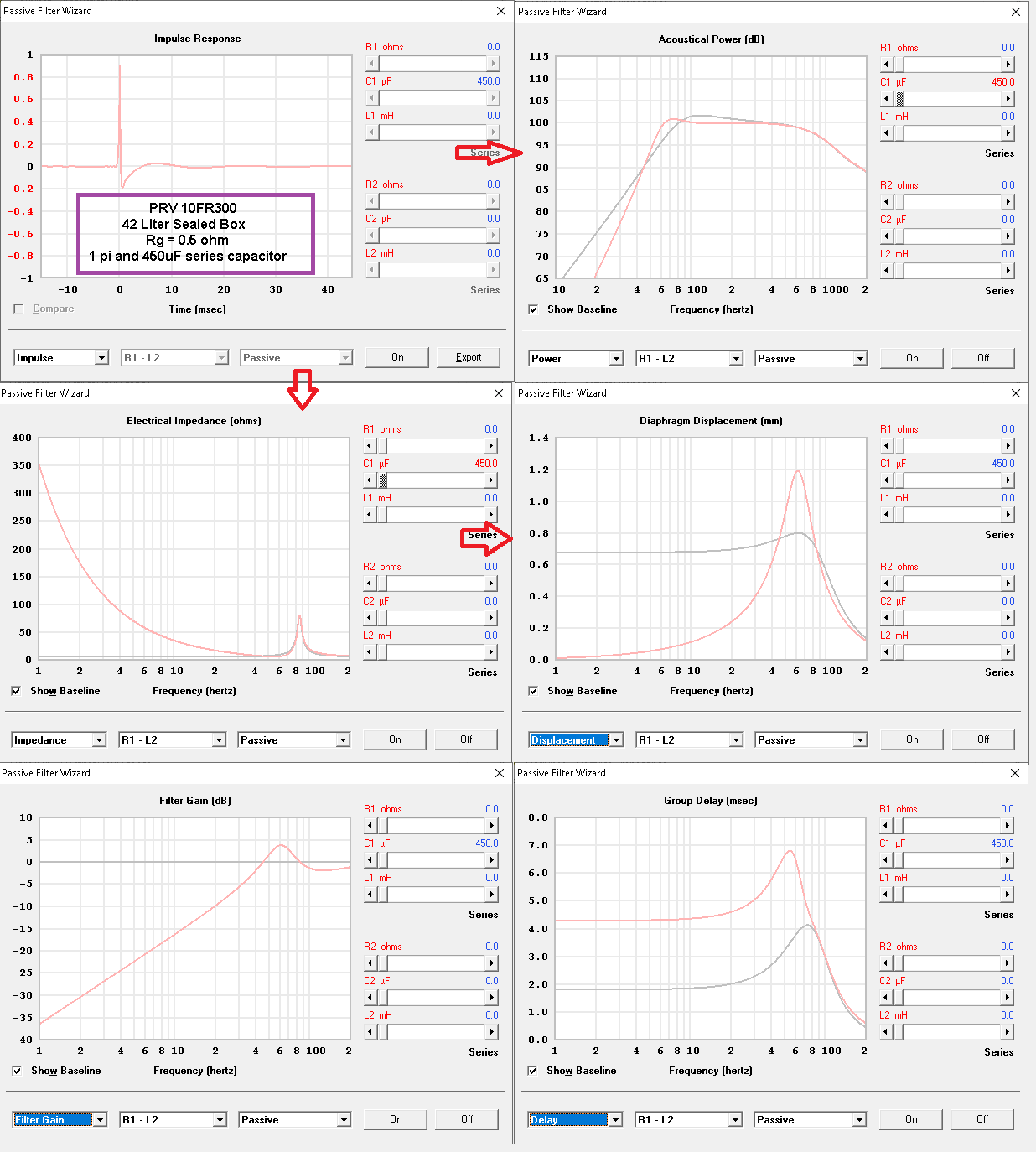 some fill and I think the 42 liter closed box with 450uF sim looks pretty good. Make it out of well braced 12mm or 15mm Baltic birch. 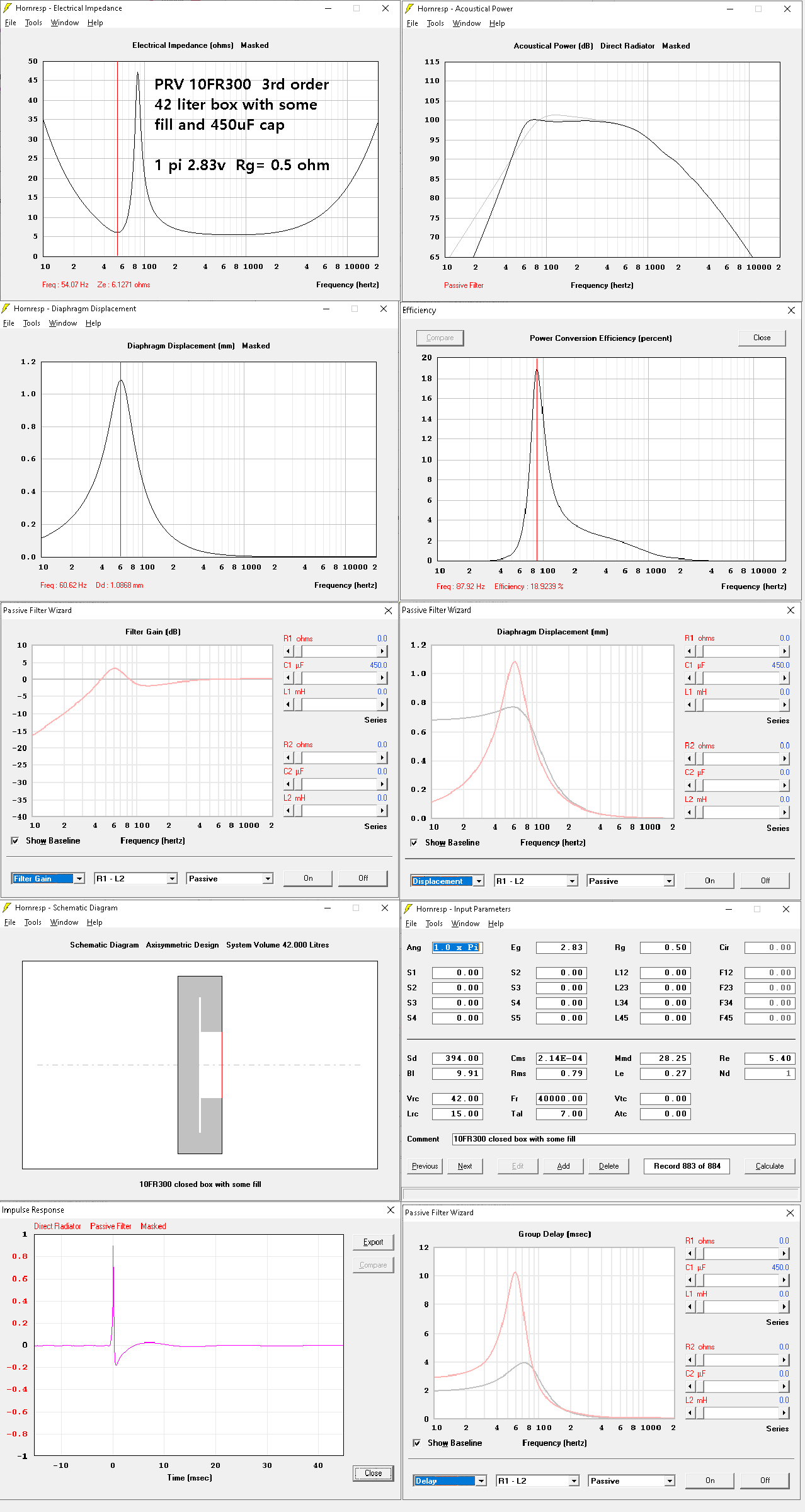 and without a cap, maybe a dual chamber sealed box like the old SEAS/Dynaco A35 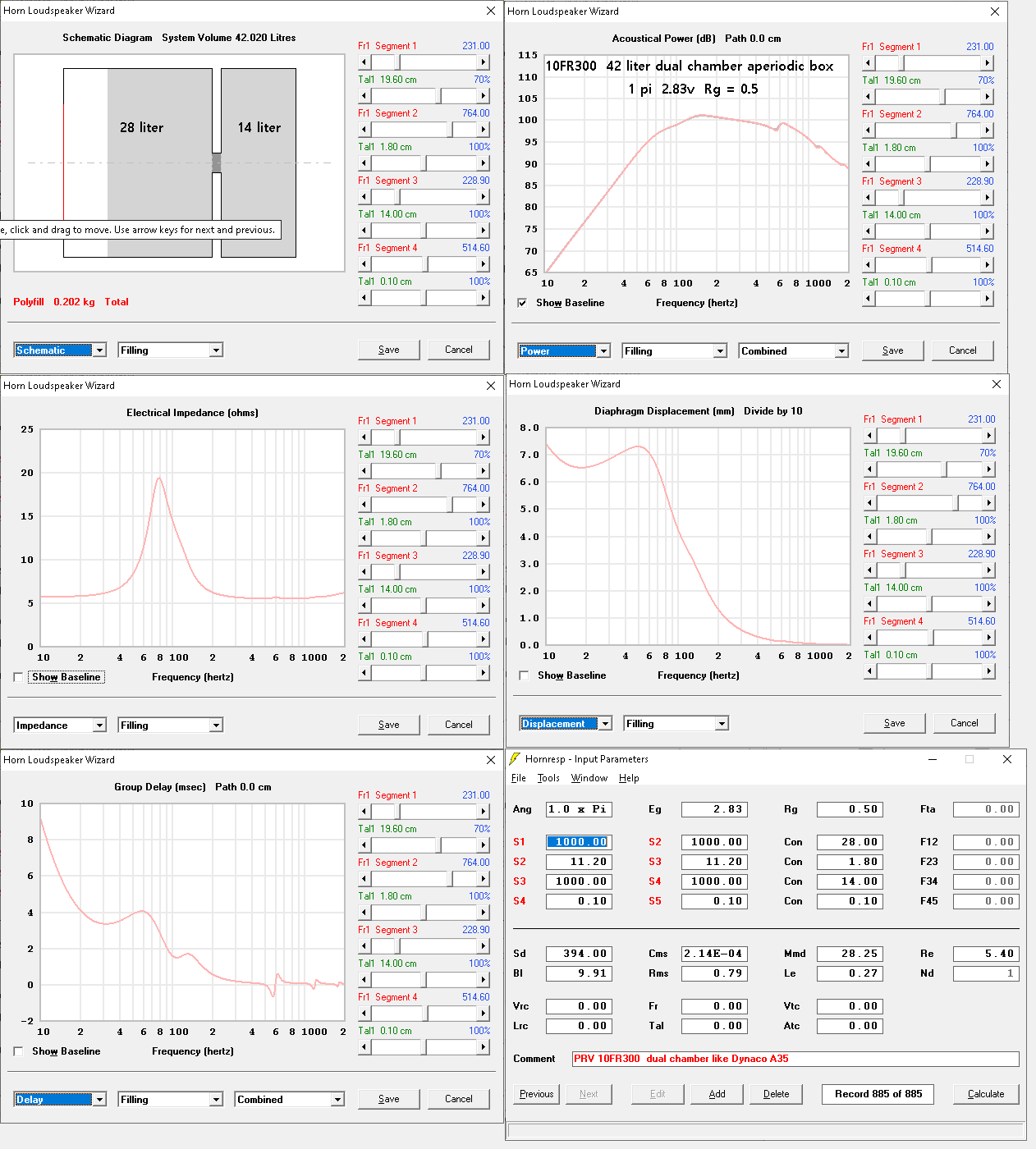 my 2003 Dell (and myself) are about kaput. Here's a few simple on and dead on axis traces of 10FR300 in an ~0.62 scale Karlson with about 1 cubic back chamber and the cabinet sitting ~37" off the floor and some distance from sidewalls. It probably would make a better looking graph using REW but I'm not well and don't remember the settings as only tried REW a couple of times.

From this perspective, there's no low frequency peaking. You can see reducing port size down to maybe 4 or 5 square inches opening at the top of the port made it leaner - but also created a deeper response hole It probably would sound decent in Karlson's K12 - or some Karlsonator.

Rg may have been as high as 1 ohm . Sorry for no real pic of it in the cabinet
but its the cabinet shown on the graph. 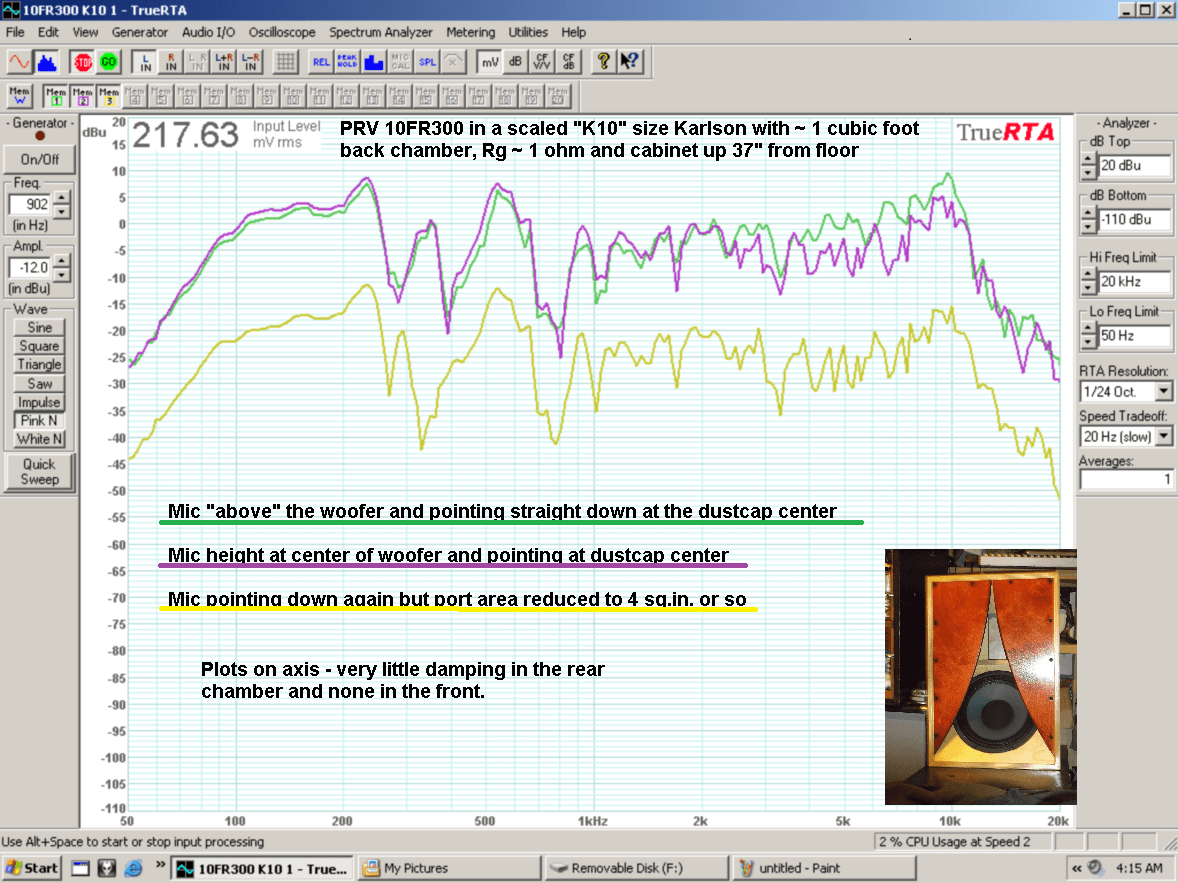 AH - here's an old graph of the first type commercial K12 (1954) using REW with Eminence and Dayton 12 -
so will try to see how REW interprets this PRV in the scaled K. BTW, in the January 1954 issue of Radio and Television
News, John Karlson warned about directly scaling down to a 12 size. I think that is probably case dependent. Karlson
to my limited knowledge never used a front shelf in the smaller couplers. It probably was employed in Karlson's K18.

Here's how REW views my 0.62 scale K15 with PRV's 10FR300 with mic height about the center of the speaker. That's below the central HF beaming lobe so the rise around 9KHz-10KHz doesn't show much. I'll have to look at this cabinet to see if can remove more of the front shelf.

The cabinet was elevated ~33" or so from the floor. If the mic had been higher then the top end would
have shown stronger both on and off axis. 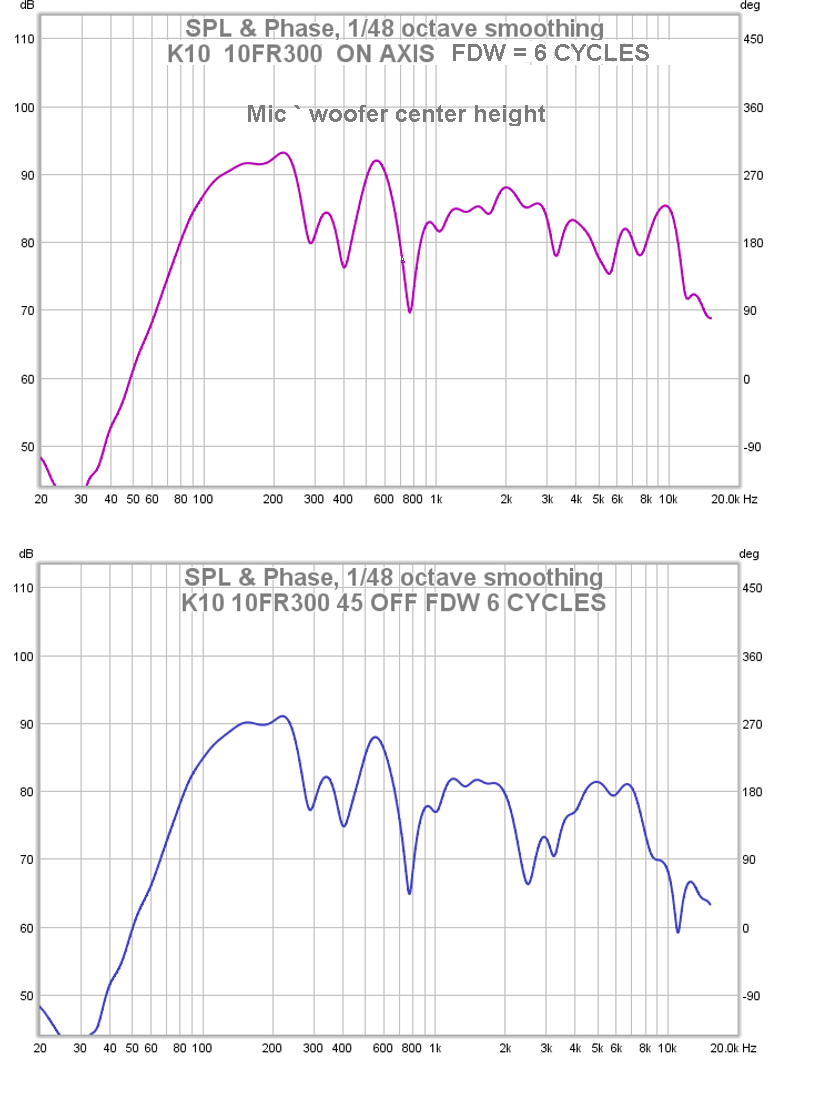 Can someone recommend a simple series inductor value to help flatten the rising response of the PRV 10FR300PR--so the driver can be assessed as a balanced full ranger? Or more complex circuit for OB use?
•••
T

Good question. I'm not the one to answer it as I have a very basic understanding of all the factors involved. Looks like using a .85 mh inductor would start the roll off around 1500 hz, then it would become less effective as the impedance rises with frequency, but maybe not enough? Would you need a resistor in parallel with the inductor?
•••

as a direct radiator (vs mine in a Karlson coupled cavity box) it would probably make sense to approach the rise with a regular baffle step filter - perhaps use one leg of an L-pad as adjustable resistor in parallel with the inductor and adjust that resistance to taste or measurements for the best overall subjective balance - then replace the L-pad with a fixed resistor.
•••

TicoLizard said:
Good question. I'm not the one to answer it as I have a very basic understanding of all the factors involved. Looks like using a .85 mh inductor would start the roll off around 1500 hz, then it would become less effective as the impedance rises with frequency, but maybe not enough? Would you need a resistor in parallel with the inductor?
Click to expand...

Hmm, with a 0.27 mH [Le], there's no impedance rise to speak of and with a ROT calculated transition to TL mode BW of ~754 Hz combined with huge whizzer, this rise is all the whizzer and its 'hot spot' attachment, so as I originally suggested, using acoustic solutions to acoustic problems would be best overall; otherwise a 1st order XO around ~754 Hz* is a good place to start electrically for on axis listening or treat it as a frequency contour shaping filter [RLC] as Freddy recommended to fine tune it.