As I would like to fit a tube-based PSU, excessive playing with Duncanamps' PSUD led to the following, showing only the supply for one channel each:

Will this work or do I forget something important?

Second question: Planning to buy only one (custom-wound, expensive) power transformer with twice the current capability and drive the supplies for both channels from the same transformer winding - bad idea?

A first version with EZ81 simulated fine in PSUD, but cross-checking with the datasheet showed my plans to be far out of SOA...

Thanks for your ideas and comments,
Andreas
•••

Your GZ34 version should work and it will probably sound better than Solid State rectifier. You can make it with just one choke, LC filter.

The power transformer having a rating of twice the actual current consumption is an excellent idea, though expansive.

Having a separate power transformer and regulator for each channel will give you what is called "dual mono". It's the best approach, though quite expansive.
•••

A single LC filter combination required uncomfortably large L,C values or resulted in higher hum than the original supply - at least that was what the simulation said.

Indeed, measuring is better than simulation, while listening is even better than measuring. It is best to decide about the final filter configuration by listening to the amp it will supply. Most other considerations can be made without listening.
•••

P.S.,
It would be a good idea to supply the driver tube (ECC88) with a shunt regulator (instead of the 4K7 resistor), either Allen's or Salas' shunt regulator. In such a case, a little more ripple on the B+ supply for only the OP tubes will not matter too much.
•••

For a PP amp, you will probably be happy even with a much smaller inductance choke, preferably low DCR.

Use PSUD to simulate also the step response, say change load from 100 to 150mA after a few seconds.

I am a little sceptical to the choke input (first LC). It may be difficult to get right.

I found the time to simulate the power supply step response today, here are the results: 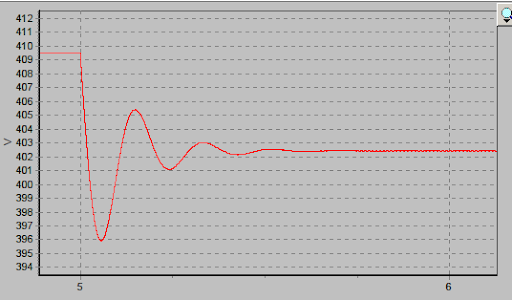 A load change from 110mA to 150mA causes the output voltage oscillation shown, the data evaluate to a frequency of 5,5Hz and a decay time of about 0,5s. 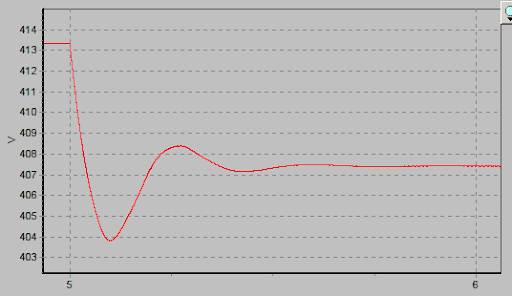 This one oscillates at 3Hz for about 0,5s as well after a step load change.

When playing around with PSUD, I found a few "stable" configurations which did not oscillate at load changes, but they involved large capacitances after the rectifier - not exactly what one wants with tube rectification.

As the circuit is Class A and will have a quite constant current draw, I am not going to worry much about the simulation results - especially as the original supply exhibits the same behaviour...

EDIT: A dummy load is absolutely necessary for measurements with tube rectifier and choke filtering - The german surplus electronics distributor Pollin (www.pollin.de) currently has DALE high power resistors (up to 50Watts) for sale quite cheap - I will get some of them and mount them on a heatsink...
Last edited: 2010-12-16 7:17 pm
•••
Show hidden low quality content
You must log in or register to reply here.
Share:
Facebook Twitter Reddit Pinterest Tumblr WhatsApp Email Share Link
Top Bottom