In this thread i would like to invite the customers who purchased amplifiers, SMPS modules and other boards from Connexelectronic to post pictures with their realizations. Since most of the customers remember to return or to leave a feedback only when something goes wrong or they have a problem, i will encourage them to post by offering discounts at their next purchase from 5% to 15% depending on the aspect, functionality, and results achieved. Please do not post any other comments than those regarding to the project itself.
•••
G

I exchanged in my power amp with two Hypex UCD400HG modules the two 1KW toroid transformers and the New Class D PSU with split foil caps to two SMPS500R.
What is the difference, in my opinion not so much. Maybe the bass has a little bit more pressure but it is only a feeling.
For the rest everything is the same like before.
For that reason the SMPS500R stays in. These things are absolute quiet and the best of all they save energy without any compromise in sound quality.
Christian a perfect job and also absolute high quality boards.
I will only use this kind of PSU in the future for my projects.

Hi Cristi,
Am very happy to find your TA0105 board to replace my damaged TA0104 amp and I was able to use the power supply and casing. The sound is very clean and totally grain free. Now thinking of getting another board and a couple of speaker protection modules to get rid of the turn on clicks and pops!

Am very happy to find Connex's Ta0105 ARB to replace my damaged Ta0104 amp. The sound quality is very good and is characterised as clean , clear and powerful sounding. Even for someone like me who is a noob when it comes to electronics, the installation was a breeze as my previous amp has a matching power supply. - Highly recommended!

Hi Everyone,
It's been so long since I have had time to come on here in the Tripath arena and look around.
I have noticed some questions re Connexelectronic and noticed some people are on the fence and others are making decisions based on pictures and third part hearsay.
As for some history I am a professional audio engineer, I have been known to design, build, repair, record, produce and pretty much live in recording studios from back when we had giant machines with two inch magnetic tape and tubes. Don't laugh as many of you may know some of the best sounds came from these analog chains!
A couple years ago I was designing a mobile unit and needed some high power that was efficient. When performing field tracking sessions one would need not be concerned about the various venues having enough amperage to drive a rack of class A or Class A/B amplification, along with computers, tube mic's, class A preamp channels 192 A/Ds etc... After hearing one of those cheap low powered plastic Tripath 2020's if memory serves, we were blown away.
Up until then I had personally relegated class D to either only low low frequencies or as ear killers for some kids pimped out ride.
Around this time Tripath had been dissolved and there was nothing high power class T available off the shelf to shove in a rack. There were a few companies making kits from what basically looked like clones of the original Tripath evaluation boards. While one of these kit companies actually seemed to have an idea of what they were doing, by that I mean using proper thickness cladding, grounding etc. this level of care only seemed relegated to their top priced offerings.
Via reading through tons of posts I came upon Connexelectronic as they are a very quiet company for some reason. For less that the price of a kit where we would spend many more hours/days soldering a bunch of tiny surface mount components... I still like through hole as among other things my eyes are not what they used to be... we ordered our first boards from Connex. Truthfully I was a bit skeptical due to the prices and country of origin. Upon arrival I was pleasantly surprised by the level of care that went into the fabrication of these units, high quality components throughout, extremely pristine soldering and even easily decipherable schematics. What ended up seemingly another audio chore turned into a pleasant undertaking as I was able to use my own quality cabling and interconnects rather than what would have been provided in a retail fully assembled unit. In my opinion these parts do make a difference...
Since then we have trusted Connexelectronic to supply over ten thousand watts worth of Tripath boards and supplies, yes we are RMS freaks, and we have developed a wonderful rapport with the owner. Cristi has always been excellent in responding to the sometimes quirky nature of our requests, our high expectations of design and of course our ultimate requirement for expeditious response regarding technical issues.
The few issues we have encountered were due to operator error rather than design or build flaws. These amps are very fast and powerful and can reproduce dynamics in live situations that require one take hf driver protection to heart. Also being a chip amp they are not as robust as discrete components and one should always take relevant precautions such as shutting off power prior to connecting/ disconnecting these into/out of the signal chain. In other words simply never make changes while powered up with signal on the inputs or outputs and it's all good.
The picture of our first 3020 Tripath thousand watt amp going through layout iterations and our other picture of the latest 3020 revisions prior to being loaded into chassis.

The easiest installation I've ever had in a powered speaker cabinet. My electric guitar goes through an external preamp/effects unit (Line 6 PODxt)
and directly into Cristi's TA3020v4. Best tone I've ever had and completely reliable thus far. Other band members couldn't believe the sound.
They were knocked out!

My ConnexElectronics TA3020v1 is still going strong. It's been used daily for over 2 years now.

Here's mine. Unlike some of the lovely cases here I've gone the "found object" route for my enclosure... though as the found object is a scrapped power supply case for a bit of medical gear with a hospital grade EMI mains filter it's worked out OK: 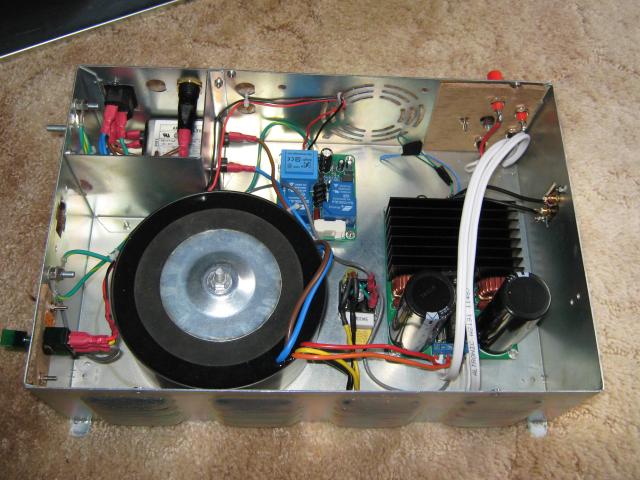 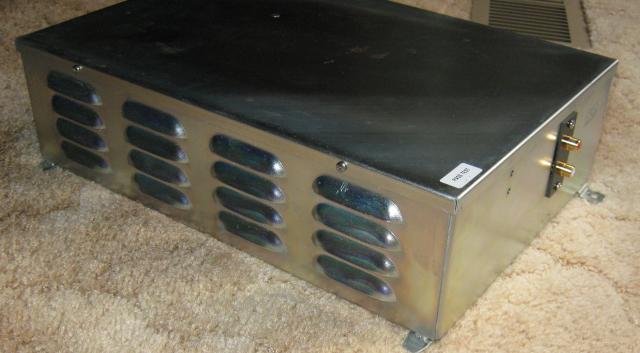 I can also see a miniDSP in there I think?
looks great!
•••
S

zog666 said:
I can also see a miniDSP in there I think?
looks great!
Click to expand...

Here is my first class D amplifier made with following Connexelectronic modules:
2 x IRS2092 Modular Amplifiers – 600W 4Ω. each and around 900W 8Ω in BTL mode.
1 x Balanced Input Phase Shifter – to select symmetric / asymmetric and stereo / BTL modes
1 x SMPS2000R power supply. ± 80V 2000W.
I received these modules completed and tested. I simply mounted them in a 2U chassis, added some wires, 2 fans and few components...
The result is a very stable and nice sounding amplifier in stereo mode as well as in "bridged" (BTL) mode. It sounds GREAT, with powerful and strong bass, while keeping details of medium and high frequencies and without any white noise, hiss or 50Hz noise.
When I compare with a Class AB power amp, I cannot say which is better than the other.
I regret having received the modules without any documentation and specifications. Fortunately, the silkscreen printing on PCB allow do without.
Very well designed modules, with excellent construction quality and good value for money. Highly recommended!

This is my test setup for the 3020 amp in balanced configuration. Both channels are powered by a 1200W power supply.
The power and control of this setup is enormous. It equals my version of the X600 amps.

I found ConnexElectronic during my search for a high-power, hi-quality audio SMPS solution available to the public in small quantities for some amps I was building as part of a larger ambitious R&D project. In the process, I made acquaintance with Cristi, which quickly grew into a transcontinental friendship. I have learned great respect for his hard work, skills with electronics and willingness to be forthright and earnest. I really like these power supplies. The Connex supplies are very robust designs that can easily be customized to suit nearly any audio power supply application - frankly for a bargain price. The soft-switching resonant LLC topology (among some of the others available) allows for very efficient, compact, noise-free amplifiers.

The Hypex UcD technology has also become a favorite of mine. Specifically, UcD technology is truly elegant in design and it has become the standard I judge amplifier performance by.

I'm thrilled with the performance of these amps. Quiet, clean, efficient, powerful and accurate. I implemented a bottom-to-top forced cooling method that works well for the application they are being used for. The aluminum cases were machined, drilled and etched by my home-built CNC. Each channel has a green/red bi-color LED channel mute/enable button that monitors channel power supply errors and a volume knob with a green/red bi-color LED built in for channel signal detection and clipping.

finally got some pictures on my TA3020v4 board mounted in its very unassuming case its mainly a test fit so far.

Originally got the 8x8 amp for the case to build a stereo lm3886 amplifier, which it was for a number of years but the board design had a bad hum problem so I decided to put this board in it.

So I'm wondering what the best air path would be so I could add vents and a fan.

at the picture is one channel because they are monoblocks.

This is the most insanely stuffed amp installation I have seen so far! Keep it up!