Need some help with 2 way crossover

I know it´s a simple question for You folks, but my old year school math is a bit rusty.

If I connect them to a passive crossover designed for 8+8 ohm and 2khz crossover frequency all will be fine since the impedances of the crossover and speakers are the same. Ex Beyma FD250

But now suppose I have the same crossover but designed for 8 ohm woofer and 16 ohm tweeter impedance. Ex: Beyma FD2X series

My question is, will the crossover frequency rise or fall with the same 8 ohm impedance woofer and tweeter ??

I´ve tried some online calculators, but couldn´t get a right answer...

I suppose the tweeter will be louder because it´s the half impedance, so there is a risk....

Thank You for Your valuable time.
•••
P

Joined 2002
What order of crossover? Inductors double and capacitors halve for a doubling of impedance...however re:'Supose I have a 8 Ohm woofer and a 8 ohm tweeter' - you never do, impedance for any driver varies with frequency, and you need to know the actual impedances at the crossover frequency before you calculate crossover values...And you need to calculate an L pad for the tweeter to deal with the difference in sensitivity.
•••

Joined 2007
The XO frequency for the tweeter will change especially if it is a simple first order cap on the tweeter assuming XO values stay the same.
16 Ohms is double the impedance so cap value will be half if just a cap in series.
Normally if impedance is doubled I would expect the driver to be "about" 3dB down.
•••
M

Greetings from Portugal do the USA and Australia

Thank You for Your prompt answers.

Perhaps I didn´t formulate my question correctly....or You didn´t understand my question right ....

The FD250 crossover in question has a Xover freq of 2khz and is 12db/oct so a second order one, suited for 8 ohm speakers Woofer and Tweeter.

If i use a woofer and a tweeter of the same inpedance there is a match I mean the xover freq will stay at 2khz and and the impedance of the crossover and speakers match. Levels will be balanced with same sensitivity drivers.

But now I have the same speakers with the same 8 ohm impedances and i want to connect them to a same type of crossover but designed for 16 ohm tweeter impedance.
Assuming I don´t use l-pads or some other correction components, I presume there will be a cossover point "frequency shift", what i want to know is if it shifts high or low, because if it shifts low, there is a risk for the tweeter.

I know that frequnecy varies with impedance, so do you mean that the crossover point stays at the same requency, but what varies is the perceived tweeter speaker level (more or less volume)?

Can i think of the analogy of amplifier - speakers impedance match ?

Thank you again for Your patience.
•••

Joined 2009
The simple answer is the High pass pole will drop in half. Sort of, ignoring the 100 or so relevant factors.

Speaker building is not plug and play.
•••

Joined 2006
s18.photobucket.com/albums/b117/wolf_teeth_speaker/?start=all
If you are saying the xover freq (Fc of the stock xover) will halve on a 12dB xover when you double the driver's impedance value, this is incorrect. If it is a 6dB xover, this is correct. In a 12dB xover the Fc of the circuit will remain the same, but the Q of the filter will change- of course speaking in textbook/ideal terms.

With that set-up, you cease to have a single cross-over frequency. It's true that it is best to know actual vs. frequency, rather than nominal impedance, but I think that the above description is nevertheless fairly accurate.

Joined 2006
The Beyma crossovers are very driver specific, designed with one Beyma driver in mind. Some you can change impedance for the woofer like 4-8 Ohm and attenuation of the tweeter between others.
Better knowing what you are planning to do with the models of the drivers you have (specs) and from there checking if you need a new crossover or not. The crossover tables are not going to work in this case. They are just an approximation or model.
12 db Crossover Table
•••
C

Joined 2012
In my previous post # 7, I should have said that the high-pass filter cut-off becomes raised by an octave to 4 kHz. That is, the cut-off frequency of the high-pass filter, if designed to produce -3 dB for a 16 Ohm load at 2 kHz, makes that cut at 4 kHz if the actual load is 8 Ohm.

Sorry for the confusion, I was thinking in terms of a low-pass filter. I'm surprised that no-one else here didn't beat me to spotting my mistake.

cT equals piD said:
I'm surprised that no-one else here didn't beat me to spotting my mistake.
Click to expand...


Sorry, wrong again. The only correct answer was given by wolf_teeth. The frequency does not change, only the Q of the filter.
•••
M

Joined 2010
First i would like to thank You all for your answers.

I could write in Portuguese, since we are neighbours (300 km), but I think the other members wouldn´t understand....

Ok so I have self built speakers with eighteensound 15cx1000 (coaxial) drivers for tops and 15mb1000 drivers for subs, and we have been using them for wedding animations for about two years powered by two Yamaha P7000 amps and a Dbx active crossover crossing the subs at about 200-250khz. Box dimensions are those of ordinary commercial ones.

On the tops I have Beyma FD250 crossovers with default jumpers (no attenuation and no equalization) crossing the woofer and the built in HF driver.

We have also some other self made speakers also eighteensound drivers but with separate woofer and HF drivers with horn, so no coaxials., and the same crossovers.

My brother says the other speakers have a more "crystal" sound, but I presume it´s the horn making its job ....

As I´ve seen that beyma has crossovers specific made for their coaxials, I was tempted to try one out, but the HF section is designed for 16 ohm, that´s why I started this new thread....

I feel that the speakers are very goog stuff and have a balanced sound, as the DBX with it´s self calibrated microphone produces a flat plot on the display when performing auto-eq.

Thank you once again
Thank You again
•••
C

Dissi said:
Sorry, wrong again. The only correct answer was given by wolf_teeth. The frequency does not change, only the Q of the filter.
Click to expand...

Considering an ideal 2nd order LR high-pass filter, I calculated C = 2,5 microF and L = 2,55 mH. Then with inductor L in parallel circuit with a 16 Ohm resistor, and cap C in-series with L || R, at 2 kHz, I calculated the voltage division that occurs. The voltage across the resistor turns out to be one-half times the total voltage applied across the network. This is of course what it should be, that is - 6 dB.

Then I repeated the above calculations, except that I substituted an 8 Ohm for the 16 Ohm resistor. Voltage division with the 8 Ohm resistor at 2 kHz is now 0,25.

The only thing that I can conclude is that wolf_teeth and myself are not looking at the same thing. Can you or wolf_teeth explain how it would be possible to reduce the resistor from 16 Ohm to 8 Ohm while maintaining an identical voltage division?

cT equals piD said:
The only thing that I can conclude is that wolf_teeth and myself are not looking at the same thing. Can you or wolf_teeth explain how it would be possible to reduce the resistor from 16 Ohm to 8 Ohm while maintaining an identical voltage division?

He asked what the Fc of the xover would be if he changed the impedance from 8 ohms to 16 ohms, when it was originally at (for example) 2kHz for a 12dB xover. The answer is still 2kHz after the impedance change. The filter will still have a corner frequency of 2kHz, but the Q of the filter will be different.

Only in a 6dB xover AKA first order will the actual xover point or Fc shift an octave.

For example- If you have a xover meant for 4 ohm drivers initially, and it has a BW2 alignment, and you swap the drivers for 8 ohm drivers;
The Q of the filter will shift from 0.707 to 1.414 and the Fc will remain the same.

wolf_teeth said:
He asked what the Fc of the xover would be if he changed the impedance from 8 ohms to 16 ohms, when it was originally at (for example) 2kHz for a 12dB xover. The answer is still 2kHz after the impedance change. The filter will still have a corner frequency of 2kHz, but the Q of the filter will be different.
Later,
Wolf
Click to expand...

I took the OP to be asking something different from what you say. He asked what would happen if he connected a tweeter and woofer, both 8 Ohm, to a pre-assembled cross-over network with a 2 kHz cross-over frequency, 2nd order, calling for an 8 Ohm woofer and 16 Ohm tweeter.

When you say "The answer is still 2 kHz after the impedance change" does that include changing the values of capacitance and inductance of the caps and coils of the cross-over network to keep Fc equal to 2 kHz? If so, I think that you misunderstood what the OP was asking. The only change that the OP had in mind, I believe, is connecting a 8 Ohm tweeter where a 16 Ohm tweeter is supposed to be connected.

MAAC0 said:
First i would like to thank You all for your answers.

I believe that I'm correct in this, even though others here are saying that what you propose won't shift the cross-over frequency at all; that to me doesn't make any sense at all.

Joined 2012
mzbinden.ch
The confusion is caused by randomly interchanging the words poles, cut-off frequency, corner frequency and crossover frequency. For me it's a high-pass filter at 2 kHz with a Q of 0.25. Of course, the -6 dB frequency is around 4 kHz. 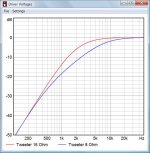 Joined 2006
OP needs a new crossover designed on purpose for his applications. Doesn't matter who is right or not. The Beymas crossovers obviously don't work, or are not made for such drivers, only by luck they will delivery acceptable workability.
•••

He needs a crossover for the Eighteen Sound 15CX1000 COAX with CD Eighteen Sound ND1480 and a co frequency @ ~1KHz.
You can use the filter already made for the other drivers and reducing about 2dB in the CD driver (ND1460 vs. 2dB attenuation/ND1480) and changing the frequency from 1K5Hz to 1K0Hz. Simulate, build and test.
http://www.eighteensound.com/renderPdf.aspx?pid=247
http://www.eighteensound.com/staticContent/applications/kits/18Sound_kit15.pdf

cT equals piD said:
If so, I think that you misunderstood what the OP was asking. The only change that the OP had in mind, I believe, is connecting a 8 Ohm tweeter where a 16 Ohm tweeter is supposed to be connected.
Click to expand...

Nope- no change of values. Speaking from textbook or ideal situations, the xover frequency as the filter operates would not change. The fact that the rolloffs of the drivers are not incorporated to yield the effective acoustic slope and Fc is something you can't even fathom due to no graphs, plots, etc.

That said- the Fc of the xover will not change if it is 12dB or higher, but the Q of the filter will. I didn't misunderstand.