I need a little help with a build of a MF Citation 12 I'm working at. A P2P build, for what that's worth, and I built only one channel at the moment.

I followed papa's schematics, with some slight mods. I used MPSA42 and MPSA92 transistors, IRFP240 mosfets, eliminated the diodes between the source and drain of the latter, removed R8 at the input. 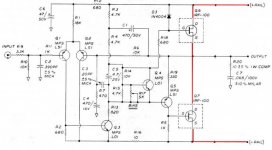 The PSU is nothing special, Nelson's schematics with a bit more of capacitance and some bleeding resistors. Two 300VA toroids.


Using only a variac, slowly raise the line voltage to the channel while watching the output. The output voltage should exhibit DC offset at first and then settle into a +/- 2V sine wave; if it does, continue to slowly raise the voltage until the full line voltage is achieved.​
I gave it a 1V peak-to-peak sine at the input and no load. It's not clear to me how much of DC offset I should see before I get the since wave at the output. I raised the variac until half of the input voltage (that's 110V for me) and I get something around 30V of DC at the output.

Looked wrong to me and I didn't dare to go all in with the variac. Before I blew the output mosfets, I disconnected them and gave a full 220V to the PSU, which means +-42VDC to the amp. I looked at Q1's collector where I expected to see the input sine wave but amplified. Here's what I got (not including the PSU DC offset of course) - PLEASE ENLARGE THE THUMBNAILS AS THEY SOMEHOW GOT REVERSED: 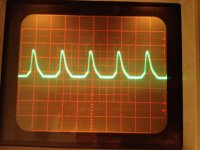 I'm still a noob but this doesn't look correct to me. I also looked at Q2. I expected the base to show nothing as the output mosfets are disconnected but here's what I saw: 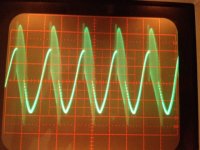 As a bonus, here's Q2's collector: 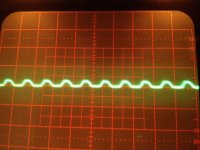 I think I got something wrong in the wiring as all the transistors and mosfets are tested OK. Any suggestions on what, if any, could be wrong?

BTW this is the layout I made: 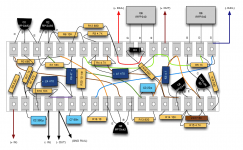