So I've been studying diy audio for some time now, trying to figure out how to build a set of speakers. I quit a 2-way budget bookshelf project since I don't really need more bookshelves and jumped head-long into full range 3-way towers. Probably biting off more than I can chew, so I'm needing some help.

My design is thus: two 10" Dayton Reference 8ohm woofers in parallel, Scan-Speak 5.25" midrange, and a Vifa XT25 1" ring radiator tweeter in a MTWW design. The mid and tweeter will have their own ported (or possibly infinite baffle) cabinet and the two woofers will share a sealed enclosure. The x-overs will be at 300 and 3000 (what I understand to be audibly optimal levels that work well with the drivers used, thanks Leonard Audio), all 2nd order Butterworth, Zobel circuits on the woofer and mid (the Vifa doesn't need one), ~3db of padding on the mid.

The curves I got from Eminence and Crossover Calculator are attached. 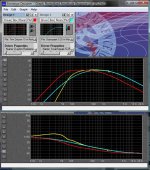 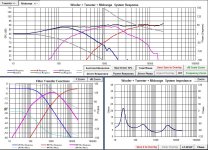 Eminence:
I'm thinking the bass cab might do. I'm between an infinite baffle design (cyan) and a ported enclosure (yellow) for the midrange cabinet. What are your guys takes? I'm thinking that the ported design gives a more flat curve but I'm worried about the phase issues and a lack ideal port tube sizes.

Crossover Designer:
So, I know those curves are far from perfect, I've got fiddling to do, but there are a few things I want to understand better before I do. First, no matter what I do, I get big problems from the midrange bandpass in that the transfer function is much less flat than I want. It seems to falls off to the low frequencies instead of being symmetrical, and that's sad because the driver itself is amazingly flat. I seem to be able to fiddle with these transfer functions a bit by adjusting cap/inductor values, but I don't know if I'm doing other untold damage that either I can't read or these spreadsheets can't show. I'm guessing most damage I'm doing is in phase shift or distortion of some sort.

Next, my understanding is that zero phase shifting is best, but of course, a lofty goal. So how is this? Is that almost 360 degree shift too slow, too big? I don't think I really know how to read phase problems.

Also, the Zobel circuits that are calculated on this sheet don't seem to flatten impedance like I was promised by other speaker design websites, and I'm wondering why and/or if it's a good idea to just fiddle with numbers on the spreadsheet and see what happens. Again, not sure if they're adding something else bad to the design that I can't see.

Lastly, I'm planning to run these speakers on a Harmon/Kardon AVR 235, which is normally an 8 ohm amp, but since a good portion of that curve (the high wattage sections) are well above 4 ohm, what do you guys think?

I'm not 100% on any of those drivers either, though I really like the mid and the tweeter, and would like to stick with Dayton Reference 7"s, 8"s, or 10"s. From my research, it looks like a pair of 8's have about the right amount of sensitivity and a little less boomy a curve, though 7"s are a little weak on the low end. I have a subwoofer now and plan to eventually build a quality one (mine is really pathetic, but it works for now), so as much as it looks like I'm trying to get true full range in these speakers alone, I'm ok with patching in the bass with my sub. Also, my receiver has a handy x-over feature built in for speakers/sub levels, which is helping me tremendously right now.

Anything else I'm missing?

Thanks guys for your help, and sorry for the long post. Any help you could offer would be most appreciated.
•••
P

How big a box can how handle? two of those dayton woofers need ~360L (over 12 cu ft), perhaps the 8" units have a more sensible Vas?
FWIW, I'd stick with a closed box for the mid, & the mid's sensitivity seems to be a good match the two woofers with no padding, leaving the woofers with ~ 3db for BSC. I'd be inclined to choose your lower xover frequency based on the baffle step frequency (depends on cabinet width) ...
•••
G

Over 12 ft^3? Yeah, not doing that. But how do you get that? I just used Eminence Designer's suggestion of 2.507 ft^3 (their "high fidelity" suggested volume). I do have it set on "heavy damping" mode, which basically fills the cabinet with stuffing, but even empty Eminence recommends 4.4xx ft^3.

I tried running the 360L number, but it looks more like a lump and less like a tight, flat-topped curve. Eminence issues?

If I were to go to an 8" driver, the sensitivities are lower. Should I then be using the baffle step gain to level out frequencies?
•••
P

I use Unibox.
Re baffle step - Baffle Diffraction Step
•••
G

So baffle frequency is -6db. Just plain old -6. Seems like I need more sensitive woofers from my calculators.

The baffle width is the inside or outside dimension of the baffle?

Anyone have advice for flattening the mid filter response?
•••
G

I'm still looking for some crossover help. I don't understand why the proposed bandpass filter has such a non-flat curve, and I'd really like to flatten it out to take advantage of the Scanspeak's flat mid response.

As far as the general design, I've been encouraged by Leonard Audio's website to vertically align voice coils, but other websites suggest that reflected sound effects of the tweeter being in a curved section are far worse than the phase misalignment.
•••

I am assuming you would like to see a flat top on the band pass response. To do this you will need higher order filters as 2nd order filters have quite a slow roll off.

Th bump in the response at arround 100Hz is due to the resonance peak of the mid range driver. If you want to rem ove this you will need to add a conjugate load tot eh mid driver to smooth its impedance response.

Where are you getting the data you're plugging in? Bagby's looks cool, but does it use both magnitude and phase for SPL and for impedance?

As for Zobels, there could be a couple of factors:
1) They can be sensitive to parts tolerance if you're trying to notch a narrow impedance peak.
2) How good are the parts? Cheap coils/caps have a bunch of resistance which gums things up.
3) High frequency impedance rise is not 100% inductive, so a parallel RC can't really compensate perfectly.
•••
G

head_unit said:
Where are you getting the data you're plugging in? Bagby's looks cool, but does it use both magnitude and phase for SPL and for impedance?

As for Zobels, there could be a couple of factors:
1) They can be sensitive to parts tolerance if you're trying to notch a narrow impedance peak.
2) How good are the parts? Cheap coils/caps have a bunch of resistance which gums things up.
3) High frequency impedance rise is not 100% inductive, so a parallel RC can't really compensate perfectly.
Click to expand...

1. As of now I'm looking at calculated values, but when I get something really good I'll look to adjust for available components. I'm gonna be using Dayton 1% caps and I plan to adjust inductors myself, so I'm guessing that I can adjust further. Speaking of which, how good/bad an idea is it to run caps in parallel to get closer to ideal values? Should it be avoided or used whenever needed?

2. Again, performance curves are for ideal parts in the sim. I haven't bought anything yet.

Is it a good or bad idea to start adjusting filter component values myself to make curves look better? I'd be adjusting them based on frequency response, but I don't know that there wouldn't be terrible phase effects by doing that willy-nilly. I'm assuming Butterworth and Linkwitz are much smarter people than I am.