Joined 2016
So, I've played with tons of home and car audio systems over the years and I can follow a signal path just fine. I fall flat on my face though when it comes to computers, wireless, and anything involving those. I'm trying to teach myself though, so hoping you guys can help me through this...

I have a very Frankenstein'd system in my workshop. Here's what it consists of right now:

-The entire power supply/amplifier section from a Panasonic SA-HT system (a low to mid-level 5.1 HTIB) 600w total system power according to Panasonic, but really it's 370.
-An SSL SX310 car audio crossover (powered by a 1amp wall-wart)
-DROK XR1075_A Pre-amp tone/volume control module
-Sony 10" powered subwoofer
-4 bookshelf speakers, (2) Bose and (2) Design Acoustics
-I also have a y-adapter on the sub output and a coax cable running to an old 2 channel receiver powering 2 junk woofers on either side of the shop. I want that to all go away though...

Signal originates from my computer or my cell phone, which currently also have to control volume. (NOT ideal.) The Drok pre-amp is recently acquired (from Amazon), but not integrated yet. Signal will go into it first though and it will have master volume control duties from now on. From the Drok the signal goes into the SSL x-over which then puts out (4) 2nd order, high-passed channels (~200hz to the D.A.'s and 150hz to the Bose) to the 4 main channels of the hacked Panasonic amp, and low-pass
(150hz/1st order) to the powered sub.

(Center channel and sub outputs of the Panasonic are basically unusable because of some kind of internal circuitry that has the levels turned way down. Non-adjustable without the crappy head unit and remote control.)

It's a hodge-podge, I know, but it's only cost me about $50 total so far and it kinda rocks!

I like my music loud, and I like it to be everywhere, so I actually want to (wirelessly) supplement all of this by adding 2 more speakers on the other end of the shop. (I'm going to build these using Bose cubes paired to the (2) 5 1/4" subs and passive x-overs out of an Advent Mini II subwoofer, all of which I already have.) I don't want to take the easy route on the wireless though, (that doesn't teach me anything), and I'd prefer to hack something else that I recently acquired...

I picked up a Rocketfish RF-WHTIB wireless receiver/amplifier from Goodwill for only a few bucks (like $3 and change...). The internal stereo amp is (apparently) an honest 25w/ch, it has it's own volume control, and seems like a good candidate to power a couple more bookshelf speakers. I don't have the transmitter though, so it's basically unusable at the moment. I'd like to get a wireless signal into it, but don't know how.

Fortunately, the wireless module in the Rocketfish is a separate component and not integrated into the other circuit boards. (Seems this should make it significantly easier...) Here's a pic: 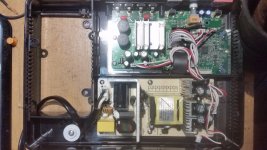 Down in the lower right-hand corner you'll see the wireless receiver. I'm assuming that I can remove this and somehow replace it with a different one, but what I don't know is:
1) what transmitter/receiver module type to buy
2) how I'd go about integrating them
3) With Rocketfish volume viewed as "gain", will the (new DROK) master volume ultimately control it's output?

Plus, I don't know how to integrate a new corresponding transmitter into the existing FrankenStereo on the other end of the shop.

And, just to make it a little more challenging, of course I'd also like to add another subwoofer at the far end of the shop as well. (Still hunting for those components though...)
But how? A second wireless receiver, I'm assuming? Also linked to the same transmitter? (Can they do that??)

When all of this ridiculousness is done and working, I'm going to accentuate the absurdity of it all by building some kind of cool enclosure, recessed into the wall, for all of the electronic componentry. lt'll include an older notebook acting as media server / internet access point. hehehe
Because I don't have enough other things to do...!!

Thank you for taking the time to read all of this and for any advice you can offer. It's appreciated!!

Joined 2016
Did I even post this in the correct forum? My problem/question is obviously along the lines of system setup, but I can't figure out where else I should or could have posted... Unless I just missed something obvious...
•••
Show hidden low quality content