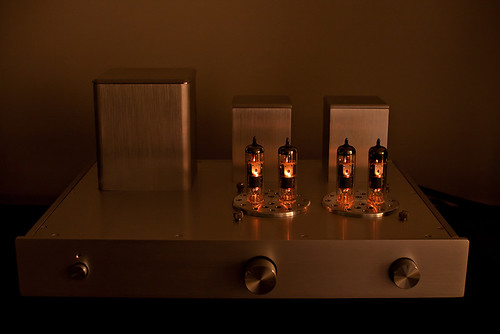 Finally done my first tube amp kit! I've built a bunch of smaller headphone amps before, but this was my first full size amp build. It's a stock k-12g tube amplifier kit with some of the mods listed at diyaudioprojects.com. I replaced all the stock caps in the amp section with Orange drops, I added snubber caps and connected the first and last heater pins to balance the inrush current. I had to put the tube sockets up on "stilts", thanks to James Bartlett's write up for that idea, in order to mount the tubes on the top of the chassis. I replaced the provided volume pot with an ALPS pot. I also added a bleeder resistor to the largest cap in the power supply section.

The transformers are mounted on top of the chassis withe the OPT's 90 degree angles to the power transformer. The PCB is hung from the top of the chassis so that everything was attached to the top of the chassis so I could remove the bottom to do further work. All the chassis bits and parts where ordered from VT4C, I love the look, but more on VT4C later. I was fastidious about double and triple checking everything as I went so luckily it worked perfectly on first power up. And it sounds SWEET I was really worried about hum, but this amp seems to have almost negative hum... I listened to some live recordings that I love, but have significant background hiss and they almost sounded like a studio recording through this amp. I'm using a tube magic DAC in between the k12g and a sony blu-ray player and I couldn't be happier with the sound, much fuller sound with great presence as compared to the NAD 3220 I was previously using.

Now onto the bad. I went with VT4C after seeing many others here have used him. I have to admit, his stuff looks great and I have no complaints about all the little bits and bobs I bought, but I have some serious issues with the chassis and transformer casings. The machining accuracy was terrible. The transformer casings weren't perfectly square so I had some issues assembling them. The whole chassis was built with terrible accuracy. Instead of drilling all the holes accurately, it seems like they just made all the holes bigger than the screws used in them. I gave up assembling the chassis like I would usually, I had to but all the screws in loosely all at the same time then tighten them a little at the time and even so there where a couple screws I just couldn't put in because the holes didn't line up and I had to do a lot of drilling, sanding, cutting and scraping to get everything to fit nicely. Not a fun job when your workshop consists of a kitchen table and a dremel tool The supplied screws and bolts where terribly cheap as well, they stripped like I was shoving fifties down their pants... I had to be VERY careful with any screws I planned on being able to unscrew later on... some of them I highly doubt I'll ever be able to take out again.

I forgot to take pics of the internals, but I'll be adding new volume and input selector knobs soon, so I'll take some then
•••
A

"stripped like I was shoving fifties down their pants"... Good line.

Too bad you had such trouble with the chassis but it does look great!

Several months ago I was considering purchasing some transformer cases from vt4c, but ultimately decided it was too much of a PITA with shipping and all. While I sincerely hate you had to go though such a hassle, I am glad to finally get an idea of what their stuff is really like. Methinks I'll steer clear of them now.

Chassis-wise I'd say you definitely made chicken salad out of, er... guano.

What an amazing result!
I wish I could make something like that!
Well I have a dumb question: what are the 2 pots on the case for?
One is for volume I guess but the other one...?
The kit which serves as a basis has only one pot (correct me if I'm wrong) so I was wondering what the second knob was for?
Ain't that stupid?
•••
Show hidden low quality content
You must log in or register to reply here.
Share:
Facebook Twitter Reddit Pinterest Tumblr WhatsApp Email Share Link
Top Bottom