I’ve been fortunate enough to have been given this amplifier for free.
It does however blow the main fuse when switched on.
I’ve tested it with the PSU isolated and it blows the fuse almost immediately
I’ve tested it with only one channel (dual mono) and it blows after a minute.
There doesn’t seem to be much in there. 4 transformers. A pcb for the LEDs and two relays. Both potter and brumfield T92P7D22-12.
Advice gratefully received. 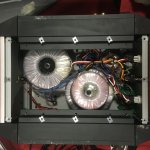 The fuse is the correct, slow-blow, one? Big transformers have hefty inrush currents, you need the fuse to handle this. From what I can work out this unit has two big PSUs and a preamp PSU, all independently fused?
•••
S

Sorry, double checked preamp fuse. It doesn’t seem to be the recommended value. Going to find a magnifying glass.
•••

There are more than one type of glass fuse. Mark referred to to "the correct, slow-blow one..." which usually has a type marking including T (time delay) as opposed to F (for fast) to distinguish the characteristics. In any case, fast blowing fuses are simply a length of plain, plated wire. Slow blowing fuses look a little complex as they may be over-wound with more wire to cool the fuse wire or otherwise arranged to delay the burn and prevent brief spikes from causing nuisance blowing.

The preamp won't draw significant current though perhaps if there were a number of relays in there, it might. In practice, it will only need a fuse large enough to not blow with the brief inrush current when powered up. I doubt anything more than a plain fast blow type is needed there if it is rated at 650mA.

If the previous owner tried to resolve the fuse blowing problem the same way, they would likely also have fitted the common fast blow types and sold it that way too, leaving the problem to you. The fuse types aren't specified in the user manual but MF aren't known for their attention to such details nor a lot other problems lurking in their products.
•••
P

Jez Arkless of Arkless Electronics in Northumberland used to work for MF. Some of the things he has divulged are...well....you would have to ask him. He might know an answer to your fuses blowing.

Thanks Puffin,
I’ll seek him out.
I’ve changed the fuse to the correct slow blow value.
After briefly powering up for a minute. It now blows straight away.
I’m guessing it’s the relays. There isn’t much else in there. I’m going to test with a multimeter. I ordered two replacements so they may be here next week.
•••

Quite likely those relays are part of an inrush current limiting circuit, and they have welded closed
•••
S

I thought something like that.
I took them out and tested them. All switching ok and current flowing when they do.
There aren’t schematics available so scratching my head a lot.
•••

Try with the transformer secondaries disconnected from everything. If the fuses still blow, either the inrush limiting circuit is not working, or the transformers have a primary side short
•••
S

Thank you,
I have discovered an in rush capacitor showing signs of blackening.
Going to check that. If that doesn’t change anything. Then I guess it’s fair to assume the latter. Primary side short.
•••
S

I’m also going to contact musical fidelity. See if they can furnish a schematic.
•••
S

Changed the cap. Switched it on. Lit up for 10 seconds. Switched it off and on again. Ok.
Switched it on again. Tripped the main fuse.
I’ve disconnected the main pre-amp transformer.
This leaves the two main toroids and the small one which powers the LEDs and switched the relays.
If I switch in with one mains toroid connected it switches on fine.
If both are connected then it trips the mains again.
•••

If you find ANY of those Rifa caps, change them! especially if they look "cracked" on the outside. These very commonly fail and fail as shorts - and usually go up in smoke quite spectacularly
•••
S

I’ve replaced like for like. Though I read about them after I ordered them.
I’ll have to wait until Xmas to buy suitable ones.
Currently I can switch it on with both mains toroids connected. Pre-amp disconnected.
I’ve not left it on for more than 10 seconds. As I’m a little loath to keep checking fuses.
Both secondaries for the mains toroids are +-51v
Which suggests they are ok. I do t have a schematic. The toroid for the relays and LEDs seems fine. Which leaves the pre amp toroid and any issues with the inrush.
•••
Show hidden low quality content
You must log in or register to reply here.
Share:
Facebook Twitter Reddit Pinterest Tumblr WhatsApp Email Share Link
Top Bottom