I'm new to amplifier repair and I need some advice here. I received some times ago a Musical Fidelity E11 to repair from a friend of mine which did not power up. The fuses where broken so, I quickly tested parts and found that all the right channel power transistor were shorted. So, I replaced every one of these 4 TIP35C as well as the TIP31 which was on the heatsink. I also checked what seem as the previous stage of power and noticed for every ZTX753 and ZTX653, once desoldered and tested on my multimeter gave a way too small Hfe value. So I replaced them as well. As every component around seemed ok, I powered the amplifier and everything working fine, gave it back to my friend.

He uses his amplifier for some month without any problem but now, he gave it back to me saying there was a faulty channel. What is strange and why I post here is that it's again the right channel which is broken. But, this time, there is no short on the power transistor but I measure about 46/48V DC on the right speaker connector. So, before I desolder anything to test (as none of the transistor seems shorted or broken with a simple diode mode test) I'd like to know if this new problem may come from the previous one or my repair which may have not been properly done. I noticed a trim pot but did not touch it. I search and found this post which suggest it's a current biais but I cannot find any information on how to adjust it correctly (if a transisor replacement need any reajustment)...

Anyway, could any of you suggest a better way to find what is the problem? Maybe someone has the service manual or the schematic for it which would eased my research?

Thanks for your help and advices,
Simon
•••

Well anyway a schematic would be good...
But if the PCB is not so complex: try to separate the input stage and the output stage.
If you could find the 2 driver wires going from the VAS to the output stage you could
cut and short it and try it out without the output stage. In this case also you have to
lead the feedback from this shorted single point. At least this method could half the
area you have to check. BTW: do you have an oscilloscope? Or just a DMM?
If it's not clear just say and I draw you a sketch.
•••

I've seen several posts asking for Elektra 10, 11 schematics but I doubt you will find one, let alone a manual specifying bias current, unless it has been sketched from the amplifier by another desparate DIY. Don't assume that this E11 is the same as other Elektra models like E30 or E300 though. There are similarities sure, but always a few details that will confuse. I understood that original output transistors for the Elektras were marked with MF part numbers so perhaps this amplifier has had a few meltdowns and the TIP35C replacements fitted earlier may not have been ideal.

There certainly needs to be at least a bias control trimpot for each channel but this must be readjusted to the correct bias, each time the output stage transistors, including driver transistors, are replaced. That may be where the latest disaster began, if the bias became too high with the particular replacement parts and eventually the amp went into thermal runaway with a little extra volume, extended use and heating up.

There is a great help in a stereo amp, if one channel is still working. You should be able to use its bias setting as a standard for setting the (as yet unrepaired) bad channel. To measure bias, you need to measure the voltage across one of the output transistor emitter resistors, assuming these are fitted. They are usually unmistakably large and you need a reasonable DMM to measure the few mV drop across one of these low value (around 0.33 ohm) resistors in the good channel. Use an average value if they they differ much between each (presumably) Quasi-complementary pair of devices. Actual bias current can easily be calculated by Ohm's law but all you really need is to set that same emitter resistor voltage drop, by adjusting the bias trimpot in the bad channel - once it is repaired.

Don't power up the bad amplifier unnecessarily until it is repaired. If there are 2 trimpots in each channel (I believe there is only one), determine by a small adjustment only, which pot. adjusts bias and which adjusts DC offset. Note the small voltage measurements across the resistors and the approximate temperature of the heatsink first, so you don't forget where the settings should be returned to.
Last edited: 2016-02-29 12:15 am
•••

Hi Ian,
Excellent advice! Due to the lack of current flow, I'm guessing the fault is in the voltage amplifier stage.

Hi Simon,
It wouldn't hurt to take pictures before you remove components either. 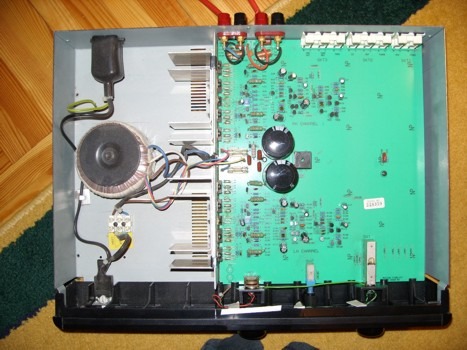 There appears to be only 1 trimpot in each channel, about 30 mm to the right side of each Vbe multiplier transistor mounted on the heatsink - according to this fuzzy image.
•••
S

Wow, thanks for all these responses!

@Cortez, I'm not sure to have understand what you mean but if you mean to separate the input stage from the power amplifier, this is quite clear on the PCB where these connections are. I do have on oscilloscope. But it's still unclear about the feedback.

@Ian
OK, I'll run for a full check of the transistors this time. I checked on the "original" channel and the TIP35C are not MF marked... (Maybe they also have been replaced by someone else some time ago..)

I do have a working channel so the biais adjust will be easy with this method. There is only one trimpot per channel. Maybe it would be a good idea to cut the power from the bad channel while measuring the biais current from the good one?

For your information, here is a better picture from one channel.

I'll probably come back once I've check and (hopefully) repaired everything.

Sorry to hijack this post, but I have the same amplifier. Were you able to repair it? Thanks.
•••

Hi cchean,
It is a very simple amplifier. Just be aware that it runs hot. If you run it for any length of time apart you really should have the other top piece installed. Don't run it with the top heat sink removed entirely. It heats up quickly.

One thing to be aware of is that because of the heat, the electrolytic capacitors are probably toast. Use good replacements from Digikey or Mouser in the same format (don't replace an axial cap with a radial one).

jaycee said:
Wow, TIP35 outputs being driven by TO-92 drivers ? Junk. Throw it in the bin.
Click to expand...

The TIP31 will be the VBE bias device for thermal feedback. MF have always used custom labelled devices and they have always been off the shelf parts. If they are being driven by TO-92 devices I would hope they are Darlingtons
•••
Show hidden low quality content
You must log in or register to reply here.
Share:
Facebook Twitter Reddit Pinterest Tumblr WhatsApp Email Share Link
Top Bottom