Got into this sometime ago and my first guitar stuff was not encouraging. Then I started looking around and I do not get it. Why are about 99% of the guitar cabs so poorly designed? Basically, you end up paying for a rectangular cabinet that is often a square baffle with the speaker right in the center and that`s it. On Ultimate Guitar ton of folks are discussing why one of the higher end manufacturers is putting polyfill in its sealed cabs and what effect this could have...I mean, in such a lame way this is discussed (i`m not trying to offend anyone) and thats something very simple in our world. Not even mentioning about baffle design, standing wave reduction and etc and on the bigger 12" cabs the baffle is wide so even a 12" will illuminate the edges at 800-1Khz of the ridiculously designed baffles and the guitar has some serious output there. Besides, the highly priced Celestions have serious breakups no one seems to address but my guess is this has to do with legato playing on the 4-5-6 strings which don`t have much sustain, so despite 3rd order distortion this might be somewhat desired.

They are fit for purpose. What perceived deficiency in tone are you trying to address?
•••

Because Hi Fi cabinet "rules" do NOT , repeat NOT apply to guitar cabs.
Celestion wrote an article basically called: **FORGET** Thiele and Small.

And of course NO Tweeters or crossovers.

This is a beloved Celestion Guitar speaker frequency response, typical "British Sound".
Any "correction" is considered a sin, go figure: 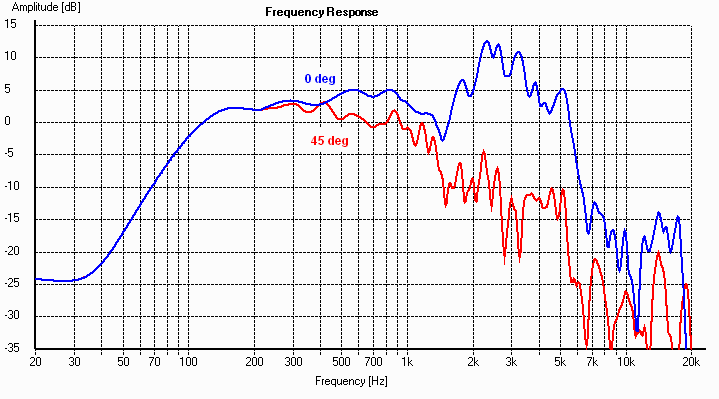 This is an Eminence Legend typical "American sound", same considerations: 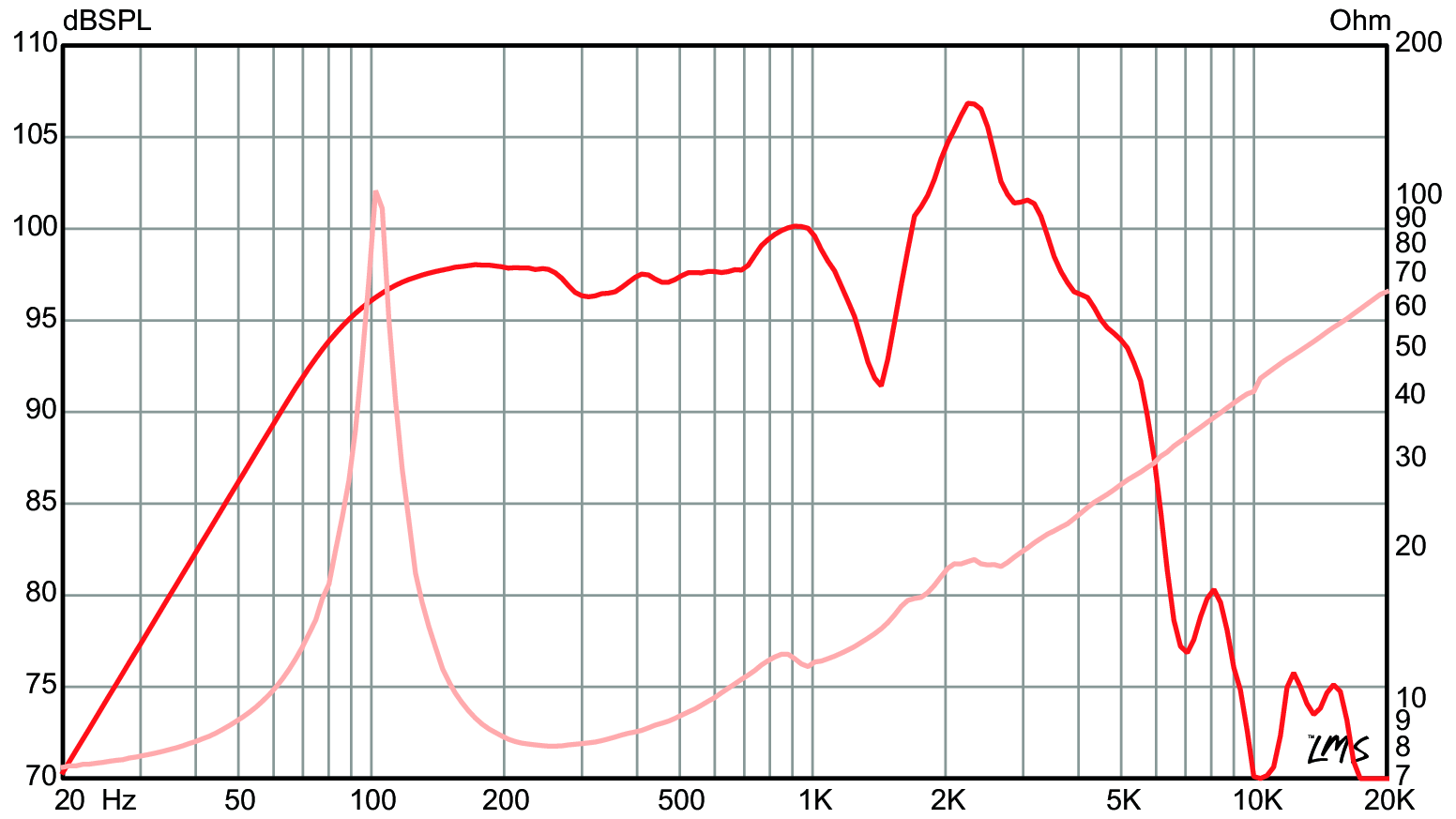 Yep, the traditional loudspeaker cabinet is as much an 'instrument' as the guitar itself!
•••
M

First graph looks like a G12T75? But I don`t get it. The cab should represent your guitar`s tone. Why would you not:

- add backwave absoroption to reduce the smearing caused by the backwave wave leaving through the thin paper cone with a delay
- work out a cabinet where standing waves are reduced
- work out edge diffraction by offseting the guitar driver (roundeovers will be impractically large here) and reduce sharp edges
- use diffusors or irregular inner shape to further kill standing waves
- at least damp the driver`s basket? I use G12T75 with V30 and they`re at best mediocre designed compared to Scanspeaks and etc.

Of course Celestion will publish papers like this - the easier it is, the more drivers they`d sell. But to me - such material is marketing ****. And whatever they say I am pretty sure they know they`re wrong.
•••

Try playing through a hi-fi speaker and all will be revealed !
•••
M

Thats not my point. A speaker will have a crossover in it and will expose the guitar`s higher range which is...well not to be exposed. But question is, why no one goes for perfection in a guitar cab - the way they are - just do some extra fiddling to make it better?

My understanding is, I grew with the sound of metal bands from the 80`s and 90`s. So today I try to replicate it. But they used **** cabs back then, so to replicate it i need a **** cab and thats a closed cycle. You cannot improve it just because it will sound different, even if better.
•••
F

The cabinet and peaky speaker are part of the tone. That peaky sound is cherished by many guitar players.

For perspective, run a line level source into your amp (if it has an appropriate input) and listen to a familiar piece of music.

Do not connect your guitar to your hi fi. It will be the last note you hear your tweeters play,

If you don't like it, then you can always change it. I see you're going to do that. Can I ask what your objective is?

Look at the tone stack too. Tone stacks are nothing like bass/mid/treble controls you might have on your hi fi.

Everything about a guitar amp and speaker is purpose designed. This doesn't mean you can't improve it. But you should have clear objectives before fiddling around.
Last edited: 2019-10-13 7:45 pm
•••

Hi,
From my experience as a studio engineer there is some points that could be 'better designed', mainly related to standing wave inside the cabinet ( for closed box design): i'm somewhat bored to spend time chasing this with eq.
Maybe make the cabinet much more rigid too. But honestly that is all i would do about it.
I know this is genre related* but 95% of time cabs are close miced so all the effort to try reduce diffraction may be benificial to your peace of mind, for the 'sound' it won't probably make a difference.
For the other 5% there is greater chance you'll pick floor ER than diffraction ( i sometimes use a distant electrostatic mic for 'solo' sound, positioned where i can have all the drivers to sum for multi drivers cab).

An other point could be decoupling of cabinet and room.

Mario Pankov said:
But I don`t get it. The cab should represent your guitar`s tone.
Click to expand...

The cab is part of the guitar's tone.

Guitar, amp and speaker cab create a whole which is greater than the simple sum of the parts, and together they become the instrument.

We want a guitar cab to resonate and add its own character to the reproduction.
•••

OK...go ahead and play an electric guitar through a hi-fi system and notice how absolutely crappy it sounds...yeah, I've tried it, and it sounds crappy. Guitar amps and cabs are not in any way hi-fi, nor is hi-fi eqipment suitable for musical intruments...those are two totally different realms. The fact of the matter is the amp and cab are musical instruments in and of themselves, chosen for a specific sound quality.

An electric guitar is almost always an instrument made up of 3 parts:

The guitar, the amp and the speaker.

All 3 contribute to the sound and therefore do not follow any rules other that you like the result. If that includes extremes like slicing up the cone a la Kinks so be it.

The one exception is Nile Rodgers. If you want to sound like him just get a di box.
The technical difference in how the guitar sounds between Nile and for example Jimi Hendrix is the sound of 'crap' amps and speakers.
•••

Charles Darwin said:
All 3 contribute to the sound and therefore do not follow any rules other that you like the result. If that includes extremes like slicing up the cone a la Kinks so be it.
Click to expand...

However, perhaps some of the members are too young to remember the Kinks and their distorted guitar sound - no fuzz boxes in them days!

I remember a Lemmy's interview circa 1995 ( he wasn't the metal god he became latter with signature head and cabs) where he explained how he used a pen to drill holes into the 2x15" he used at that time. Here is an example by the master himself:

At a bass forum, this would be one of the classic positions of a "guitard", as guitar players are known, to always be seeking dominance of the guitar in the band mix, and denigrating other instruments. Making the guitar fuller range just leads to either diminished bass/vocals, or being cut back to a traditional range at the mix.
Last edited: 2019-10-13 9:50 pm
•••

Most efforts (including mine) to pimp a Marshall #1960 cab towards more sound (sic) construction turned out to be a total waste. Add some light damping material, and brace the cab, notably the back panel (also known as "the hidden 5th speaker") and you kill its magic completely. Lifeless, harsh, sterile, no "oohmp"...
Last edited: 2019-10-13 10:04 pm
•••

krivium said:
I remember a Lemmy's interview circa 1995
Click to expand...

What an unconventional bass player in every sense!

One of my other hobbies is model building.

Looking forward to the release of this kit!

The album was released on October 27th 1979, reaching number 12 on the UK charts.

Yes i agree unconventional! A true legend now he passed away ( and thanks to the 'big four' devotion to the guy - well deserved in my view).

Leadbelly, here again i fully agree with you too.

My point with the video was that in the first second you can clearly listen to the driver distorting... before he push the gain on the head and start to sound like a kind of guitar!!
Maybe the bad habits to drill holes on drivers have been kept during all this years.
Last edited: 2019-10-13 11:23 pm
•••
G

Mario Pankov said:
But question is, why no one goes for perfection in a guitar cab - the way they are - just do some extra fiddling to make it better?
Click to expand...

That's the beauty of DIY - if you feel there is something lacking in the sound of current guitar cabs, by all means try to improve it (according to your own personal taste)!

Other guitarists may or may not like the result, but that's not the point. DIY is about making something for yourself, so who cares if you're the only one who likes it? You are precisely the target market for your own DIY cab, so you are the only one who matters!

I usually throw a cheap Walmart pillow into my DIY guitar cabs. I find it reduces the "boxy" sound of internal cabinet resonances a little, and I prefer it that way - particularly for clean guitar tones.

However, I have heard other guitarists use exactly that same "boxy" sound as part of their guitar tone. For them, making the cab less boxy would be a step backwards.

Fuchs Audio is the only guitar amp company I know of that uses acoustic damping inside their cabinets (at least some of them.) They also use fan cooling for the tubes, and other engineering advances.

Clearly, Andy Fuchs isn't slavishly bound to repeating everything Leonidas Fender did sixty-odd years ago. According to this interview ( How Andy Fuchs went from basement builder to boutique big-hitter - Guitar.com | All Things Guitar ), he's willing to use DC heaters, high-voltage MOSFETs, low noise JFETs, and other circuit improvements that were simply not available to Leonidas Fender, Jim Marshall, and other guitar amp pioneers of the mid 20th century.

On this very forum, I have brought up DC heaters a few times, and each time, some people reacted as though I was proposing something abominable, repulsive, disgusting.

I found that reaction quite bewildering. The engineering reality is that AC heaters are a horrible compromise that had to be made in the early 20th century, because at that time there was just no practical way to get amperes of clean DC at low voltage in a tube amp.

Things are very different now, with cheap switching power supplies everywhere, capable of delivering amps of clean DC power at low cost and high reliability, along with light weight and compact size. They are the perfect source of heater power!