The thing is: I want to build a small battery speaker for indoor use (and sometimes for outdoor use). So I ordered two Monacor SP-60/4 woofers and the Dayton tweeters based on Saturnus' (old) recommendations (later I heard the quality was less than before, but hey, I am no audiophile and anything better than some car speakers will do).

I was planning to put them in a box with two separate compartments of 4 liters (net) with a small 3.5 cm BR port (2x). So far so good.

I plotted this in WinISD using 15 W for input (TPA3116 for amp) and the cone excursion goes over the Xmax of 2 mm around 100 Hz and way over it under 60 Hz. Wouldn't that be a big issue? And why would Saturnus (and others) recommend such a thing as it would break the drivers? I guess I must do something wrong, or I misinterpret something. 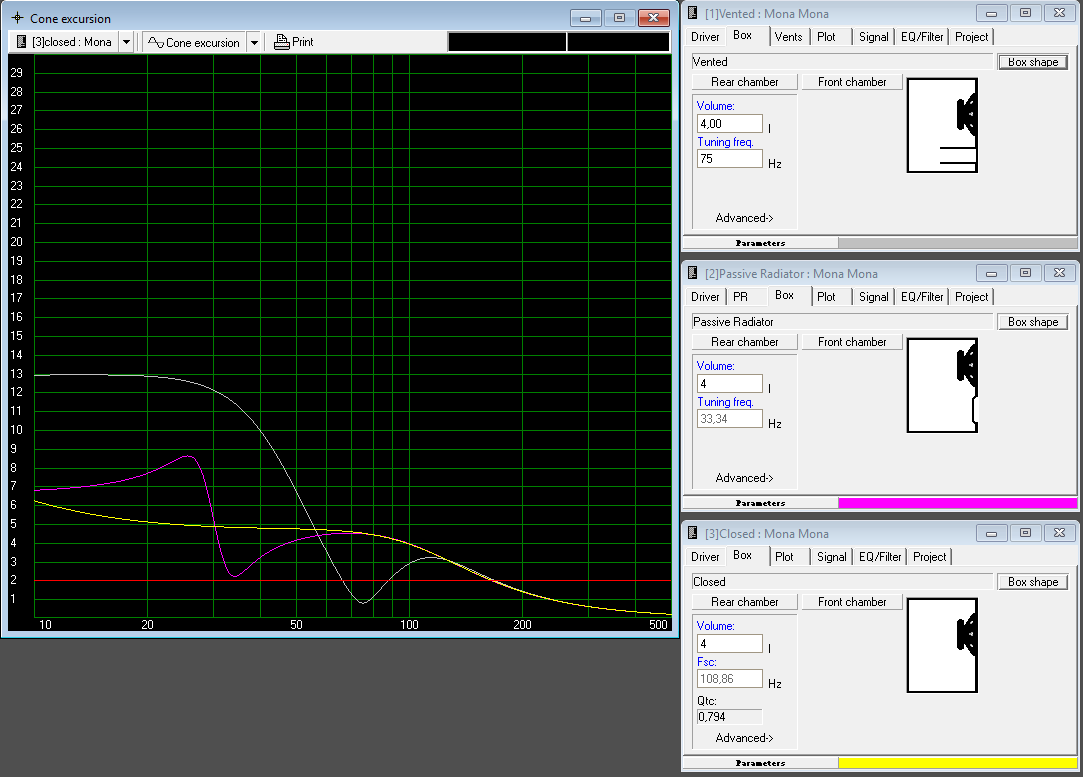 Also, I really don't know how I should wire the speakers... Tweeters in series with the woofers, or parallel? Or should I use two 2-channel amps? I am going to use a TPA3116 amp (or two).
As far as I understood will a 4 Ohm speaker in parallel with a 6 Ohm speaker result in a total impedance that is too low for most amps, but in the Boominator Micro those are parallel wired to one channel. Why is that possible?

I would really appreciate if someone could answer those two small questions, as I couldn't find the answer to these anywhere.
•••

You mustn't connect the tweeter directly to the amp, doing so would burn it out very quickly (in seconds). The simplest way is to use a crossover which can be as a simple as a single small capacitor in series with the tweeter. That protects the tweeter from all the energy going on lower down in the frequency spectrum.

You also never connect tweeters in series with the bass unit.

Paralleling 6 ohm and 4 ohm impedances isn't quite the same as if they were standard resistors. Impedance isn't a fixed value and varies with frequency. This means the tweeter could be presenting as nearer 20 ohms higher up the frequency range.

I'm sure those with more knowledge than I on speaker design and crossovers can advise you in more detail but for now don't connect as you mentioned.
•••
B

Oh sorry, I forgot to mention that I will be using a 6.8uF capin series with the tweeters as suggested by Saturnus.

But thanks, one of my mysteries is solved. Really hope someone could help me with the cone excursion question.
•••

Mooly said:
You also never connect tweeters in series with the bass unit.
Click to expand...

Mooly's right except for the phrase I quoted
Series connection exists as long as a series- crossover is designed for it.
It takes the same component count ( example : one inductor and one capacitor for 6 dB/oct filter slope ) as in parallel crossovers ...

Series vs. Parallel Crossover Networks
•••
B

Haha, now I just need some explanation why I don't understand Saturnus' recommendations, as in my WinISD they will break my drivers...
•••
B

So now I understand how to wire the woofers/tweeters, but still don't know why a setup is recommended (for example here and here), while according to my WinISD plot (and interpretation) it would break the woofers. And as guys like Saturnus ar far far far more experienced than me, I am pretty sure I must be doing something wrong. But what?
•••
D

Your result is correct. A small woofer like the Monacor SP-60/4 exceeds the excursion limit quite quickly. There's not much you can do against it except ignoring it. That's what usually is done.

Dissi said:
Your result is correct. A small woofer like the Monacor SP-60/4 exceeds the excursion limit quite quickly. There's not much you can do against it except ignoring it. That's what usually is done.
Click to expand...

Haha, thanks. That's what I will do then: ignore the crap out of it

Guess I will start building next weekend (weather is too nice to be inside soldering...).
•••
B