So I'm a DIY speaker guy, new to headphones. I thought I'd get a set for reference and listening later in the evening (I live in an apartment). After some research I picked up some Shure SRH-440s. I use the headphone out on my MobilePre that I use for measurements. Compared to my cheap in-ears the Shure's just didn't sound right. Little bass and overly bright. Headphone.com's measurement show fairly flat response, rolling off at 100hz.

Being a DIY type, I figured there had to be some way I could measure these things and correct the response. I searched the 'net, and came up with a site that had a tutorial for making an in-ear mic to measure headphones with a Panasonic mic capsule. I made my loudspeaker measurement mic with such a capsule, had it calibrated, and have a few capsules left. I wired one up, and took a measurement with it right next to my regular mic. They were close enough to use the cal file I had made for my "reference" mic.

I very carefully put the mic capsule into my ear, taped the lead to the side of my face to keep the cap from pulling out, put the 'phones on, and took some measurements. I'm not going to recommend anyone do this, for obvious reasons.

I adjusted the cap and the phones and took several measurements for consistency, and this is what I got: 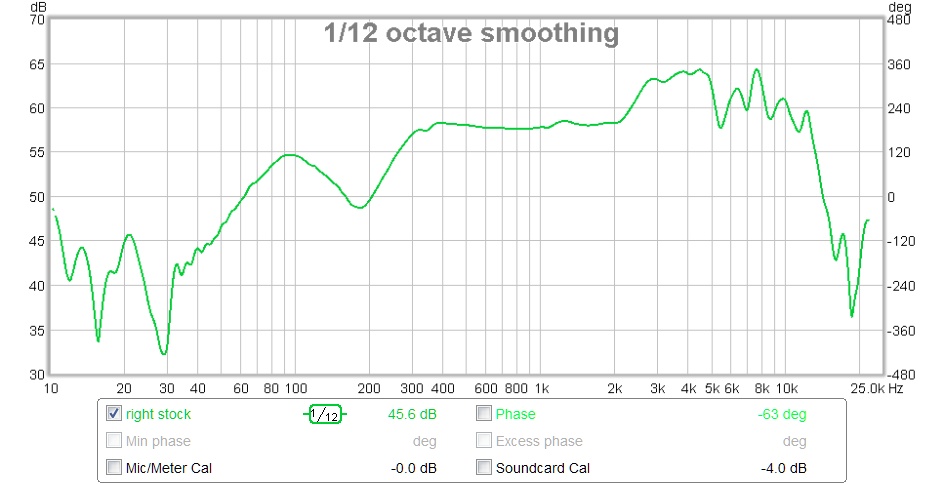 No where near headphone.com's curve, but it follows what I hear. I figure my head isn't like their test dummy's head. My hair is thick and wavy too, so I suppose the cups can't get a good seal and that's why I'm seeing the bass drop like that. Is this a valid measurement? Obviously I can't place the capsule exactly where my ear drum is so there is some discrepancy there. I eq'd the response to flat and I think they sound quite good now.

Does this make sense or am I totally nuts?

You need a speaker (with flat response) playing through the same dummy head as reference.
•••
C

I measured several headphones too, and the frequency response varied wildly depending on my measurement setup. It's really hard.
•••
M

maybe your measure is right, and the way they measure the FR of headphones is flawed?
•••
J

Sure, but it's not so much about reproducibility as much as what the heck the frequency response even means. What kind of response is ideal for headphones after the sound goes reflected through a dummy head?
•••
3

I have done similar tests. Your test is OK. A dummy ear is so that the factory does not have to have a person sitting around all day being used as a dummy for testing. It DOES, as you say, correspond to what you hear. you can flatten the FR with an EQ... works well up to the treble and then it isnt so accurate... but still useful. Equalise it to be flat and see how it sounds... The references given above by jcx are very good basic info.

A useful book on the subject is called... gets into more depth ..... by Harvey Dillon.... Hearing Aids. Thieme publishers. $65 (used) at Amazon.
It will give a more complete appreciation for the hearing and testing issues.

Thanks for the links. I looked through them before but didn't see/pay much attention to the HRTF compensation.
•••

You only get that much bass as in the IF graph if you have perfect seal. When I tested the SRH440 I also felt that there was a strong roll-off below 300 Hz and that they were a bit bright for my liking.
•••
N

xnor said:
You only get that much bass as in the IF graph if you have perfect seal. When I tested the SRH440 I also felt that there was a strong roll-off below 300 Hz and that they were a bit bright for my liking.
Click to expand...