A friend of mine who loves recording classical music put a friend in touch who had a problem with storing his Dad's old Mangers. He'd obviously had his eyes on the Mangers for years . . .

The friend brought the Mangers over and we auditioned them. Polite, flat, subtle are the expressions I understand are used about them, and then I switched over to a pair of Lowthers in front horns using backwards-into-the-corner facing Acoustas for deep bass. . . . My Manger friend could not believe his ears, saying they were the best speakers he'd ever heard . . . instruments jumping out at you in a nice and pleasing way . . .

However, when he went, his son having become fractious at this stage, I tried a little experimenting. Just as people complain of lack of bass with TP1s and simply say "turn up the bass", I turned up the treble on the Mangers and they sounded like the Lowthers . . .

It seems to make nonsense of so called flat frequency responses. Are the measurements wrong or do our ears simply like something different?

Joined 2009
suesskindaudio.de
Our ears are superbly sensitive for frequency response diffences and level differences.
When you did not equalise the two speakers to match that criterions to a certain precission
( say + - 1dB ), a direct comparision is not posible. There are other things that make a good loudspeaker, but this are very basic esentials in a nutshell.
•••
A

normaly they present two worlds ( for mine ears ), maybe because this
was a pair of old Mangers , they needed mor treble , but the newer ones
are okay . I like the Manger more than the Lowthers .

Joined 2006
tnargs.googlepages.com/tnargsound
Flat FR is not the only requirement for good speakers. But it is preferred.
•••

Joined 2009
suesskindaudio.de
Yes, the next most important are low distortion, dynamics and the whole issue of radiation pattern. Phase or time response could fill a book.
••• 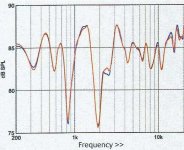 Lowther FR to same scale (if you open it): 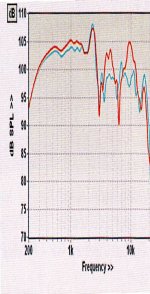 normaly they present two worlds ( for mine ears ), maybe because this
was a pair of old Mangers , they needed mor treble , but the newer ones
are okay . I like the Manger more than the Lowthers .

This is very intriguing! Certainly the Mangers with the treble turned up are very good, but it's shocking to have to apply so much treble control on the amplifier! To what extent is the treble of the newer units better?

Joined 2006
tnargs.googlepages.com/tnargsound
As per the FR posted, the newer ones should not need the treble boosted.

The big issue with the Mangers is the high degree of ripple caused by internal resonances, present at most frequencies but most obvious in the 700Hz-to-4000Hz region, where the ear is at its most sensitive.
•••

Joined 2009
suesskindaudio.de
You get a better handle on the Manger when you measure in the time domain. It has a very fast risetime of 13usec and is phase linear over a wide range. See the step response measurement from the Manger website. The treble response from 1989 on to my knowlage is slightly disfuse field equalised on axis over 10kHz to get the correct treble balance in room. The model for this is the Schoeps MK2S microphone. Older units have a Samaruim Kobald magnet and never ones very strong neodymium tablets to improve sensitivity. When that transition took place i do not know.

Hello,
thats right,
look my measurements with Manger 1991,
a measurement from mr Manger,
look the step response,
one of the best,
less highs are an illusion because the Manger has no
high resonanses whatsoever, look the Waterfall,
a Lowther is with the wizzer cone much more difficult.
basstubamess
here Lowther measurements
http://www.aer-original.com/html/hobby_hifi_01_jan_2002.html

Joined 2001
Paid Member
Here's a curve I obtained from Mangers loaned to me in '04.

Joined 2009
suesskindaudio.de
Mr. Pass measurements look plausible to me.
In the Medea i was able to reduce the energy losses at 800Hz and 1.8kHz by a particular design of the inner structure. The outer drivers gave the front driver pneumatic "push" by a hollow resonator inside resonating at 800Hz and 1.8kHz. I also damped the backwave by an "acoustic swamp" that started with no damping, little damping, more damping and maximum damping along the depth of the cabinet. The Manger membrane is very opaque, so i could reduce the sound that travels back through the membrane from the inside. Mechanically i designed it as a "funnel". The cabinet around the drivers was quite soft and the cabinet got stiffer and stiffer in the back. That way i was able to "evacuate" the mechanical energy because the speed of sound in a stiff structure is higher then in a soft structure. I also used a higher xover frequency then it was usual in those day. I think Daniela went also higher up in her new Studio Monitor.
This compromises "open time" in the Step Response somewhat but sounded more clear and dynamic to me.
•••
P

Joined 2002
There are hints showing that the crossover frequency of the new active Manger monitors is 330Hz. But they don't say what order and filter function they are using now.

In the "old days" it was usually around 150 Hz (varying by some 10 Hz - depending on speaker model) and 3rd order (acoustically - of course).

According to Mrs Manger the "holes" at 800 Hz and 1800 Hz are caused by the inner and outer ports of the diaphragm moving out of phase relative to each other. I didn't measure it but Mrs Manger said that the effect would decrease with increasing listening distance.

Fortunatley the two holes are not disturbing that much.
OTOH I will try to EQ them out a little next spring (when I can do measurements outdoors again).

Joined 2009
suesskindaudio.de
As far as i know Daniela uses Bessel filters and optimises the Step response with physical measurements and not with Simulation.
The crossovers are thus not textbook examples.
•••

i heard the Manger over 10 years,
a least i found that voices sometimes
are sounding with a "shadow" caused by the
Manger "hole" ~1800 Hz.
And in comparison to other fullrage constructions
the sweet spot is to small.
Therefor i constructed the POSAUNE a
double horn with two Manger,
much better soundstage, and the construction
itself, position Manger to Manger, gives a
SPL plus between 1-2 kHz.

Joined 2004
the plan is on Horsts Website , but only for the Mangers .

Hello,
look here and read please, goo..Translate helps
or read the KORNETT.
The POSAUNE is made with Fostex 16 cm, the sound
and function is the same as my other double horns.

Joined 2002
There is a trick to increase the sweet-spot of the Manger which was once presented here somewhere by a German forum member.
You can use a dome tweeter on the back of the box that counteracts the narrowing beamwidth at higher frequencies by the addition of reflected diffuse sound. The tweeter needs to be lower in level than the Manger.
I once made a quick-and-dirty try of this principle with some D260 that were laying around. It basically worked but it would need some fine-tuning. I just used some RC Series circuit in order to reduce the level and keep low frequencies from the tweeter. This is of course not a proper implementation but it served the purpose of satisfying my curiosity quite well.