Local support request for an italian project to show at BA2016

I'm an italian newbie of this great forum.

I'm writing as I'm thinking to partecipate to the next Burning Amp
to show my Switchinglow Project.
This is a sort of evaluation module that allows research, development
and evaluation of a method I'm proposing to use triodes
as true power switching devices in a classic H-bridge Class-D
amp circuit.

The Switchinglow Project is in the form of a kit.
When assembled it is a monophonic amp with analog
input and OTL output.

In order to make a demo, I would like to ask if somebody
local could provide some support to me,
first of all about speakers as it seems
not reasonable to carry them from Italy.

Is there anybody that could be interested to pair this 40W amplifier
with his speakers at the BA ?
High impedance (up to 40..50 ohm) or series connected speakers
are required for the best result.

May I put this question here or will it be better
to move to a
specific loudspeakers threat ?

Bumping this back up to the top...

Can someone please try to help this guy, who is willing to come all the way from Italy to Burning Amp in San Francisco?
•••
M

This is a status update.

First of all, thank you Charlie for the precious help.

Second, I'm in touch now with a guy living not far from Ft. Mason.
He assured me to give all the logistic support there if I'll come to the BA'16, except for the loudspeakers.

So my request is still valid about that.

Third, just to have a look, here is a picture of one of the only two (...for now...) Switchinglow existing EVMs under evaluation in my lab. 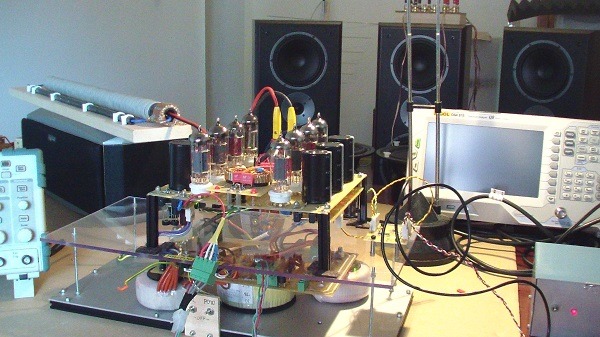 Foreground on top is the triodes half-H bridge, over its power supply unit.
Small board on right is the PWM analog f/e.
On left an home-made ferrite clamp to measure conducted EMI
with the spectrum analyzer, on the right.
Three Magnat Supreme 2002 on the background with a simple h-m
junction box for connecting them in various mode.
•••
M

Here is also a block diagram of the circuit.

It is a classic half-H-bridge with split power supply rails +Vaa, - Vkk.
The switching devices are triodes connected in parallel
to increase output current (as used in OTL amp).
The bridge arms are driven by two Floating Grid Driver circuits.
These blocks provide negative or positive pulses to the grids
according to the PWM streams coming from the modulator block.
Triodes are used as power switches in OFF state (grid negative polarized
respect to its cathode = neglibible plate current) or in ON state
(grid positive polarized respect to the cathode = strong plate current).
The grid positive polarization is no more described in common triodes data sheets.
Nevertheless, it is possible to use it just limiting the grid-cathode current
as in this case the grid-cathode pair works like a direct polarized diode.
The FGDs have to be floated as the cathodes of each arm are not directly
connected to the others.
Further, a simple Signal Integrity method is used to switch the triodes in each arms at the same time.
•••

Looking forward to seeing this! I assume that Charlie Laub, who is running the show this year, will assign this amp to a room with appropriate other components, but I'm not aware of any loudspeakers with such high impedences around..anyone have any ideas?
•••
M

40..50 ohm is not a mandatory load impedance.
It's the upper limit.
A couple of 8 ohm, simple, general purpose loudspeakers
connected in series will work.
Three or four of them will work better.
•••
C

You can certainly find a pair of 8 ohm loudspeakers at the show. Perhaps there will be someone with full-range speakers that are interested in pairing up with you. I think we will know better when the day gets nearer. There will be a thread for people to post "What I am Bringing to Burning Amp" and I will encourage people to post what other equipment they would like to combine their projects with in order to form a working system. Look for that thread soon.
•••

Marco, do not forget that there is 120 volts AC mains here in us, while you have 220-230 VAC in italy, so your power supply will need some modification.
•••
M

Thank you for the gentle reminder.
Every notice is always welcome.

There are many of these 6 inch 8-Ohm Peerless 850397 midwoofers floating around this area, so perhaps a design using 4 per side (32 Ohms) could be developed to accompany Marco's amp?
I volunteer to whip up a 3D model if approved.
Also I have a pair of Vifa D19TD-05-08 3/4inch poly dome tweeters lying around, but they're probably not worthy?

4x 8 Ohm midwoofers can be fine.
My aim is first of all to demonstrate a concept.
Only one side is request as the evaluation kit is monophonic.

Let me know if somebody will be there.

How do you evaluate something that's MONO?!
•••
M

Simply checking one single test signal with some measuring instrument
or
hearing one monophonic source with both ears.

As I wrote, the aim of this evaluation kit is not at all to be a product
ready to plug-&-play.
It is only an hardware platform to show a concept and start developments about a method
of using triodes as power switching devices in H bridge circuits.

P.S.: May be the dual block diagram here over
seems to be related to a stereophonic systems, but it's only due to something
went wrong during the posting of that picture,
as it appears twice ! .....I don't know why......sorry for the inconvenience....
•••
Show hidden low quality content
You must log in or register to reply here.
Share:
Facebook Twitter Reddit Pinterest Tumblr WhatsApp Email Share Link
Top Bottom