Joined 2004
I bought a pair of Krohn Hite units for $100 total.
5800 function generator
4400 Ultra Low Distortion Oscillator
Neither had their fuses, and with new fuses, lights came on but both failed produce a signal.
Easy fix for both though.... the PSU electro caps and all tantalum caps were replaced.....and both came to life.
I bought the user/cal manual for the 5800. I cal'd it and it works well. 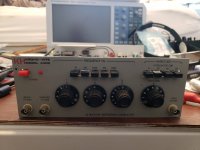 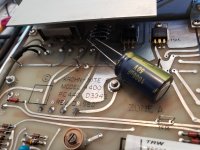 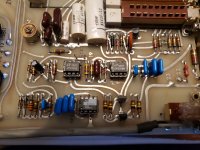 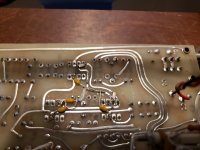 Below, is the entire board, during the cap replacement, but before the 4 opamp swaps (on the left) 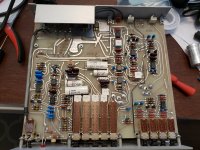 You might be able to see that i swapped to newer opamps, LF13741 AD845, MC1741 OP27. These were chosen from my spare chip collection.
There was an improvement, where the 2&3rd harmonics were now several dB lower.
The only way I can test distortion is using the FFT measurement on my R&S scope.
DC is removed via trimmers on the rear panel...obvious and easy.

redrabbit said:
I cannot find the cal/schematic manual for the 4400.
Click to expand...

Joined 2004
I saw that earlier, but some links (Manuals Plus) produced the same dead-end results as my Goolge search , and another link looked sketchy.
However, just now, I carefully navigated through the " http://www.audio-circuit.dk/index.htm " link, avoiding all the spam-like ads that say "download", and I found the manual for the 4400A.
This manual seems to be the same manual also used for the 4400.
All the "A" suffix means, is there is an extra 50 Ω output. The rest of the unit is the same.
No wonder I could not find it.
Thanks.

Now, I'm working-out how to set-up the best way to measure distortion, and see if my KH 3202 Hi/Low filter can get me a steep notch with this adapter as suggested in the 3202 manual...... 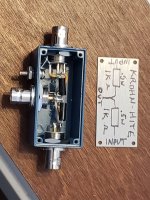 Joined 2003
Paid Member
76MB and too big to print... here's a 9.6MB version that fits US Letter (should re-scale to Euro paper trivially).

Joined 2003
Paid Member
'318 with small cap is a really excellent high-speed amplifier. Don't bet the '5534 is better until you try both.

Joined 2004
Paid Member
The scan you see I made originally. My notes on upgrades are here: https://www.diyaudio.com/community/threads/kh4400a-upgrades.306186/post-5041390 If you are interested I'll go back through my notes on the enhancements. The KH filters are not capable of showing the actual distortion of this oscillator.
•••

Joined 2004
Well it WAS working.......... then the Sine signal suddenly collapsed and disappeared from my scope.

Power supply is still working evenly with the new caps, power light still comes on.
(I took post-mortem DC voltage measurements at all the test points, and those are in the photo below.)
It's not dead, it's just in a coma.
Yes, I was messing with it..... solder-sucking the chips and inserting sockets and trying some NE5534a's...... but I was not touching it when it failed.

I replaced all the old chips in the new sockets, to no avail.
I was not sure if this old board was "through-hole plated", so I made sure to melt solder on both sides of the board at the socket-to-board pin junctions.
I also triple-checked this, checking continuity from all the opamp pins to the actual board traces. And I checked for pin-to-pin shorts.......nothing.
All opamps are getting correct power.
Nothing gets hot.
I went through the troubleshooting guide in the manual. It sorta points to "U153 and associated components".

I'm considering pulling the jFETS and testing them off-board.
But if you look at my notes on the image below...... the frequency buttons want to have either -15v, or +10v, depending on which button is selected.....so it's missing +10v somewhere.....maybe one of the 10v zeners quit working ? 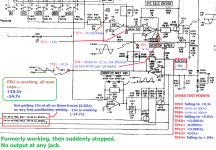 Joined 2009
dalmura.com.au/projects/amplifier.php
Do you have a soundcard and laptop/PC-software for harmonic spectrum acquisition and display?
•••

trobbins said:
Do you have a soundcard and laptop/PC-software for harmonic spectrum acquisition and display?
Click to expand...

No. I have a R&S scope and it has the FFT ability.
I tried probing various parts of the circuit looking for a waveform or any AC voltage at the outputs of every opamp, but could not find any.
Last edited: 2023-01-19 12:11 am
•••

Joined 2009
dalmura.com.au/projects/amplifier.php
The scope is highly likely to have poor dynamic range compared to an ok soundcard. Some of the free spectrum analyser software has exceptional capability. That should allow tweaking and confirmation of harmonic levels in the 10Hz to 90kHz bandwidth, so not extending to your full equipment performance range, but very easy to setup and can be used with the notch.
•••

Joined 2004
Thanks. I do have a good RME soundcard and it's included app ("Totalizer") but no additional analyzer software...yet.
But for now, I'm looking for any signal at all from the KH4400.
•••
1

Joined 2004
Paid Member
Attached is an improved scan of the schematic. Looking at your symptoms I suspect something around U153 is not connecting. The board will have plated through holes but removing parts could damage the board. PCB's have become much sturdier in the last 40 years. I would check continuity from component pin to component pin to spot open traces.

Joined 2004
1audio is always there to help. Much appreciated !!

Joined 2004
It's working again !!
I did not find any circuit breaks/faults, and I'm not exactly sure what fixed it.
All the zeners were good. I did replace about 4 jfets with the same NOS replacements.
I also put in 2 new trimmers, multi-turn type.
I may replace the rear panel DC trim pots with new ones.

While waiting for a few parts, I swapped-out most of the carbon resistors with metal film.
I think this 1979 unit was on drugs..... because early ALL of the old carbon resistors tested high, at almost 20% above what their color-bands stated.

After it began working again (all the old opamps installed), I did exchange most of the output/amp opamps with OPA1611 on adapters.
U125, I used AD8510.
U103 was LM310n voltage follower which has it's pin2 internally connected to it's output (pin6)......so I soldered a jumper connecting these two pins, so that with a regular opamp installed it's wired for unity gain. I assume that was the correct thing to do.

I'm waiting on some parts for a twin-t notch filter project...... so I can't really know any real distortion figures yet.
Click to expand...

Joined 2004
Paid Member
This is the spec for the distortion. Put it in context of when this was designed-1980. Instruments with significantly lower distortion really did not exist. My modified KH4400 measures -115 dB THD+N @ 1KHz 10V with a 30 KHz low pass filter. THD measures -125 (really these are the limits of the Shibasoku 725D). The Victor oscillator is better, but single frequency and limited output voltage. Either is good enough to test audio products at levels far better than known hearing sensitivity.

Joined 2020
Considering the early design date this is really impressive. But nowadays this linearity is in the ballpark of an USB-audio interface with a price tag <200€.
•••