I think we all hear things differently in different pieces of audio equipment like Amplifiers , of coarse it seems like speakers have really night and day differences. I can hear the differences in things like amplifiers but I'll go with that line from some TV show - " It's a Blessing and a Curse " - especially if you don't have much money to spend on really good gear but it can all lead to always wondering if another piece of equipment will make you happier... and always waiting putting off buying being afraid something better might come along - lol , and make me wish I had waited and bought that piece of equipment instead which leads to silly things like being in a holding pattern for way to long, wasting time, and missing great deals on audio as prices continue to climb - LOL - definitely " Audio Nervosas"

- But that is one of the great things about the diy side of the hobby but for some people who hear differences, you can build amplifiers that people have designed .... Also it's more of a matter of choice - I have a friend who hears a lot of the same things that I hear but he can be happy at any level and Audio just isn't a very important hobby for him.... he would rather spend their money on traveling... I had less stress when I realized this and quit trying to get him more into the hobby - lol , lol , lol
•••

xrk971 said:
It's not heresy. You just haven't gotten into amps yet like you are into building horn speakers. I used to think the same thing, but you don't know what you don't know. It's like saying all mid bass drivers are the same etc. Good well designed amps sound similar, but there are differences with low distortion solid state Class AB amps with lots of feedback and higher distortion single ended Class A amps with zero feedback. Soundstage and imaging, smoothness of vocals, and foot tapping dynamics are very noticeable.

Try building a MoFo SE Class A amp - makes about 11W- enough for many of your horn speakers.
Click to expand...

For the third time in my life, I decided to "take the plunge" and get a boutique amplifier.

About 21 years ago I used a Antique Sound Labs tube amp with my JBL two-way speakers, and wasn't really thrilled with the performance. All that the tubes seemed to do was make the bass sound bloated.

About a year later I bought an ASL single ended triode. To me, that sounded quite a bit better, but the lack of power was ridiculous. I used it with the Gedlee Summas that I owned for a while, and the single ended triodes seemed to make the imaging a little bit better. But power output was very low. No dynamics.

At some point, the amp fell off a shelf and that killed it.

A few years back, someone had built a Nelson Pass Aleph clone using switching power supplies from a laptop, and that seemed like an interesting project. I particularly liked the idea that it might be possible to install the amplifier in a car; I've converted home amps into car amps a few times:

With that in mind, I tried looking into singled ended solid state amp kits, but had little success. So I bought a clone of a Pass Aleph 3 off of eBay.

Yes, I know that buying clones is ethically dubious, and I looked into buying "the real thing" used, but had no luck. Here's a review of the Aleph 3 from Stereophile circa 1997: https://www.stereophile.com/solidpoweramps/674/index.html

Keep in mind with this review I'm not an "amplifier guy." I've generally used the same Tripath amps for about 20 years now, because they get the job done and they're not particularly large and they're affordable enough that if they blow up they're easily replaced. I find that Tripath amps are generally quiet, which I appreciate.

The first thing I noticed, with the Aleph 3 clone, is that the "hot" treble of the JBL Studio 530 is no longer annoying. In fact, I ended up using the APO equalizer to boost the top octave of the JBL 530 by about 6dB.

If you look at the measurements you can see the treble is rolled off.

The next "weird" thing about the Aleph 3 clone is that music becomes really distracting. I don't think I've ever experienced this; I actually find myself turning the music off because it's hard to get anything done. The music "sucks you in" with this amp. It's the strangest thing.

Audio magazines have frequently talked about soundstaging where you could locate something "in between" the center and the speaker itself and I've always found this to be completely silly. On my stereos, I can generally perceive a solid center image, and then a soundstage that covers the space between the two speakers, which can sometimes extend past the limits of the speaker, on a good day. But I've never heard a speaker where I can perceive that there's a sound radiating from 15 degrees off axis, or 20 degrees off axis. It's basically:

2) left and right, each at about 30 degrees off axis

But, somehow, this amp seems to put some things in between those locations. Neat.

Without a doubt, one of the most "eye opening" things about this amp is how really minimally processed recordings sound so real. For instance, the "Yeah Yeah Yeahs" have a track called "Maps", and for the first 25 seconds of the song, it's just a recording of the studio, with no processing. It's really surreal how you can get a sense of the "space" of the location, it almost feels 3D. And then when the rest of the song kicks in, that "space" goes away. My assumption is that someone just recorded the first three seconds of the track using a single mic, and for the rest of the track they mixed the various instruments together. Basically the mixing of the tracks destroys the stereo illusion. The sense of "space" in the recording disappears at the 25 second mark, and everything in the mix is strongly panned to left, center, and right, with nothing in between. Even at 128kbps it's obvious:


I'm currently using the Studio 530s in an Ambiophonics setup. The 530s have super narrow vertical beamwidth. If you flip them on their side, they have super narrow horizontal beamwidth, which is nice for an ambio setup. Here's the setup that Princeton used with the Gedlee Nathans:

If you notice a difference in engagement and soundstage and imaging with Aleph, you are starting to see what I mean. There are even better amps and better speaker combinations of course that will be even more amazing. My recent XSD speaker is 91.5dB sensitive and has huge headroom as it uses 8x 6.5in woofers, a PA rated midrange and a thin light planar tweeter above 4500Hz. The soundstage on that plus the level of engagement and visceral bass slam is crazy. It likes low impedance amps SS Class AB amps or Class D. However, some SS SE Class A amps have great damping factor (like Alpha Nirvana). 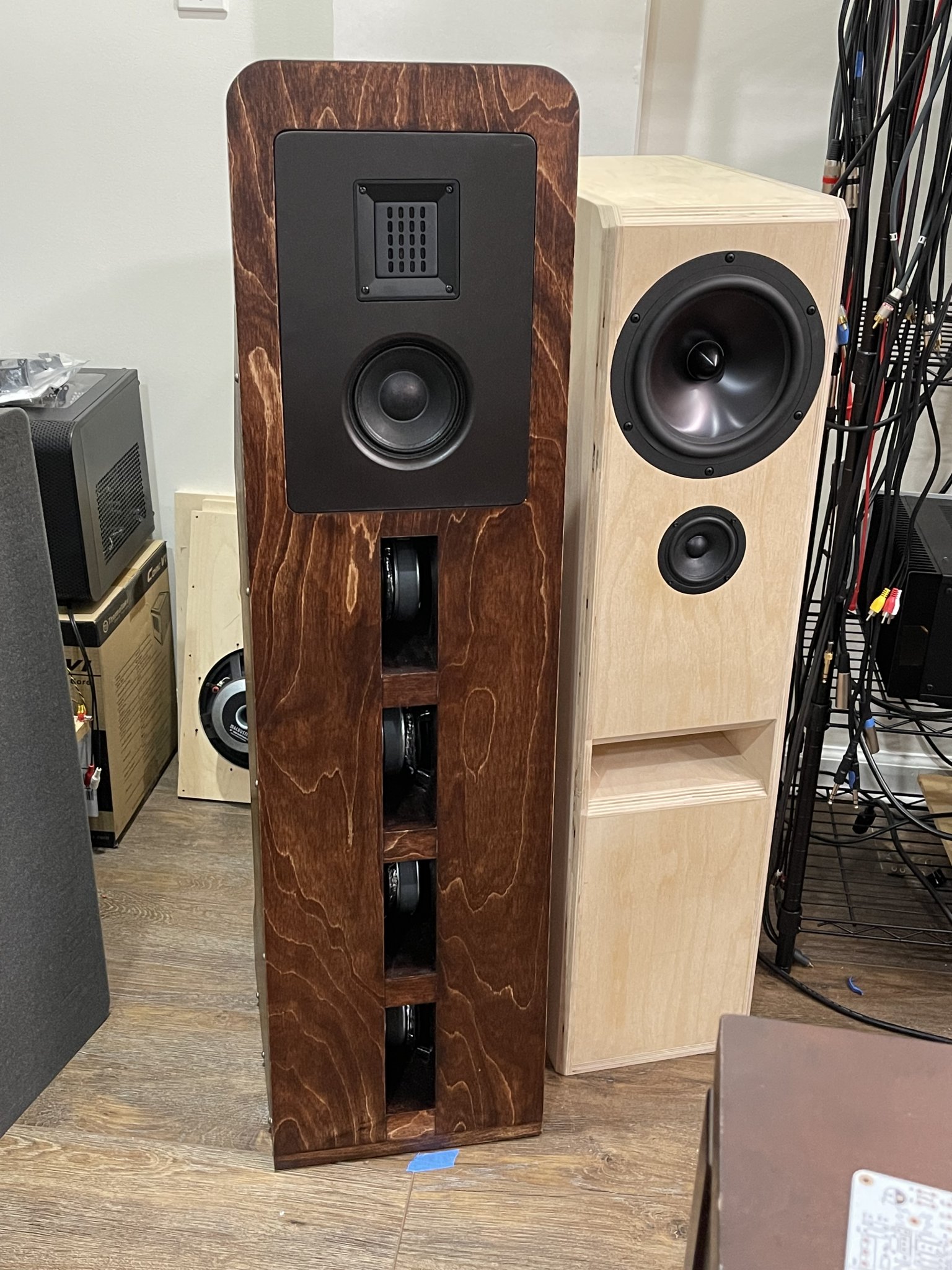 Ironically, this speaker addresses a bunch of issues I'm having with the 530s:

When I measured the 530s in my office, there's a peak of about 10dB at 119Hz! I think what's happening is that sound is radiating into the floor and the ceiling, reflecting, then coming back in-phase at 119Hz.

Simultaneously, there's a dip at 60Hz. Basically the same issue, but manifesting itself as a null, an octave lower.

The floors of my house are laminate on top of concrete, so the surfaces are really speculative.

EDIT: just noticed I have the exact same PC too lol
•••

The 4 port “line array” of dipole woofers seems to have less sensitivity to floor bounce nulls or room mode nulls. The bass is much more uniform as you move throughout the room unlike monopole woofers. I think that’s the one thing about dipole bass is that there are fewer room modes.

same PC? You mean the black cube chassis or the silver HP laptop? The black cube I am actually using as a chassis for a 50W fan cooled single ended Class A amp called the Glass Harmony by Hugh Dean. It uses CPU coolers and the like to dissipate about 150W of heat, so a perfect fit.
•••
P

Patrick Bateman said:
The next "weird" thing about the Aleph 3 clone is that music becomes really distracting. I don't think I've ever experienced this; I actually find myself turning the music off because it's hard to get anything done. The music "sucks you in" with this amp. It's the strangest thing.
Click to expand...

Then again...the real thing seems to be about the engaging as a Yamaha integrated from the 1990s from a sonic perspective.
https://www.audiosciencereview.com/...ds/catalogue-of-blind-tests.8675/#post-217462

Tripath is an older Class D tech, so it's always possible your Tripath amps had some FR changes due to interaction with the speakers driven. The Pass amp designs seem to be higher distortion but as seen above they're good enough to be transparent for the most part. (It seems some of the Pass designs are seem to be worse than others - see Stereophile review of one that hummed and buzzed - and the author still praised it amazingly enough!)