Isobaric sub based on Pyle PLPW15d

Joined 2007
Paid Member
I mainly made this document for my own records but I think the design is a good way of getting decent output from cheap high Qts car subwoofer drivers. The measured maximum output is >115dB/1m @ 30Hz.

I'd take a closer look at that Hornresp sim. As it does not take losses into account, it should be predicting more, not less, output at very low frequencies (e.g. at 30 Hz, where the measurement seems to be 6dB higher than the Hornresp sim).
•••

Joined 2007
Paid Member
At 30hz all the different measurement methods pretty much match, it's higher in frequency where the real world measurement methods show increased efficiency. What the simulation doesn't take I to account though is the acoustic path length from the front to the back of the driver and the directivity of the speaker due to the front baffle dimensions. I performed some baffle simulations and also a simulation of the speaker as a stepped tapped horn and am reasonably satisfied that these two effects are what I'm seeing.
•••

Joined 2007
diysubwoofers.org
If I'm reading this graph correctly, the Hornresp sim is 6dB below the actual measurement at 30 Hz. If you adjusted the relative levels to "line up the curves", the position of the Hornresp sim is still questionable because the sim does not include the impact of losses, which will always result in the measured 2PI response always being less than what the sim predicts at low frequencies.

Joined 2007
Paid Member
I read that as the Hornresp sim the same as the outdoor 2m ground plane sim(It has been adjusted to 1m distance) at 30Hz and the room compensated measurement and inbox measurement about 2dB above the simulation. A UMIK-1 with calibration and REW was used to get these measurements, so all apart from the InBox measurement did not require adjustment of levels for anything apart from drive voltage or distance. I don't have a microphone calibrator so cannot for certain tell you the microphone is working correctly but it has previously produced results I would expect. There are some more details of the measurement procedures and how (with help) I became satisfied that I understood the results I got:
Internal microphone to determine maximum SPL - Bass Gear - Data-Bass Forums
If you where looking for the most accurate representation of its performance in a typical domestic sized room I would use the 'room compensated' response which has no directivity effects. The inbox method is limited by the frequencies below which the pressure distribution is no longer uniform, from memory this is ~60Hz.
•••

Joined 2007
diysubwoofers.org
Oops, my mistake - the difference I was referring to is happening at 20 Hz, not 30 Hz. But the reason is the same - the Hornresp sim'd response should be higher than the measured response at 2.83V/1M (2PI), due to the effect of losses that are not accounted for in the Hornresp sim. If the sim is significantly lower in level (6dB in this case), then that suggests that one of the steps in the process needs to be reviewed.
•••

Joined 2007
Paid Member
Ah I see! The outdoor measurements where done in a pretty cluttered yard there's some reflections or boundary reinforcement down that low. Best I can do unfortunately. The other methods are closer but they are also subject to more error.
•••

Joined 2007
Paid Member
First gig done with four of this box driven from a P7000s in stereo mode with two subs per channel in a sort of warehouse style space (very large lossy room about 100 people). Subs performed remarkably well, where just enough for the party. For bands (heavy jazz funk) some peak limiting on the kick drum but not deleterious. For DJs mostly not limiting apart from very bass heavy passages. Lots of compliments on the sound and the extra depth compared to conventional sub setups was very noticeable. I checked the exposed driver temperature after a few hours and they where luke warm to the touch, no noticeable bass fade through the night, no driver failures.

Probably going to build a similar design around a single higher end driver in a few months to compare performance.

What do u think about the RCF lf15g401 for this enclosure?

Joined 2007
Paid Member
That driver looks great, it has a much stronger motor so you can probably use just one driver per box. I think when I was shopping around for stronger 15" drivers the RCF looked to be ammong the best, the xmax spec is a bit understated as they use a more conservative formula than some to define it based on geometry and the top plate is thicker which reduces geometric coil overhang (but is in practice as long as magnetic field is maintained in the gap is a good thing). (I got some 15TBX100 instead as I got a very good deal on them)

If you just fit the magnet facing out driver then there is no need to make an access hatch in the bottom as well. (omit the hole in panel C and don't make panel D). I will be able to upload the sketchup file and hornresp file in a few hours so that should help you if you want to build this.

Joined 2007
Paid Member
Hornresp record (with pyle driver) and sketchup 2017 model of the box attached. Also did a quick sim with a single RCF driver and it looks fine. Voltages are 2.83V on the RCF and 4V on the Pyle for standard 1W/1M. Even with this the single RCF driver is more sensitive than the isobaric pair of pyle drivers.

Joined 2018
thanks for the informative answer.


sketchup would be much appreciated


so many intresting designs out there, and such a hard decision which one to build.


yeah the pa will be my winter project, lets hope that next year all those sad speakers in lockdown, will get more more playtime

Any warnings? I’ve considered this alignment w/a different driver in a smaller closure for HT use

Joined 2007
Paid Member
It mostly behaves as a ported box with a bit more output in the upper bass, the isobaric mounting is to overcome the weak motor force of the car audio drivers. So beyond the usual considerations of ported boxes no warnings needed.
•••
B

Joined 2019
I have something similar, I simmed it as a single on the right in BP parallel6, and the isobaric on the left using compound horn. I have both at Xmax (off by one a tiny bit favoring the isobaric input power on accident...).

It seems consistent with the assumption the amp will allow the parallel wiring of the isobaric?

Joined 2007
Paid Member
How much more output can you get with a single quality driver like the B&C 15TBX100 compared to the isobaric Pyle PLPW15D? Hornresp says the the box should be xmax limited resulting in around 3dB advantage in maximum output to the 15TBX100, however as a linear simulation it's no substitute for real world testing.

Using a dynamic microphone (XM8500) and my audio interface turned all the way down it's posible to capture the relative response of the two options allowing for indoor testing (yes my house seems to have survived...). A bridged Yamaha P7000S was used as the test amp which can reach 180-200Vrms so should not be clipping with the (worst case) single 8ohm load. The 15TBX100 just about fits but will need a new grill/driver cover, if I decide to go this route also the access hatch can be pemenantly closed. 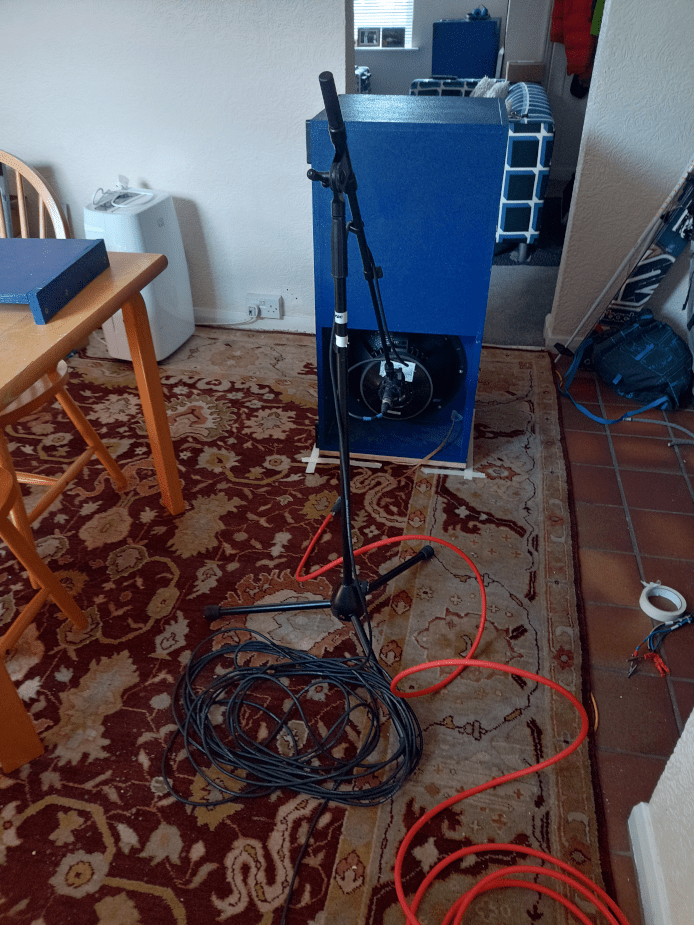 The 15TBX100 is 8ohm nominal and the isobaric PLPW15D wired as 16ohm so we would expect at least 3dB gain in for the 15TBX100. Mostly we see more than this, around tune ~28Hz due to the more powerful motor and above 50Hz I think due to the lower inductance motor design. I think the dip at 170Hz is something to do with the absence of the driver cover.

Maximum sweep level compression:
-5dBFs was the maximum level achived with the 15TBX100 (107Vrms) before I felt that the driver was limiting over much of its range while for the PLPW15D pair this was at -3dBFs (134Vrms).

*Note ignore the dip below ~32Hz this is due to performing trace arithmatic on a trace starting at 20Hz and a trace starting at 30Hz.
The PLPW15D is displaying more <80Hz compression while the 15TBX100 displays more compression above this, however the 15TBX100 also has way more output in the upper bass so is doing more useful 'work'. Both drivers have compressed more than 3dB so it would be sensible to peak limit them at 107Vrms (15TBX100) and 134Vrms PLPW15D as very little more output is posible. With the lower required voltage for maximum output the 15TBX100 is a better match for the P7000s in stereo mode (~100Vrms max output).

Comparing the two highest level sweeps we see that over most of the range excluding (35hz - 50Hz) the 15TBX100 is displaying more than 3dB maximum output increase. Interestingly this range is where the excursion of the driver is maximum so perhaps the difference in excursion capability between the two drivers is less than I estimated. For whether this upgrade is worthwhile it would depend on usage, for live bands ETC with mostly >50Hz content the 15TBX100 is effectivly halving the number of subs required but for dance music with a lot of 40Hz the gain is much smaller. However its worth taking into acount that the 15TBX100 presumably will also suffer from far less thermal compression due to the larger voice coil diameter, improved cooling and geater efficency. I paid around £35 per driver for the PLP15WD, £70 per box, while the 15TBX100 is around £230 a driver (I paid £100 each for the two I have but this is ebay luck). Based on these results I will upgrade all four subs to the 15TBX100.
••• 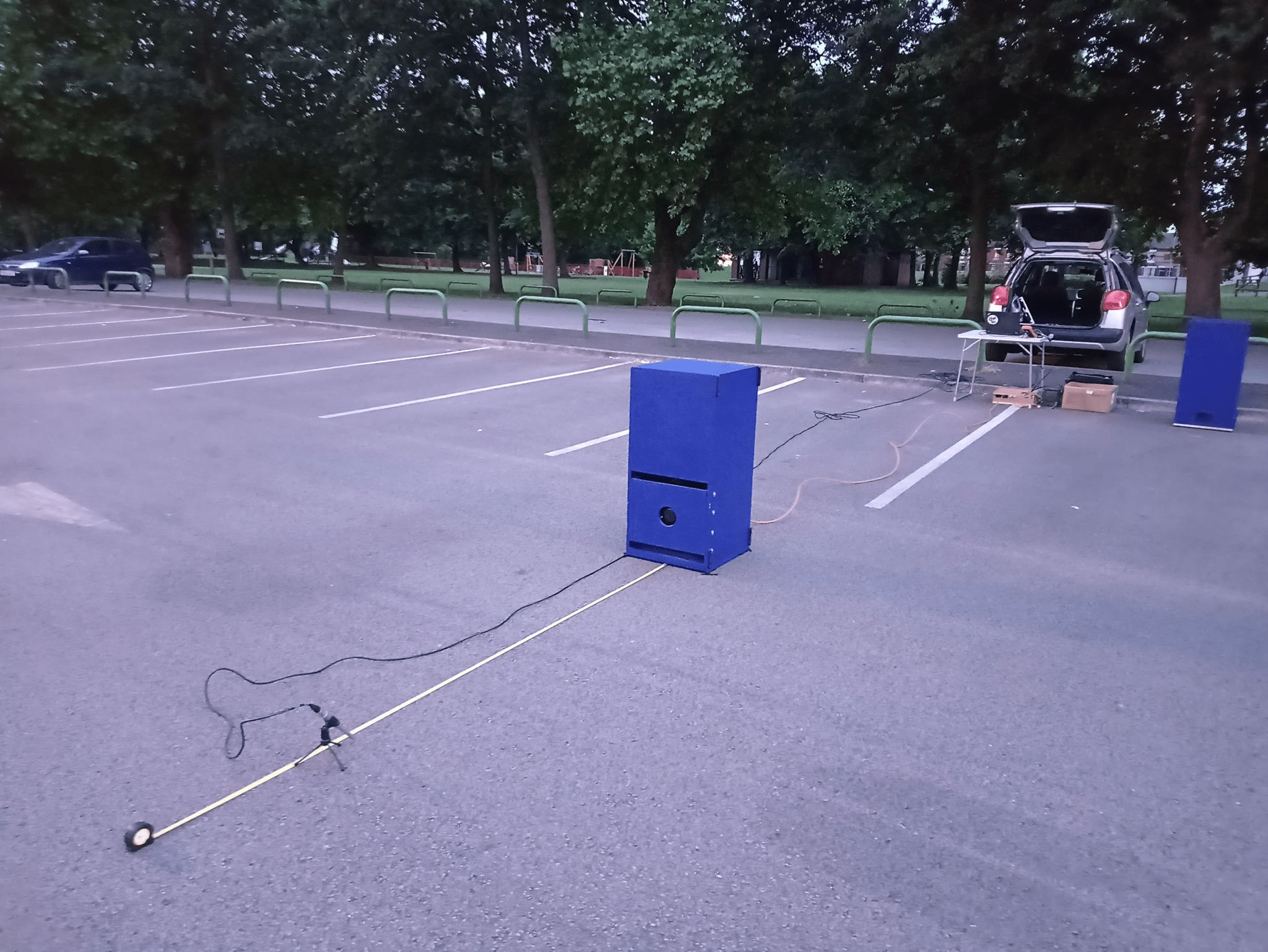 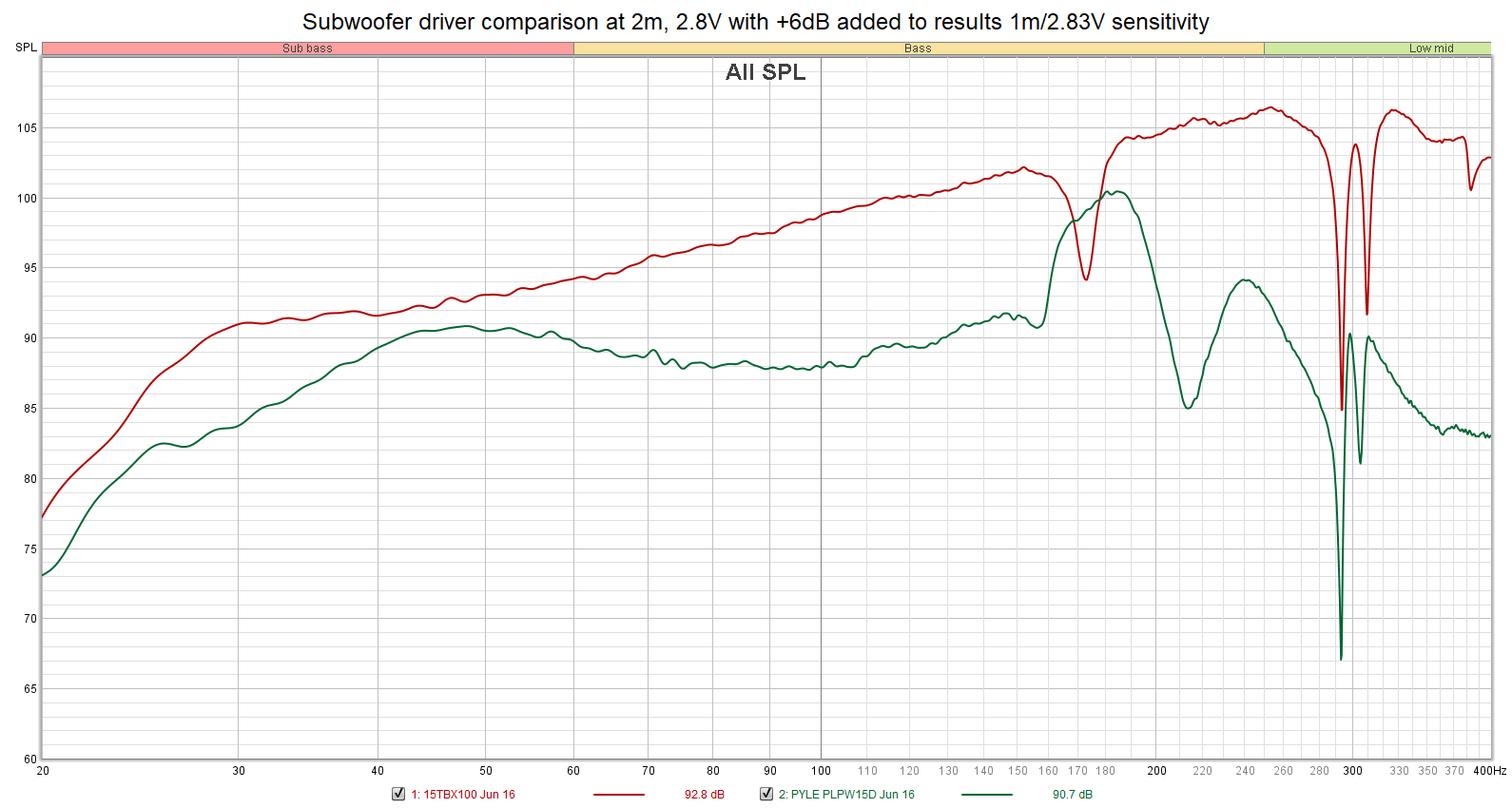 Its worth pointing out the B&C is an 8ohm nominal driver and the Pyle a 16ohm isobaric pair. The Pyle also has the driver cover in place which I belive causes the unusual response beyond 160Hz. From this we can see that much of the gain over the Hornresp simulation that Brian Steele pointed out was indeed caused by reflections in the yard enviroment where I took my original measurments. We can also replot our voltage sensitivity gain using these outdoor measurments to compare to the indoor measurments I made: 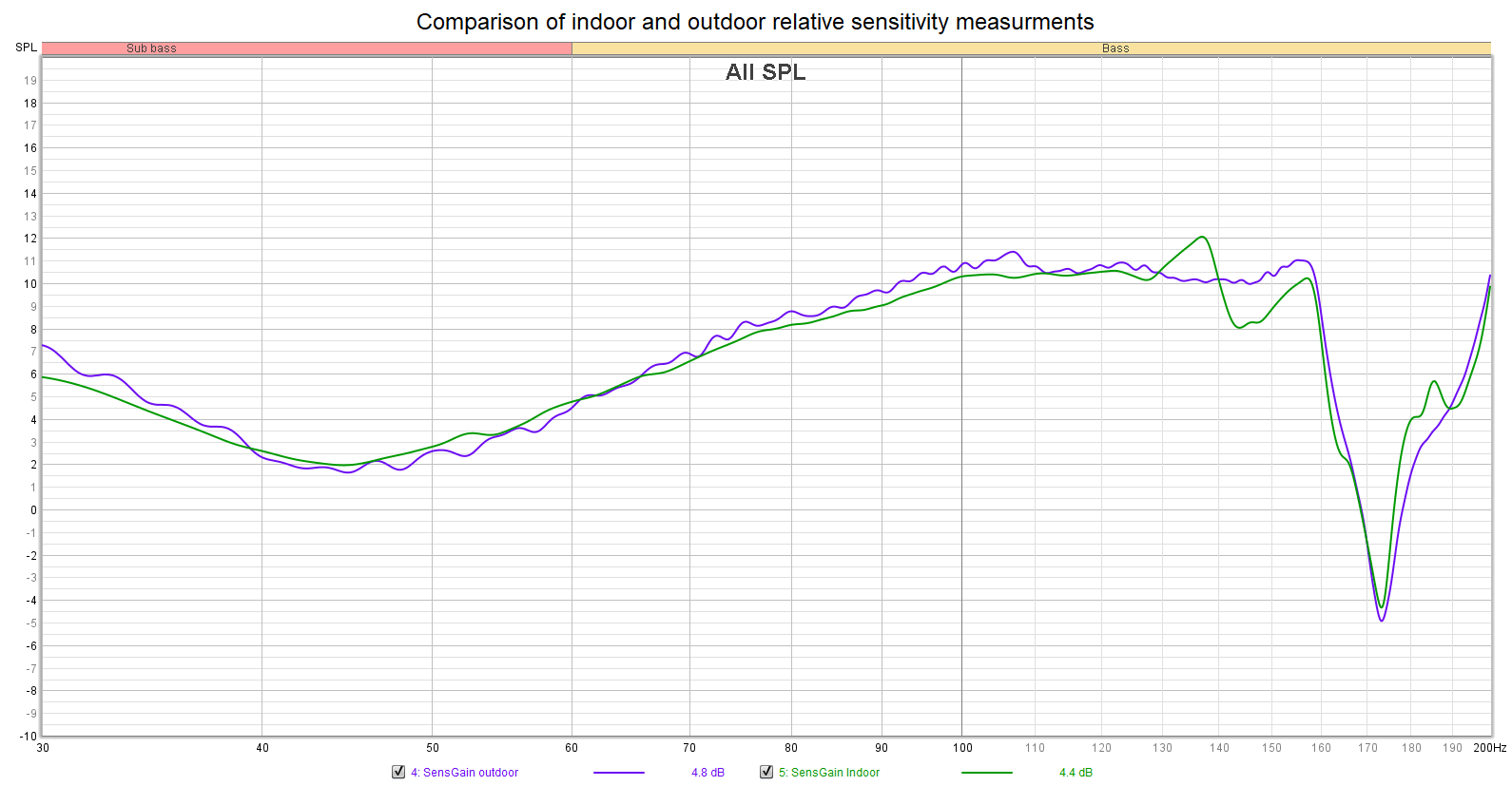 They are very simlar indicating that the compression results I would struggle to take outdoors (as I'm usualy in a mad hurry at a festival if I have a sub and a generator and a large amp all at the same time) should be reliable.


We can define simple EQ to flatten the 15TBX100 version:

and a new EQ for the PYLE isobaric version: