I need help on a Simple guitar/vocal pre amp.

I want to try to build a simple preamp i can use for vocals and guitar as a first project. I have no idea where to start I'm looking to use something in the 12ax7/12au7 family. Any help would be appreciated Thank you.
•••

I suppose you're looking for a kit for this - I must admit I'd build it on tagboard, enabling you to modify things later.
Are you intending to have one input which can take either microphone or instrument? Or be able to use the two simultaneously? (mixing preamp)

There are some differences between a mic and an instrument input stage; the guitar input wants as high an input impedance as practical (easy with tubes while, for me the mic input wants an input transformer with a low impedance balanced input (with a break jack for a high impedance mic in case it's required) and variable gain. Equalisers (tone controls) tend to be different, to; the instrument input tends to be flat with the pots "flat out", with massive attenuation at chosen bands, the mic input flat with the pots in centre position with a fixed gain/ attenuation (typically plus or minus fifteen or eighteen dBs)

What was the output of the preamp intended to drive? Tube outputs are typically high impedance (or at least low current drive), although this is easy enough to compensate for.

Any of these details is easy enough to allow for if you are working from scratch; a nice little power supply (stabilised 12 volts, or six if you're intending to experiment with different tubes in the future, and +120 - 160 volts plate voltage), a chassis with a few more b9a socket holes punched than you expect to use, a face plate with the input sockets and controls, tagboard neatly mounted (if possible not blocking access to the sockets), and you can experiment with a minimum of risk; it's almost impossible to make it sound really bad (lots of munufacturers tried, back in the sixties) if the tube's within published conditions, though it may get a little noisy.
•••
R

I want to start out with one just for guitar. I'm wanting to use the output to go into a solid state amp. It would have only one channel and i would want it to be as simple as possible seeing as i have no experience with this what so ever. I do have all the sockets i would need from some broken amps and a few transformers from a Hammond amp out of an m3 but i doubt those would be useful.
•••

Redfoxfur said:
I want to start out with one just for guitar. I'm wanting to use the output to go into a solid state amp. It would have only one channel and i would want it to be as simple as possible seeing as i have no experience with this what so ever. I do have all the sockets i would need from some broken amps and a few transformers from a Hammond amp out of an m3 but i doubt those would be useful.
Click to expand...

Google for Fender and Marshall; they were using tubes like you like with own timbre stacks. You may cut a pre from any of their amps for your own taste. Breadboard, try, and if you like build it.
It is simple!

As he says - simple. See all the schematics at:

Find your favorite, and simply just use the preamp section.

This is my first project doing anything like this at all really. Im looking for a step by step and a list of parts i need. i feel really stupid not knowing what im doing lol.

If theres any site anyone knows of like this or can explain themselves that would be great.
•••
D

There is a forum at ax84.com that will help with the modifications required to get what you need.
••• 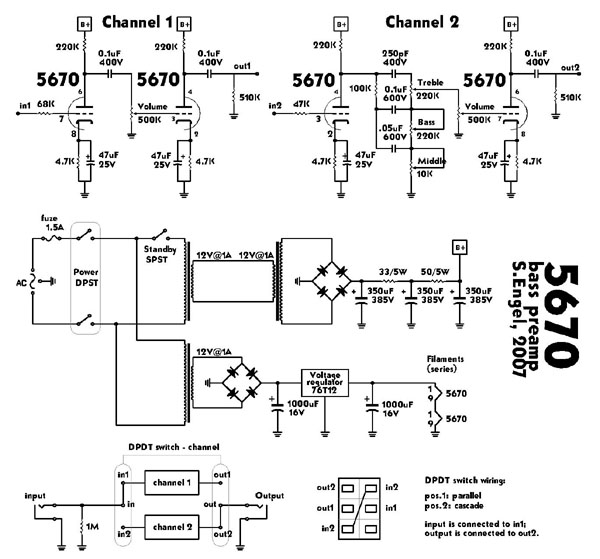 I have the amp out of a Hammond m3, I think its an AO-29. I'm gonna use the sockets out of it, and maybe the chassis for a later project. i believe the transformers are still good. does anyone know anything bout the transformers they put in these things?
they don't say anything on them that i can see but they are pretty dirty. Im wondering if i can use any for the preamp instead of buying a new one.
•••

what tubes was the amp using?

in any case I'd not waste those transformers for a preamp because if that's from a power amplifier it must be capable of much more than needed for a preamp with one or two tubes. My suggestion is - again - two small and cheap trannies. Or - if you wish - buy one 6V tranny for heaters and one 110:220 converter for HT - but make sure it's not an autotransformer.
•••
R

Do you have any suggestions on where to find the transformers and other parts?
•••
D

Add Antique Electronic Supply to the list as well: