How to create +/- DC from a single transformer output without center tap?

I have a good r-core transform with single output of 36V without center tap. What is the best way to split the rail to create regulated +/- 12-15V DC for at least 1A? I see some designs of virtual ground but not sure any one can handle bigger current.
•••
E

Can anyone comment on this design, will it work to do full-wave split rail? 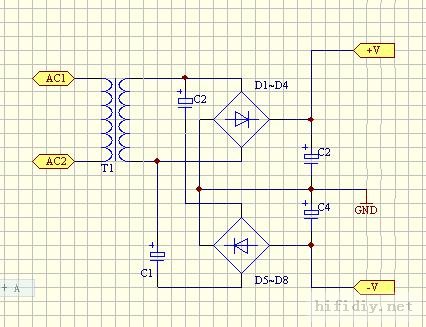 Hi,
Try typing 'rail splitter' your search engine and see what it brings you. C1+C2 are not needed in your design, C3 + C4 need to be chosen to have a working DC voltage greater than the voltage on either rail and to have sufficient charge holding capacity (depends on what you finally intend using the supply for).
Also you have parallelled the two bridge rectifiers together so if you want to have two dual supplies then this design will not do, you need to seperate the two rectifiers then tap two live/neutral cables from the transformer. One cables live/neutral will go to the '~ ~' symbols on the one rectifier and then your circuit '+ -' will come from the '+ -' on the rectifier. Then you do the same with the other rectifier (I hope you are following me). Next you put in your reservoir capacitors (c3 + c4 in your drawing) and the centre point of these is your circuit ground and the top of one capacitor is positive and the bottom of the other is negative.
You could then add bleeder resistors across the reservoir caps (if it is to be of high current/voltage) and even some form of regulation if you need/want it, and also some bypass caps for the main reservoirs to aid charging and discharging.
I hope this helps (and doesn't confuse)

Thanks for the reply. I think C1 and C2 is necessary, otherwise the diodes in two bridges essentially short the transformer. Even this design (I got it from some forum) I still have doubts. Most common design I see working is the half-wave rail split, which is similar to the voltage doubler. But are there any way to achieve full-wave rectifier without center tap in transformer second winding?
•••

You can make an inverting switching regulator, see part LT1071CT

You could make two half waves rectifiers.

In case you might mainly be seeking balance in the positive and negative outputs, consider adding two more capacitors. Each AC input node of both of your bridge rectifiers would have the same capacitor supplying it with AC. Watch electrolytic capacitor polarities, though.
•••
E

Yea, a voltage doubler. Only thing is that your transformer voltage has to be lower than (1/2) of what your max voltage is.

In your application, One AC leg of the transformer and GND is at the center connection of the caps, and you get your split voltages from the two caps, no resistor dividers needed.
•••
H

The jumper in the drawing supplied by EWorkshop1708 must be installed unless the load current on each supply is identical. Ignore the 120/220V note.

If you ground the center of the two capacitors, then the output voltage will be equal to the winding voltage like a standard bridge design. i.e. a 12VAC winding will produce about + and - 17VDC minus the 2 times the diode drop (12VAC RMS times 1.414 = 16.9VDC - .6 - .6 = or +/-15.7VDC). EWorkshop1708 is referring to the peak to peak positive and negative when he says the output will be twice the transformer rating

Remember the diodes must be rated at least 2 X output voltage.
•••
E

or, go for a discrete virtual ground like Sijose did.
•••
E

The other way would be to get a different transformer.

Since the transformer is an AC device, it doesn't matter what you make into the ground for your isolated project.
•••

Hi,
Do you mean the primary when you say AC line ? And the secondary for the centre-tap ?

The best way is to use a different transformer. 36VAC will give you about 50V DC after the rectifier. You could of course set up a virtual ground, but you'd still have +- 25V where you want +-15 max regulated, so you'd convert 20V * Iout into heat at least.

The simple way to get +- without center tap or virtual ground, using two half-wave rectifiers (i.e. 2 single diodes) in this case would get you some +-50V = 100V total, far too much.