So the HK A500 that I had previously I handed off to a friend of mine, as I picked another one up! This one previously had some of the power supply caps replaced but the film resistors inside were...well..unfortunately in-tact.

Unit was functioning but had a picky A-chan on the phono (much like my last one did). So I replaced all the caps and resistors and got that functional.
I noticed that the cap or resistor (or both) for the hi channel was not happy so I removed that. I've got a MM setup and don't think I'll ever go to MC. If I do, I can just add the resistor/cap back in.

Resistors were film 1/2W, caps were 1kv vishay ceramic, coupling caps were 400V Cornell film, the Rk,bypass is a Sprauge tantalum (this will be true for all the parts I replace as well).

After getting it all back together, I noticed that the "low cut" circuit was malfunctioning. As some of you may not know, HK used a lot of "package" components and these were going to get ripped out. In my last one the only control that I used was the "contour" function. Figured this may as well be the time to remove the rest of it.

So at this point I've got no low-cut. R15/R50 and its capacitor go from the wiper of the vol pot to the grid of V3. Additionally I removed R16/R51. I've also got no hi-cut. The output coupling cap is tied directly to the local feedback network that also controls the "blend" function. I do still use the blend on some of the older mono records I have so I'm leaving it in.

At the same time, I removed the tape monitor in/out and also removed the stereo nor/rev switch. I'll also not use a tape head ever, so I removed both the input wiring, and the R89/R90 in the RIAA feedback loop.

After doing all of this, I almost had a working amp. B-chan was dead. A-chan sounded fantastic though! I noticed that the "blend" control did nothing so I figured that my issue was post-blend. Used a jumper to bypass the tone control and I got an output out of it (albeit anemic). I contributed the lackluster tone to having no shaping (bypassing the tone control). As an experiment I jumped the A-chan tone output over to the B-chan. Success! Equal tonality out of both. Prior to pulling all of this apart I already had tested the output stage so I *knew* it was okay but just wanted to re-confirm.

So now, I've got to replace the "all in one" package for the tonestack with some discrete components. I figured this was as good a chance as any to properly re-do this thing. While the components were still original or older style, it was clear someone had been in here and some of the soldering was....lacking.

So here we go, going to be a few topology changes. HT rail and layout will stay original but PI will be re-worked a bit and so will the Power amp.

From the rear to the selection switch, I'll have the MM phono input and the three "aux" inputs (tuner, tape amp, aux).

Phono stage topology will stay the same. As previously noted, R59/R60 will be removed. Resistors and caps will be replaced and layout of components improved to be a bit less....kleudgy (that's going to be a theme). Phono VV will remain at 170-180 as original. 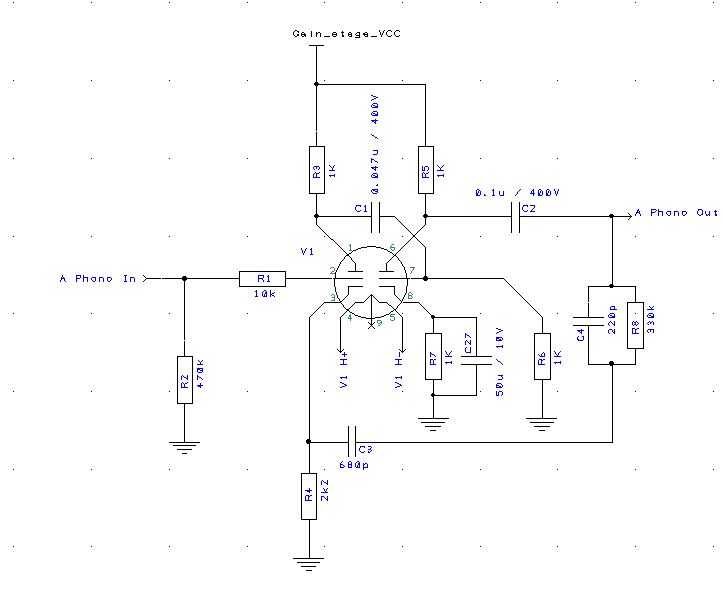 This then gets passed to the input stage. I'll be leaving the contour control in. Capacitor and resistors will be replaced. The first gain stage topology will remain the same. Again, replacing resistors, caps and making the layout less horrible. Gain stage VCC will remain at 315-320 as original. Now for the PI. This is where things get changed a bit. The "ambiance" output will be removed so anything to do with that is getting gutted. Basically I just cleaned it up a bit in the process. PI VCC will be 340V for both stages. 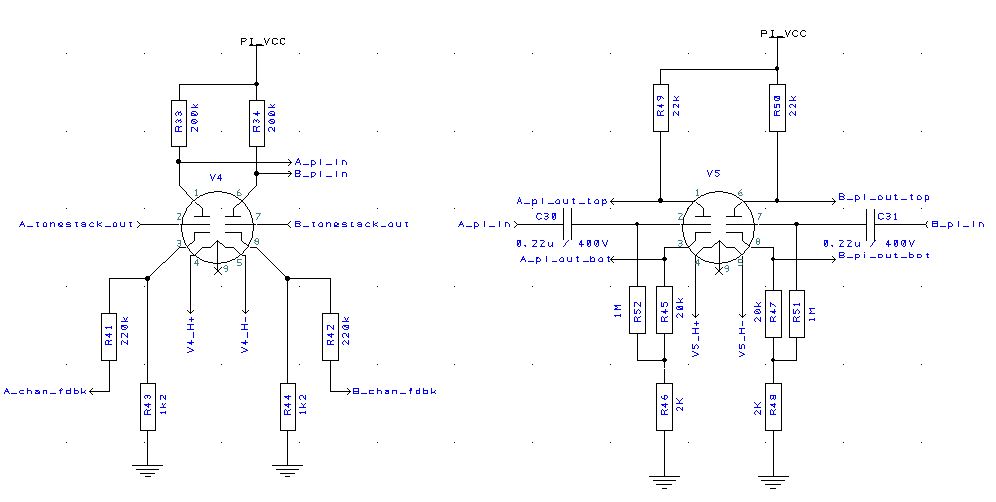 Now the output stage. First of all, I'll be re-biasing for EL34's instead of the 7355's that came in it originally. I'll also be removing the filament elements for the bias and create a negative rail for the cathode bias. I believe the pinouts that I have for these are incorrect as they were for the 7355's and not the EL34's. I'll get that changed here tonight and update accordingly. Output VCC would be provided with a 9k2 / 5W resistor tied to 370V. 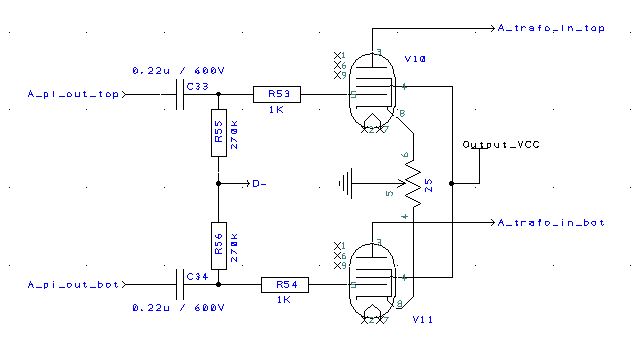 For the power supply changes now...I don't have the schemes for these yet but I'll try to get them uploaded tonight. I've got two options for the heaters:

1) the 6.3V rail might have enough left in it to provide the additional 1.2A required for V1, V2, and V3. Ideally I would do this as its less wiring, less components. I'm not 100% if it has the capability and I don't know if I'd risk saturating the PT with loading the 6.3 rail too hard.

The third rail I'll have to create no matter what. I'll pull a source from somewhere and created a -18V rail regulated with an LM317 for the (D-) fixed cathode bias.

Again, sorry for the lack of the PSU schemes yet but I'll try to get them up over the weekend. Additionally, this is my only real area of concern so if one of you smart fellers has a recommendation I'll be all ears. Attached you'll find a full length of one channel so show how it all connects together. At some point here I'll get a BOM all put together as well for an estimate on price...etc.