I have decided to build a TPA3118 amplifier for a school electronics project. For this project I have to go though the process of testing, So to start with I decided to build the circuit on a breadboard. I built the circuit and it worked when I pinched the OUTNR connection. When I did not have my finger on the speaker output the amplifier would turn on for about a second and off for about a second. It was also not very loud. After about a minute it just died. [emoji22]. I was powering from a 12v 2a wallwart and using the schematic from the data sheet. http://www.ti.com/general/docs/lit/getliterature.tsp?baseLiteratureNumber=slos708&fileType=pdf
I have rebuilt it about three times all to no avail. Am I missing something? Or have I blown my chip up? I have a basic knowledge of electronics but am a bit of a noob when it comes to amplifiers.

Other things I am not sure about:
Should the sync pin be connected anywhere when there is only one chip used? At the moment it is not connected.

Should SD_LR be connected anywhere?

Do the input pins have to have a 1uf capacitor? as I do not have any at the moment and have tried using 2.2uf and 0.1uf capacitors.

Sorry if these are question that are very basic or commonly asked. I had a quick look for the TPA3116 thread but it is so big I don't know where to start. 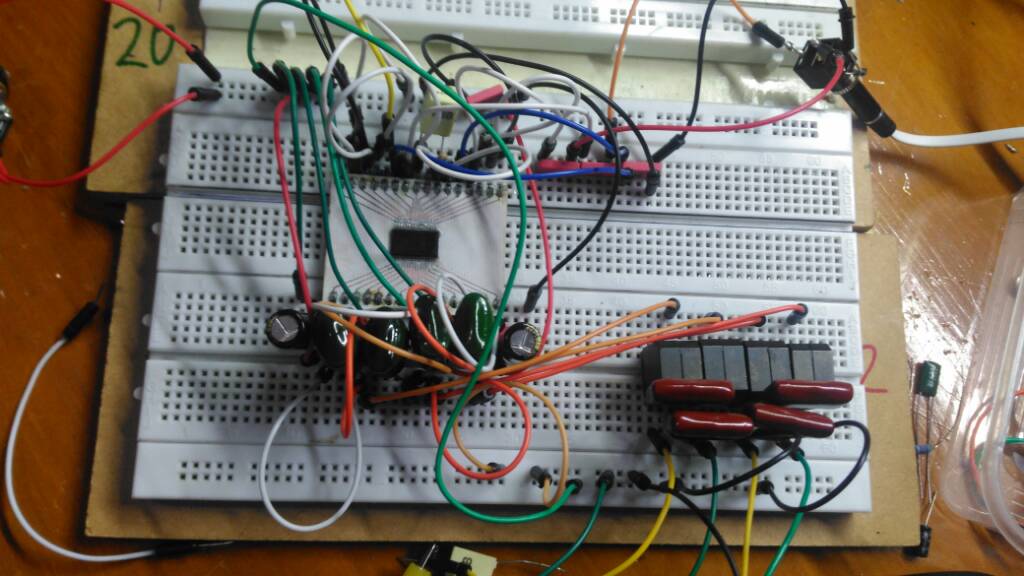 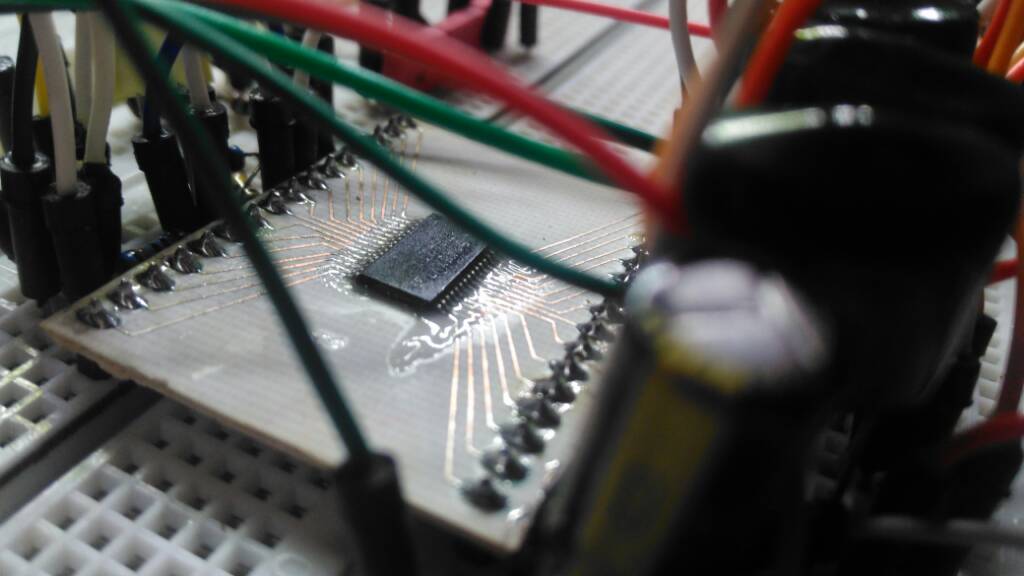 Would guess, it's blown up due to so many parasitics/stray coming from wires/distance. You'll need to tighten it up with some parts on the pcb right beside the chip, especially switching parts like bootstrap caps, output snubbers, local decoupling for PVCC without bulk capacitor. Then sort your wires to function groups and keep all the switching away from audio signals and analog voltages.

Have you tried to power up the IC with inputs grounded? (With coupling caps still in between)
•••
M

Check out this thread, Cheap TPA3118D2 boards, modding them and everything that comes with it. xrk971 did a "dead bug" version of the tpa3118 amp, somewhat similar to what you are doing. The first half (or so) of that thread talks about his dead bug amp, and lots of other forum members contributed helpful feedback, much of it is relevant to what you are doing. (And it's a little more accessible than the huge tpa3116 thread.)

I would also try to simplify: in particular, you can run this amp in PBTL mode, which effectively means mono (one channel only). An example PBTL circuit is shown in the datasheet. It's a simpler circuit, as it uses fewer components (approximately half), which I think will make your job easier. If you get that right, then you can go on to mod it into BTL (stereo) mode.

In your top picture, in the lower right, I see those four inductors and film caps. I assume this is your output filter. This isn't technically needed for the amp to function correctly, the function is to filter out the high-frequency switching noise from the amplifier. This is to prevent EMI pollution. The datasheet says that if your speaker cable length is fairly short (30cm or less IIRC), you can get away with simple ferrite beads for the output filter. Your output filter probably isn't the problem, but I think at this point the goal is to simplify.

If you have indeed killed that tpa3118 chip, you might also try with the tpa3110, which is a close relative of the tpa3118/6. It can also be run in PBTL mode, and has fewer pins (only two or four fewer IIRC). Not a dramatically simpler, but slightly simpler. I think the tpa3110 is similar enough to the tpa3118/6 that a lot of the info for one applies to the other.

For the input pins: the purpose of the (series) capacitors is to block any DC that might be riding along with your input signal. Depending on your gain setting, a too-small capacitor value could cut off some of the lower frequencies. But again, your goal is not fidelity but an academic exercise, so 1uF should be fine.

Just general tips, as I too am in the "early learning" stage.

One more thought, though this is a guess and may be irrelevant: you might benefit from using a lower voltage power supply. IIRC the tpa311x only needs 5V or so to turn on, so maybe go with with 6 or 7 Volts? I.e., enough to be certain the chip will turn on; but my gut says less power is better when you're in pure testing/debug mode.
•••
M

One more random thought: check out the "lunch money amp" thread. This is a completely different chip amp, the tda7297, (not even class D), but its basic implementation is extremely simple. You can buy the chip for $5 or so, and components for the most basic circuit should be under $10.

Just make sure you connect signal ground and power ground, or the chip won't turn on.

You can buy a pre-built amplifier with that tda7297 chip from China for $6 or so (hence the name "lunch money amp"), just to get an example implementation.
•••
T

Thanks for all your help.

Have you tried to power up the IC with inputs grounded? (With coupling caps still in between)
Click to expand...

What do you mean the inputs grounded? I just connected INPR and INPL to ground through the capacitor and it still nothing?

I would also try to simplify: in particular, you can run this amp in PBTL mode, which effectively means mono (one channel only)
Click to expand...

I think starting off with the PBTL version is a good I idea so I began designing it on a PCB this time instead of a breadboard. I have all the SMD components to build it, however I am stuck on choosing the Gain setting. Also the chip should be in master mode? and how do I make sure it is.

I am also getting quite confused on what the SDZ pin does. Am I right that it shuts down the amplifier and be connected to around 2v to run? Should the /SD_LR on the schematic be connected anywhere?

This is what I have come up with so far. Also dont mind my pin numbering being backward

Thanks for the link to the "lunchmoney" thread. I have had a quick look though it a while ago and did actually buy kit from china and had a play around with it. I will definitely be having another look through it
•••
Show hidden low quality content
You must log in or register to reply here.
Share:
Facebook Twitter Reddit Pinterest Tumblr WhatsApp Email Share Link
Top Bottom