I'm racking a pair of Langevin AM17 (pre) amps, and having a devil of a time troubleshooting a problem. Both amps put out a reasonable level when tested with a mic. However, since one of the power transistors isn't conducting on each amp, and the other power transistor gets hot enough to fry an egg (a very small one), I need to figure out what the problem/s is/are (both amps have the same symptoms, except the output power transistor which doesn't conduct is Q9 on one amp and Q10 on the other.


Q7, the emitter follower driving the power xistors, is also not conducting. The diode, D1, in the base circuit of Q7 was open, but replacing it did not solve the problem. I also did some easter-egging by replacing the both Q7 and Q5. I disconnected and measured the output transformer coil,s and each one measures a reasonable resistance and inductance.


Understanding the theory of operation is outside my comfort zone, especially the negative feedback from the output power transistors to the opposite "channel" of the dual circuitry, which I assume is operating as a class A circuit. I've attached a schematic with notes and some hand written voltage measurements.


I would sure appreciate any hand-holding help someone could provide. 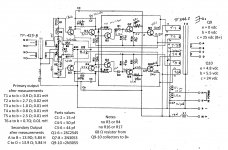 Good call. As old as that thing is (mid-'60s I guess?), it may well be littered with carbon comp resistors, which have a tendency to drift all over the place (high values go high to open, overstressed ones may go low).

Are Q9+Q10 identical in both amps? Circuits like that have a tendency to depend upon device matching.
•••
R

Have you checked the EB and CB junctions of every transistor? This can usually be done in circuit when powered down using the diode range on the multimeter.
•••
J

Hi Mark,
Thanks for the response. I did check the transistors in the "leg" that wasn't conducting. Since the other "leg" seemed to be normal, I didn't check those, but it's easy to do. I suspect there's something having to do with the feedback circuitry, which I don't understand well enough.


Thanks for the suggestions re: R1-2-5-6. That will be my next step. The note "no resistor" indicates that these resistors shown on the schematic are not on the PCB, nor are there any traces or pads for them. Must've been a mod to the shown schematic.


There is only one trim pot which smoothly adjusted for minimum distortion; but a shot of DeOxit D5 won't hurt. The solder joints look good. I replaced the original Q1-Q6 with low noise 2SC2545's, closely matching hfe of the complementary pairs.


Thanks again for the suggestions; always open to more of them. Can't believe how many hours I've worked on this problem, but I expect to learn a lot more.
•••
J

Hi sgrossklass,
Thanks for the response. Yeah, these are oldies with all carbon comp resistors (except for the wire-wound current limiting resistors in the 24v supply circuit. I've checked R11 and R13 and they're within the 20% tolerance of the original design. I'll continue to check the others.
The output power xistors are new, and the hfe are not terribly different. I usually buy a "bunch" for a closer match in the complementary pairs, but the individual costs of these guys prohibits that.
Thanks again for the suggestions re: the resistors. I'm beginning to think it'll be worth putting more effort into checking them.
•••
Show hidden low quality content
You must log in or register to reply here.
Share:
Facebook Twitter Reddit Pinterest Tumblr WhatsApp Email Share Link
Top Bottom