The wood-free* subwoofer enclosure: has anyone built a successful box for a “big” sub, 12, 15” or larger?

*A little bit of wood is allowed! You are permitted to make the baffle(s) that the driver(s) mount on because of the need for holding up the weight. Using wood blocks to hold screws, for glue joints, for bracing, etc. is allowed. You are allowed a very thin layer of veneer on the outside for appearance. Aw what the heck, ok we will allow very thin (1/8" or less) wood layers, multiple if you like.

The closest thread I've found re subwoofers was this:

Apparently even our resident genius xrk971 has never attempted anything so audacious. Even the intrepid Patrick Bateman has not been heard from; he was last seen under the front dash trying to install a Paraline version of a Klipschorn

Cost of material should be equal to or less than normal sub enclosure material, let’s say $30/sheet for birch plywood which is probably wildly optimistic.

High-tech eschewed. Note that you may use a PC for planning and design. But my goal is a simple box. Even I could design that Expensive exotic materials not allowed. Sorry no carbon fiber, even if it was scrap you stole, er, scavenged from work

This most likely disqualifies retail composite boards but quotes being accepted. Hardee board?

Similarly, the materials and box must be within reach of the typical hobbyist. This means nothing more advanced than normal wood shop tools. Sorry boys and girls, but you can’t use a 3-D printer, automated cutting and finishing, or the industrial laser that almost gives James Bond a vasectomy in “Goldfinger.”

Mass: usually people build with not-wood for weight saving; this is ok but not required for this contest. While I want a speaker for indoor use so I could give a rip about weight, the box should be heavy enough that it won’t blow away in a light breeze.

Strength of box: it is not required to be as strong as touring gear; those need to allow the possibility of a 300-LB drunken fan standing on top of the cabs, as well as the inevitable handing abuse by the orangutangs (sorry, “Roadies”) nightly.

Acceptable performance: enclosure ideally is at least as sound-dead as a MDF box; at minimum, no hums, buzzes, etc. during a sine sweep at high dB.


What I am going to try: I've recently graduated to "horns," or those who have the poor luck to be aware of my endeavors, half-assed copies of Danley Unity waveguides. Next step is to scrap the Frankenclosure (my 2014 sub build), and use the Alpine SWS-15D4 in a "normal" (sealed box) for the 0-100 Hz-ish range. Thus the request for proposal for cheap materials.


This is the on-hand driver I'll try. Specs say it only needs 2 cu. feet for a sealed box; bigger is ok. The enclosure only has to be strong enough to not collapse with the weight of the driver or the horn on top (which probably weights less than the subwoofer!)

A brick enclosure would meet all of your stated requirements. It certainly wouldn't blow away in a light breeze.

If it had to be portable, I'd suggest re-purposing an existing container, like the pictured wheelie bin.

Put a sack of rice in it to give it some stability, and another on top to keep the lid from rattling. Hard to beat that for ease of assembly

Thanks for the rubbish bin suggestion! I woud be the first to concede my ideas (and most builds thereby) are trash, but that would be taking matters too literally
•••
S

A plastic 15 gallon drum/barrel many times seen on craigslist for sale for under $20. I have several that were given to me free by a dairy farmer who had stacks of empties. Diameter is plenty for a 12" driver and by adding a thin baffle to the top could easily fit a 15" or 18" driver. Those drums exceed 2.0 cubic foot volume slightly, but add a layer of concrete to the bottom and Bob's your uncle.
•••

I've heard tell of the Redneck Sub, which is similar to the above suggestion except a 5-gallon paint bucket is used. I am still working towards a normal-appearing rectangular or cubical box that will sit on the floor and have a 24x24" waveguide on top (same unit, or two units, I'm still deciding...)
•••
Z

Concrete has been used as sub enclosure and might be similar in price to birch ply.

What about making the enclosure out of drywall? You probably would want to use the money you saved woth drywall to buy sound dampening materials
•••

*A little bit of wood is allowed! You are permitted to make the baffle(s) that the driver(s) mount on because of the need for holding up the weight. Using wood blocks to hold screws, for glue joints, for bracing, etc. is allowed.
Click to expand...

This is wrong, the opposite is right, which consists in mounting the driver very tight with the baffle, i.e. coupling mechanically ( and, as I know, the wood de-couples....)and this can be done using the same material as the chassis/basket . Threaded rods & C. can be part of the baffle itself, when you have the ability to cut a metal baffle it should be easy
•••
D 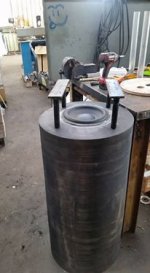 10" driver mounted in an old rubber bumper from the port next to the workshop with 1" steel pipe for feet. Pretty much bang on 2cu internal volume. Driver screwed straight into the rubber with 3" wood screws. The entire thing stands upside down, has a thin ply top that contains speaker terminal and the ports.

Met everything aside from the weight saving...it's easily over 100kg.
•••

XPS is your friend. With enough XPS bracing and maybe some cardboard and latex caulking and triple ply cardboard thrown in for rattle suppression with CLD, you could make a 12in PPSL sub. Invert 1 of the drivers for push-pull so you reduce even order distortion (up to 30dB reduction of 2nd order and it works better with cheaper drivers). You could couple the drivers tightly with bolts and threaded rods in order to better reduce cabinet vibration (might not be necessary with the self-damping of the XPS)

If you can splurge for an extra driver and have the space available opposed mounting (whether on the sides or in a slot) is wonderful. My 400 liter dual 15" PPSL monster sub vibrates a lot less when pumping 110dB then my small 35 liter single 10" doing 95dB.
•••
D

If you want cheap with good performance and don't care about weight I think poured concrete of some sort would probably be a good solution. Maybe pour each half separately and then glue them together? You could likely borrow some techniques used for concrete countertops if you wanted to make it look nice.

Fiberglass used to be used fairly extensively in car audio. Not sure it would be meet the cost criteria, but if it were used as a component of some type of hybrid system (like fiberglass mat over a wire grid or other framework) might get something workable.

How about the heavy cardboard tubes used as forms for concrete piers? Looks like a 12"x48" from Lowes is <$10... just cut to length and figure out a couple baffles for the ends. Bigger diameters are probably thicker/stronger cardboard.
•••

One of these day I'm going to build a sub with one of these. I see them free on Craigslist all the time.

Large diameter industrial PVC pipe. For sewage systems it is available in -roughly- 8inch /20cm 10inch/25cm diameter with wall thickness of some 0.7 inch.

Little MDF or Plywood is needed to mount the woofer, or woofers if top and bottom are used. Bottom and top disks can be held together with threaded steel rods (ca. 0.3 Inch/8mm), with nuts screwed on.

Very simple: has been done for ages.

djn said:
One of these day I'm going to build a sub with one of these. I see them free on Craigslist all the time.
Click to expand...

Zonneschimmel said:
Invert 1 of the drivers for push-pull so you reduce even order distortion (up to 30dB reduction of 2nd order and it works better with cheaper drivers). You could couple the drivers tightly with bolts and threaded rods in order to better reduce cabinet vibration (might not be necessary with the self-damping of the XPS)

If you can splurge for an extra driver and have the space available opposed mounting (whether on the sides or in a slot) is wonderful. My 400 liter dual 15" PPSL monster sub vibrates a lot less when pumping 110dB then my small 35 liter single 10" doing 95dB.
Click to expand...

That was the plan to have one flipped with magnet out but I miscalculated the clearance required to slip the driver in with the bezel of the other one sticking out. Off by maybe 5mm.

The bolts to hold them mechanically rigid is a great idea - it would really make it quieter as the opposed motion is already vibration cancelling.
•••

A long time ago (mid seventies) Wireless World featured an article in which KEF B139 s were indeed placed in a -albeit unused- toilet. The whole contraption was supposed to function as a horn-like system. I vaguely recall a certain Dinsdale wrote the article.

So once again, there is nothing new under the sun.

Nobody's come up with the obvious - Cardboard tubes for making concrete pillars?
Granted, they're very much like MDF, so maybe they're a bit to close to illegal?

They're only 4mm thick, though, and can be used as a foundation for fibreglass.

Fiberglass can also be used. Make a foam shape, add a wood frame for the driver, and add multiple layers of fiberglass. Dig out the foam afterwards. The car stereo guys have been doing this for years.