I'm exploring some headphone amplifier designs, all OTL. It seems simple enough to attenuate any DC voltage from the output voltage terminal by putting in an appropriately sized coupling capacitor. However, to preserve low frequency gain, the capacitor values I'm looking at imply an eletrolytic.

That electrolytic capacitor could eventually be all that's isolation a listener from dangerous DC voltages. Given that headphones go on one's head, I want to fully understand the safety implications here.

My understanding is that when electrolytic caps fail they tend to fail open circuit-- which OK from a safety point of view.

Can anyone comment on how safe a headphone amp with an electrolytic output capacitor is?

An example is the 30 uF cap in each of the schematics shown in the link below.

Joined 2012
A well made electrolytic capacitor won't fail any time soon. If you are really worried about it, just use a film cap. Anything 100uf and below can easily be found as a film capacitor.

You could also try using a bipolar PSU and use a DC servo at the output and just get rid of the output cap all together.
•••
M

Joined 2018
I would suggest using TVS diodes for this purpose, many are rated at kW of peak pulse power (they are basically bidirectional zeners optimized for protection) and should force some other component to fail - ie use a suitable fuse in the power supply. Chose TVS voltage large enough for your max signal voltage at the 'phones.
•••
A

Joined 2005
Comments on the safety of a headphone amp with electrolytic coupling caps - it's totally fine and there's no concern. Just be sure that as the caps charge, you don't have some 100V spike at the headphone jack in the process.
•••
6

Joined 2016
That is exactly the problem.

Cap coupling from a plate or cathode that is at 1/2 of B+ voltage will output that voltage until the cap charges up.
And, when the amp is turned off, when the B+ drops, then the cap discharges through the earphones (at 1/2 of B+, only it is a minus voltage (-) this time).

A current limiting resistor in series with the cap, and pair of series Zeners connected in opposite polarity, with one end at the cap output, and the other end connected to ground will limit the transient amp On and transient amp Off voltages. The voltage is limited to the Zener voltage value.

Joined 2019
One would hope the B+ comes up more slowly but in this case its quite a big o/p cap. You could use an isolating transformer - even with a step down something like A262A2E (OEP)
•••
T

Could you post a schematic of what you're talking about with the Zeners? I'm not sure am visualizing properly.
•••

Joined 2011
classic-audio.co.uk/
The thing to really do here would be to use a high value electrolytic of say 470uF or so, in conjuction with a muting relay across the output to shunt any nasty HV on start up straight to ground.


Having said that and looking at the headphone output in question, it seems that having a triode between the HV and the output, as opposed to say a resistor that would start passing current as soon as the HV appeared, will be sufficient to prevent HV spikes appearing on the output after start up. Cathode followers always power up very nicely due to the inherent delay in conduction as the filaments warm up.
•••
B 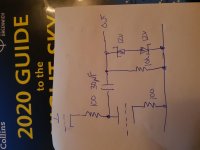 Joined 2012
Baudouin's schematic is just fine. Could I also recommend a ½ amp fast-blow fuse in line, too? That way, if the 12 V Zener stack is conducting too aggressively on a blown capacitor, well … the fuse will also pop. Probably saving the Zeners, and debugging them, and all that.

Baudouin's schematic is just fine. Could I also recommend a ½ amp fast-blow fuse in line, too? That way, if the 12 V Zener stack is conducting too aggressively on a blown capacitor, well … the fuse will also pop. Probably saving the Zeners, and debugging them, and all that.
Click to expand...

I doubt you'll be able to get half an Amp out of the cathode of most triodes... Perhaps a fusible resistor? But that of course comes with the penalty of reducing damping factor.
•••
T

monty78pig said:
Cathode followers always power up very nicely due to the inherent delay in conduction as the filaments warm up.
Click to expand...

Yes, it's this. The question here is not how to completely eliminate any possible DC offset from ever coming out of the headphone jack, it's whether this is an actual issue.