Has anyone seen this speaker or heard one - need advice

Hi Everyone , does anyone have any experience with any Zenith 12 inch Speakers? 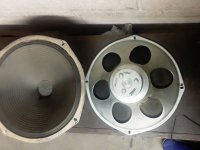 Hi - I need advice is this a good prospect for a full range speaker - I was thinking maybe it came out of a old stereo consul ........ has anyone heard one?
•••

I wouldn't go that far. Some of those old Zenith/Motorola/RCA/Magnavox consoles sounded pretty good, considering the era. Those were usually two-way affairs; three-way systems were pretty rare. The drivers pictured definitely look like woofers to me.

Do you currently own these, or are these an anticipated purchase? Either way, if I were going to use them I'd be prepared to measure and experiment. Looks like fun regardless!
•••

Mr_Zenith said:
Do you currently own these, or are these an anticipated purchase?
Click to expand...

These are currently available on ebay.com at a buy it now price of $79.
•••

I have seen that driver. 1st tru it out in a simple OB to get a quick feel for it.

Some of these are very surprising and it is worth having a listen.

To do proper box for it will require measuring T/S so you have a starting point.

OK, build date is the 46th week of 19x9, though don't know when [if ever] they changed baskets, but used a number of Zenith 12" with this basket [among other same-same brands] from the '50s era 'open' back consoles I gutted.

FWIW, I put all the different brand console 12" in ~ 48" x 18" square [or some ratio to get ~5 ft^3] vented tower [floor loaded MLTL nowadays] loosely stuffed to 'taste' with fiberglass, felt/whatever used insulation I could find. Tuning was ~50 Hz.

With a cheap Motorola horn out of the better consoles capped off with it's usual 2.2 uF, it made for a nice 'toe-tapping' ['party'] speaker system for us [then] young folk's bed/dorm room, apt., mono/stereo system when coupled to the console's or similar tube amp.

You pump any more than 5 watts into those old speakers and you'll fry the voicecoil.
•••

Pump any more than 5w into them and you are likely to go deaf. It is a moot point AFAIC.

- Thanks guys, I found some information at a website called - glowinthedarkaudio/speakers .. the site had some good info on several of the Zenith drivers ..... then from there tracked down some reviews of the Zenith 49CZ852 Speakers on some other forums - that was the one that the guy from glow in the dark highly recommended and liked better than the rest of the full range drivers he tried. I found a lot of people are really happy with that speaker - so I jumped in the river and did some bidding on eway - eventually I found a pair for me try out... on one pair I was trying for, the bidding went over $500... they were a really nice looking pair , but --- Ouch...
-- It has definitely become a hot commodity over there, mine cost me a lot too.... so here's hoping it lives up to all the hype -
-- I will keep you posted on how it turns out. . . .

True, i have similar old alnico Seas woofer where i don't have any specs from, but 2.83v gave me a response of 98dB from that 12" woofer from an old 1950's jukebox. That speaker probally also can handle a few watt, wich is enough for that. It was originally powered with an EL84 in SE config (one for the woofer, one for 2 tweeters) and it was used like that for decades in a local pub as party machine and could fill the pub enough to have a party. Those type of woofers have a high qts and don't go low, mine goes from 5K to 60Hz, wich was very good for that time.

It was trashed when the vinyl time ended and the pub closed as the owners retired. They gave me the old beaten up machine wich had serious issus (dead amps, broken turntable system and a broken case), and it was for years in storage until i got bitten by the diy virus and i dismantled it for parts... I've used those drivers in in experiments, but at the moment it's in storage until i find a use for it. And no, i'm not selling those.

I guess those Zenith speakers are very similar , very high efficient, high qts but low power and not going very low in frequency response. Best use will be in a high efficient/low power OB system. And even if you find some specs of them, they won't be like that anymore so measure them fully before you build something with it. Specs change when drivers get old, (wich is not necesairly a bad thing).
Last edited: 2020-03-10 4:52 pm
•••

- Hi waxx , Thanks for the great information , I'm looking forward to the project. - I found lots of great reviews from people on other Forums who have tried the Zenith 49CZ852's --- I won two separate pair off ebay - In one bidding session a pair went for 512.00 + shipping - I backed out of that one - a little too rich for me .... LOL. I'm going to try some different set ups, including a D'Appolito with the two pair of drivers , I also think I'm going to try another vintage idea and build the Open Baffles with sand between two layers of wood, Like Wharfedale SFB-3's ---- I picked up a bunch of vintage tweeters to try too - bought all at great prices. I have several ALNICO tweeters to try and horn tweeters too , also going to try adding the GR Research NEO-3 Tweeters in the OB set up - to try to add some new to the vintage ..... And for Bass I picked up several pairs of vintage 12 inch woofers to add to the mix - found some Wharfedale Alnico's , also found some 15 inch Sansui woofers too....... were going to have some fun ---
•••