Hey guys. Thought I'd throw up some specs on a ghetto subwoofer build I did for the workshop I'm using.

Long story short, we have a shitload of 10" Peerless XLS subs, a heap of Jaycar 240w plate amps and I had some spare time. I initially wanted to build everything into a folded horn or some sort of ridiculous box, but then I found some rubber bumpers around the back. Dimensions are 500mm OD, 250mm ID, 1000mm high (and weighing approximately 100kg). Figuring the sub would be pretty close to mounting in there, I started doing some modelling in BassBox.

Driver specs (thanks to caffeine_addict):

I didn't really take any photos of construction, but essentially I mounted the driver (and used some industrial adhesive to ensure it was sealed as that rubber is terrible to screw into), used a 1" spade bit to drill 100mm into the rubber in 4 equidistant points, hammered some 1" steel tube into the holes (very, very snug fit) and then welded some flat bar across each pair of tube. You can see the bottom in the attached photo. 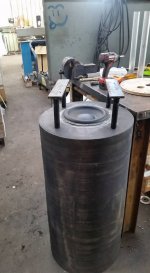 Flipping it upside down, the tube is quite stable so the feet were a success. Next I build the top plate out of some 18mm ply, including the ports. Ports were routed at the top of the mounting plate (not pictured) then resealed with more industrial adhesive. When the attached photo was taken, I used some three core power cable (ghetto as ****) from the amplifier to the sub and nothing was sealed - output was ALL at 40Hz and dead by 80. 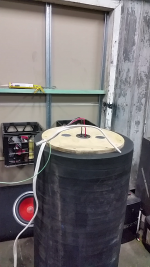 Since then, the ports have been routed on the top to reduce port noise (which really didn't work), everything has been properly sealed, and the plate amplifier has been mounted in a box with temperature-controlled cooling using 2 PC fans (switch on at 50 degrees, switch off at 45). Before cooling, the amplifier would easily hit 65 degrees after around half an hour of operation, after cooling it sits nicely at around 48 with ambient temperatures approaching 30.

Now, how it sounds. The best way I can describe it is LOUD. Port noise is quite obnoxious at anything above 50% volume with the LPF set at 50Hz, however any louder than this and the tin shed walls vibrate phenomenally. With the LPF off, there's quite decent response all the way up to 100Hz, but it seems to make the port noise more noticeable. Typical response of a ported sub - definitely lacks the quick response for metal or anything fast, but sounds excellent for rap. If I have time I'll do some measuring of SPL next week and grab some better photos tomorrow.

It's definitely not the best designed sub out there, but for something that only cost me 2-3hrs labour it was well worth it!
•••
S

You might be better off sealing it up. There's certainly more bass above 40hz than below 40hz in music. And then you could use all of the bandwidth. Try stuffing up those ports with something. At least until you can get some bigger port tubes.

Samps said:
You might be better off sealing it up. There's certainly more bass above 40hz than below 40hz in music. And then you could use all of the bandwidth. Try stuffing up those ports with something. At least until you can get some bigger port tubes.

Did you make more than one?
Click to expand...

I only built one, however we have ~80 subs and amps so I could easily do more.

Sealed it loses a lot of volume but sounds flatter. Response is ok when ported, just super noisy. When the volume is turned down to a reasonable level the port noise isn't too bad.

If I can wrangle some bigger port material I will go up in size, I think something around twin 100mm will drop port velocity down significantly, but will be much longer (hoping they would fit).
•••
B

Why do you have so many Peerless XLS subs, and do you want to get rid (sell) any?
•••
D

BeauB said:
Why do you have so many Peerless XLS subs, and do you want to get rid (sell) any?
Click to expand...

They were donated to my workshop. We're slowly putting them in their (recommended) enclosures and selling them off as an active sub.

I don't think they want to part with them separately sorry.
•••
D

Finally got around to taking some better photos. 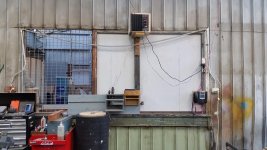 Here's the sub in it's final position, with the amplifier cube mounted high on the wall. Now it's in against a wall the response seems to be slightly better better, needing to turn the volume down a heap more seems to have reduced port noise to something acceptable. 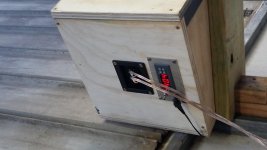 Also a photo of the temperature-controlled fan setup. Even this afternoon when it was pretty warm the temperature never really went over 40, so I've turned up the on-point by 5 degrees. 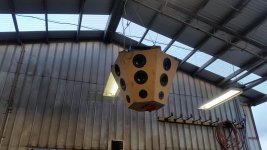 Finally, here's what the noise is coming from. This was built for a music festival a while ago, and is now suspended from the roof. Gets great coverage and fairly decent response from the speakers (all Seas drivers).
•••
B

Have you tried to sleeve the whole thing into another larger sauna tube?
Or start with smaller tube then sleeve into larger and sleeve that into larger blocking off one end of each tube as you go like a long cylindrical TL cab.
Also as you block off the ends, its better to have a dome shape rather than flat. but flat works for playing around.
•••
B