Hi diyaudio! I have a small room, that I want to make my cozy mini home theater. It's only about 10 x 10, and I have to get creative with the little space I have available, with another condition being that it has to look good. One big problem that I've agonized over is where am I going to stick the subwoofer(s)? While a lot of the commercial offerings and diy subwoofer projects look good, they often have footprints that leave me teary eyed and wanting. So, I'd have to design something myself! What this project is going to be is a mid century modern styled console, with two subwoofers located on each end of the console. It was very much obviously inspired by member onni's build right here on diyaudio: Dual subwoofer/media console - diyAudio
Right now I'm still in the design stages, and I'm trying to get down the look and picking what size subwoofer drivers I'll be using. This second console has two ten inch drivers, and a very subtle change in look and build. Both consoles would have the drivers flush mounted, with the difference being the 10 inch driver would be flush mounted on the yellow mdf, but recessed behind the grey mdf. And my listening preference is about 40% music, 30% gaming, and 30% TV/Movie watching. What do you guys think? Which of the two consoles would you choose, for either how it looks or how big the drivers are? I'd like to get feedback on everything from construction to driver size.

When it comes to woofers, the bigger the better. Flush mounting for woofers has no effect whatsoever.
•••
N

I know it has no effect, I just like how it looks. Good to hear I should go bigger, just wary that it'd be too overpowering in my small room.
•••
M

I suggest you start with playing around with those online subwoofer calcs/simulators and whatever drivers you think look interesting.
Last edited: 2016-01-17 11:11 pm
•••
N

I could possibly fit four ten inch drivers that, two opposite from each other on each side. Would I have to increase the the volume for that? With bracing added on, the internal volume would be about 2 ft³. I'm also looking at these subwoofers from Dayton : Dayton Audio RSS265HF-4 10" Reference HF Subwoofer 4 Ohm
•••
N

And if I did go ten inch, what would you recommend yourself? I'd prefer to have cheaper drivers that are solid performance wise, but if y'all have any preferences for what I should pick I'd definitely consider em.
•••
O

adason said:
When it comes to woofers, the bigger the better. Flush mounting for woofers has no effect whatsoever.
Click to expand...

(From what little I have learned very recently) All other things being equal I agree, i've been playing with winisd recently with some readily available drivers and on screen the 10 inch driver looks a lot better than the 12 for a given enclosure size.

OP have you considered using down firing subs? better from a WAF and kids kicking the cones in perspective.

here's a sim of the dayton sub you have linked (take with a grain of salt, i've only been using winisd for a few days) 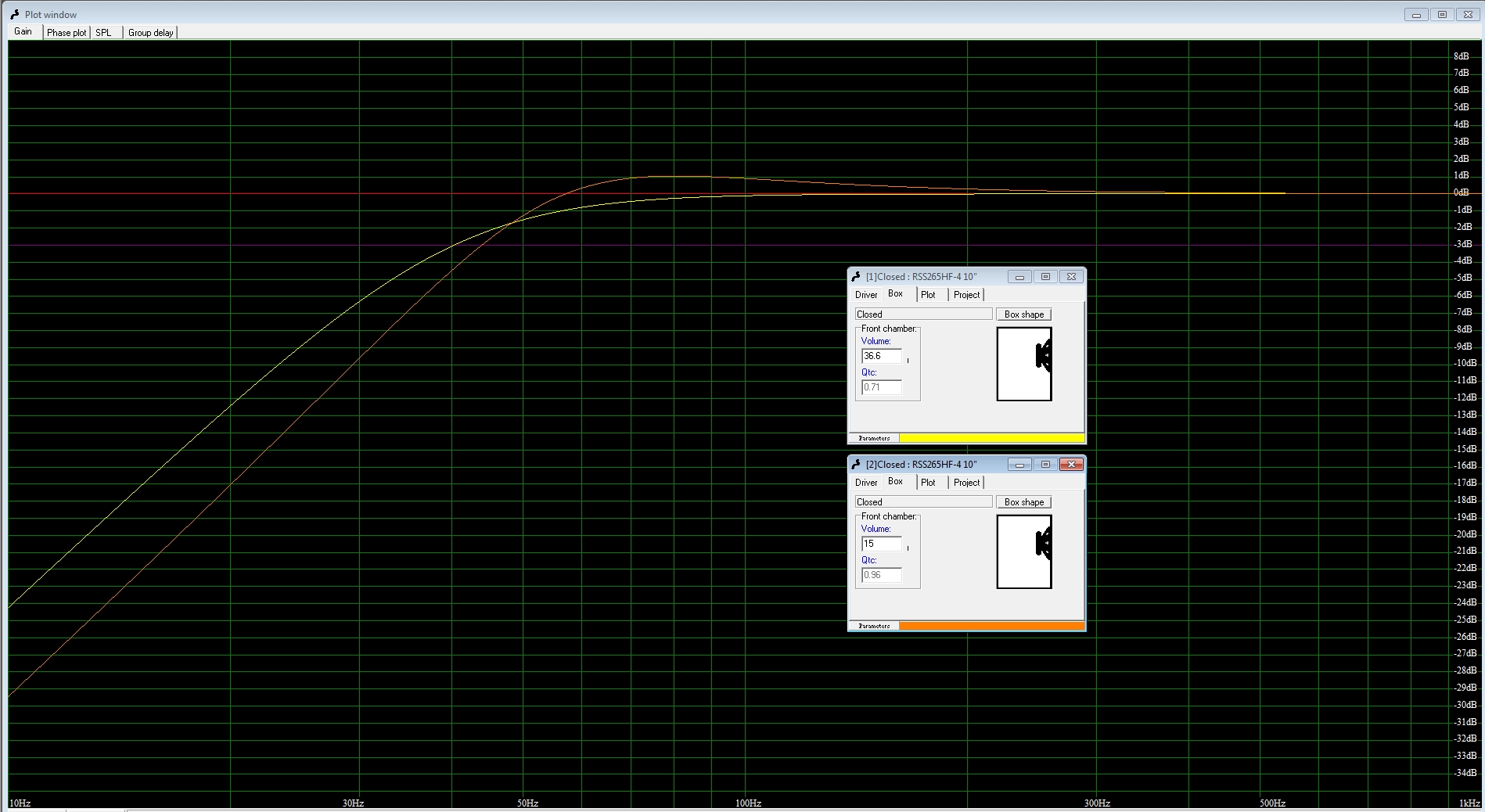 the orange line is with the parts express recommended sealed volume (0.53), the yellow line is what winISD decided was right (1.293 cubic feet).

personally i'd go with the bigger volume, the upsides being slightly lower frequency capability (you could go even bigger if you wanted) and flat response, but if you want "thumping bass" the smaller volume could be better.

seasoned experts please feel free to point out the flaws in my thinking!

get winisd and play around with some stuff, it's pretty easy to use and gives you a better idea of what is going on than online volume calculators.
•••
N

Yeah I'll have to give that a try. I have a fixed internal volume that I have to consider, which is 2 ft³, but I could always over brace inside to bring the volume down. Oh, and the waf is non existent here. Same for there being kids. All the people in my household are adults, and I like how the front firing subs look. It'll look similar to Symbol Audio's products.
•••
O

No kids? will make it easier to build too.

Yeah, there's never too much bracing from what I've seen. I guess ten inch is what I should go with than? Other than the Dayton drivers, what other subwoofers should I look at?
•••
O

NocelCrown said:
Yeah, there's never too much bracing from what I've seen. I guess ten inch is what I should go with than? Other than the Dayton drivers, what other subwoofers should I look at?
Click to expand...

no idea, parts express has a good subwoofer chooser, sort the list by whatever is important and see what comes up, then download winisd and see what they look like.

as you have the room for them i'd definately look at some 12s too, I want to use 15s (or even 18s) for my eventual build but it all comes down to how they perform.
•••

NocelCrown, do not forget isobaric. Half the volume required.
•••
N

Adason, are you suggesting I could try a cone to magnet or magnet to magnet type enclosure? I'm not that familiar with the concept, could you explain what the benefits would be?
•••

I don't think my problem is volume. Each compartment of the console is 12h x 20w x 20d, but internal volume would be less than what that gives, but greater than 1.8ft³. I have to get home to measure what the exact volume inside would be without driver displacement or bracing added to the mix.
•••
D

10'x10' room means your absolute SPL requirements are a lot lower and, even with wall flex, you're going to get more room gain than most. With ~2 cubic feet per bin, there should be a number of car subwoofers in the 10-12" range that will move your guts around pretty well. Alpine SWS and SWR drivers may well be worth a look (and the Infinity 1260w from Amazon is a budget-winner). Look for low-Qts drivers, primarily, and think about going for a very low-tuned vented alignment.

E.g., just did a quick model in Hornresp of a 50l box using an Infinity 1260W--4" vent tuned to 22 hz hits a knee in output around 27 Hz. Displacement-limited (probably optimistic!) output at that level is 110 dB/1m firing into 2 pi. Given the length of the vent, might be smart looking at a way to turn that into an ML-TL (mass-loaded transmission line, e.g. a hybrid vented arrangement)

I don't think you're going to gain much other than pain from a 4x10 vs a 2x12. I sure as heck wouldn't suggest an isobaric setup, as that arrangement both kills the look you're going for and the extra driver+hardware to make it work will probably eat as much of your volume as you gain from the arrangement. You're already in the "disturb the neighbors" range. (Especially assuming the small room means you're probably somewhere higher population density)

As an aesthetic suggestion (and I've thought about this kind of a design quite a bit for very similar reasons to you!), think about putting a nice acoustic linen front grill to hide the woofers. Fits the era and looks pretty good IMO. (might make overall construction easier too!)
Last edited: 2016-01-18 8:52 pm
•••
N

Derfnofred, so if I go by your suggestions, would it be as easy using the infinity subwoofer, as moving it sideways on the baffle and and a four inch port tuned to 22hz? Or were you suggesting something else construction wise? Considering the baffle has a width of twenty inches, that shouldn't be a problem to implement
•••
R

Love the mid mod design. I hope you post pictures when your finished. You may want to check out the SB Acoustics SB34SWNRX-S75. It would work well sealed with a little bass boost or use the matching passive radiator. The sealed would need about 1.5cf and the passive radiators would need about 2.2cf. I haven't used this subwoofer myself but I have used other SB Acoustics drivers and you get a lot for your money.

Matt, that's a good looking woofer and it has a good price too. I can't seem to find the matching passive though. And how would I go about getting that little bass boost? I was thinking about using a miniDSP product to equalize the subwoofers to my room a bit.
•••
R

Yes, the minidsp would be a good way to eq the bottom end or you could use a subwoofer amplifier that has an adjustable bass boost. With the minidsp you would use the Likwitz transform. The part # for the matching passive is SB34NRX-00. Hope this helps.